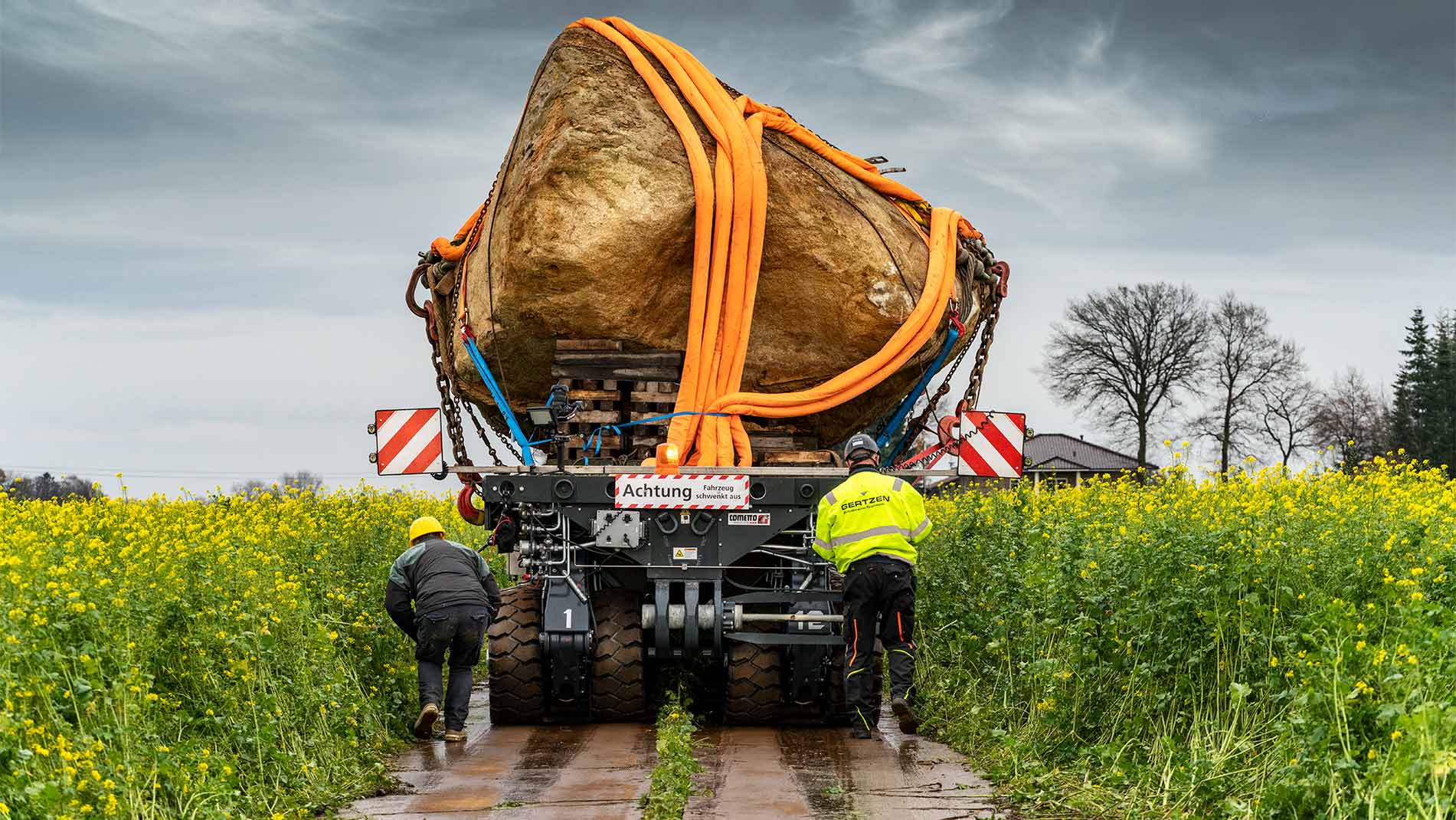 Salvaging a boulder in Emsland

At some point in 1950, the then fourteen year old Josef Dörtelmann was trudging over a field owned by his farmer family in Emsland with his father’s plough horse. The boy and horse were tilling the soil in the field not far from the village of Hüven, when the ploughshare unexpectedly struck the tip of a large rock buried just under the surface.

Get out of my field!

And it is here, almost exactly in the middle of the last century, that our story begins. A Liebherr mobile crane brought it to an end last December. Mobile crane operator and heavy haulage logistics contractor Gertzen, based in Emsland just like the underground rock, salvaged it and then erected it on Hüven’s village green. A field study. A field report. 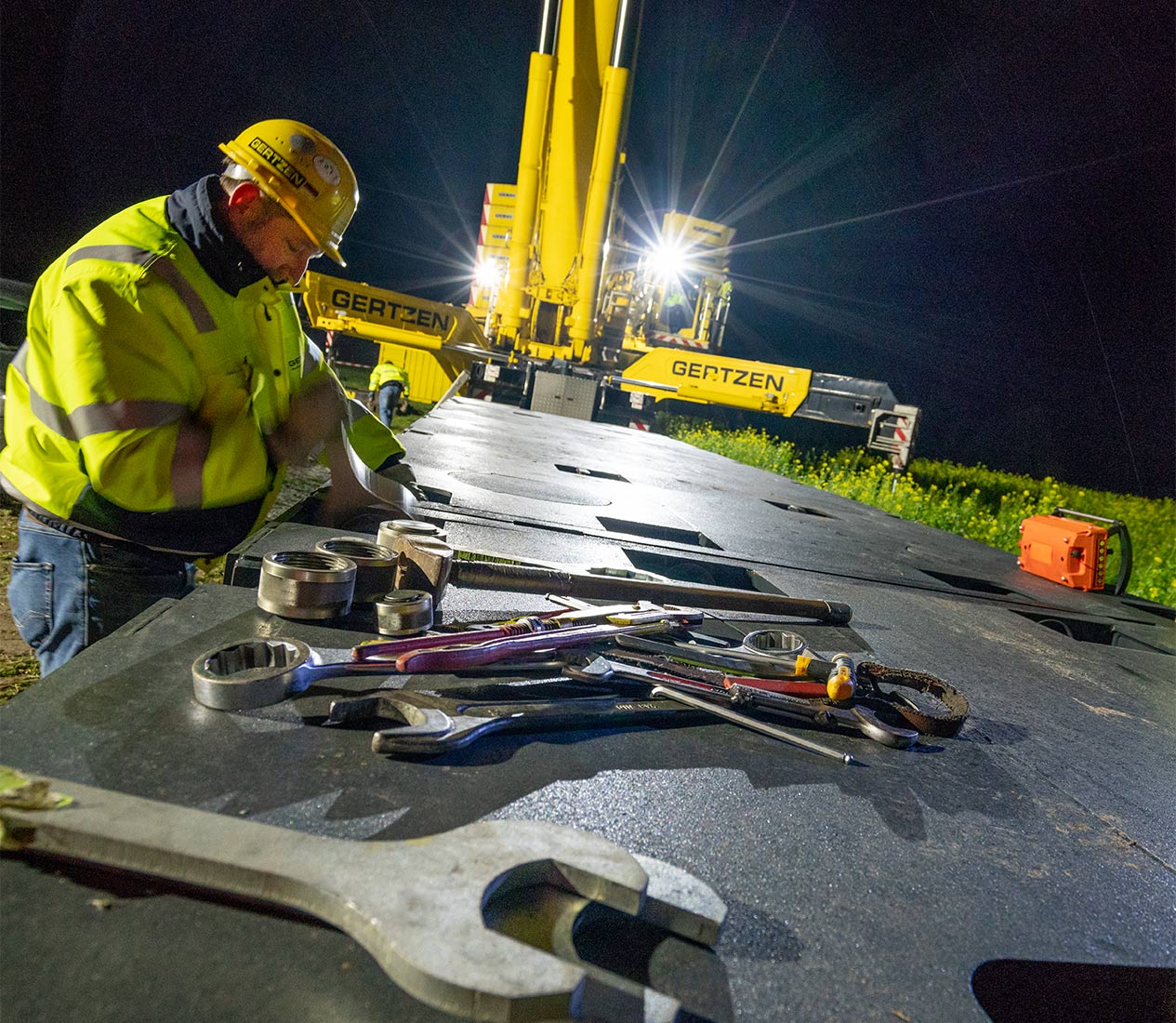 “It was almost exactly 70 years ago that I first stumbled over the rock with my plough”, says Dörtelmann, who, at a ripe old age, visited “his” massive pebble in the field for the final time in December, shortly before the boulder was salvaged. For decades, he had had to drive round the troublesome stone resting just below the topsoil, more successfully on some occasions than others. “After forty years, I attempted to lay the thing bare”, he says. However, whilst attempting to dig it out, the rocky lump seemed to become ever larger, and the size of the exposed rocky surface simply grew and grew. When it became plain that there was no end to the increasing size of the rock, Dörtelmann finally admitted defeat to his underground nemesis. And then he simply covered the whole thing over with sand.

He spent a further three decades working the land (the farm’s fields have long since been tilled using the modern machinery owned by Dörtelmann’s son) before another attempt was made to survey the bane of his agricultural life. With a bucket on the front loader of his tractor, Dörtelmann junior started to dig out the rock last summer from one side.

We are prepared for a load of up to 148 tonnes.

The trench in the field became ever deeper and longer. But at some stage, he also had to put an end to his efforts with the tractor: “When I reached two metres, I thought the risk that the soil would simply collapse inwards had become too great.” But this did not see an end to the family tradition because the farmer decided he really wanted to know how big the rock actually was. So he obtained an excavator from a friend and then, after many hours of work and many excavator bucketfuls of soil, the boulder was finally revealed in all its glory. The rocky colossus lay in its earthen nest like a misshapen egg. 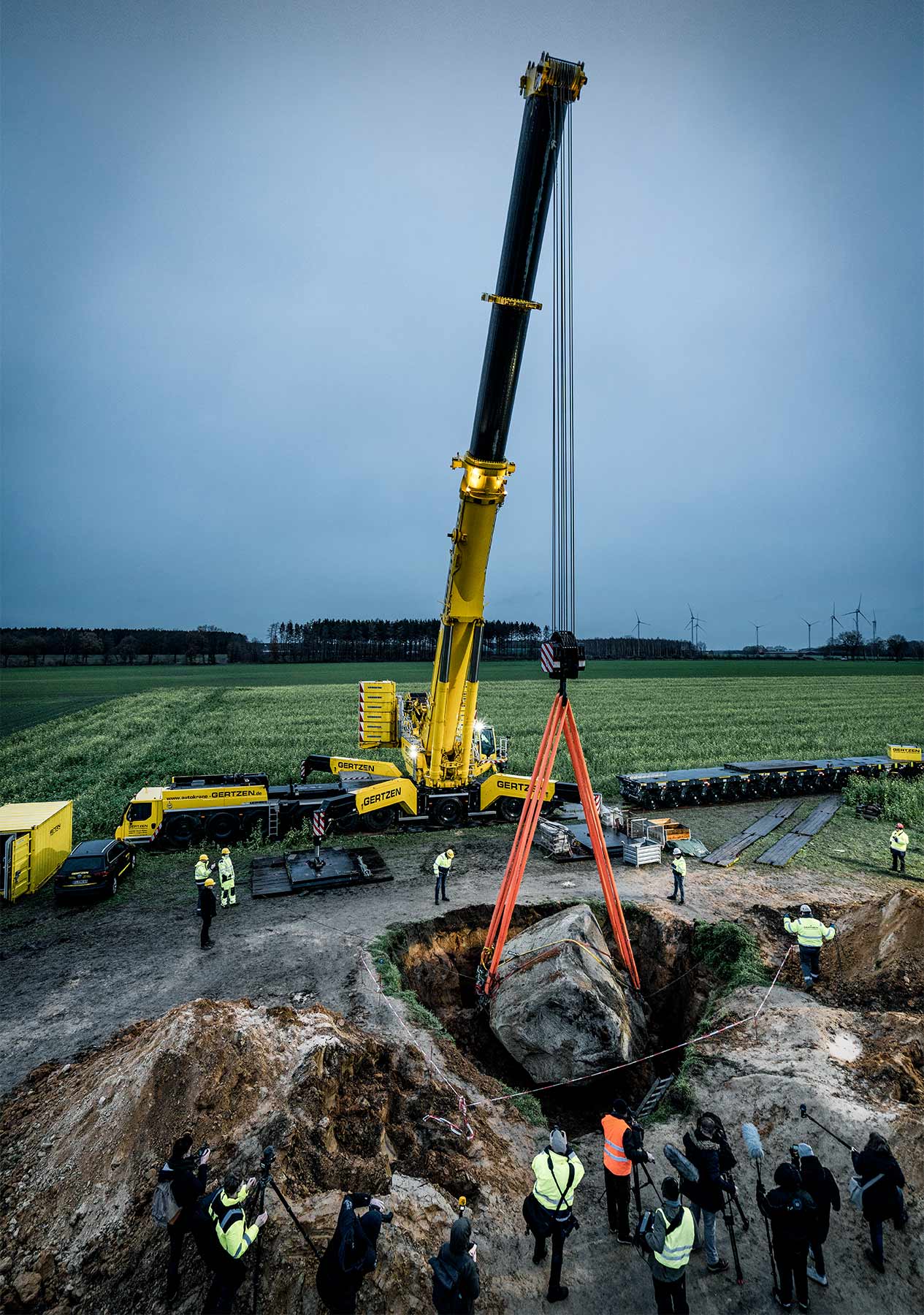 Managing Director Wolfgang Gertzen used the most powerful crane in his fleet, the LTM 1750-9.1, to salvage the boulder.

On some days, hundreds of curious onlookers came to marvel

The notoriety of the “Boulder of Hüven”, as it became known in the newspapers, grew quickly. It soon started drawing large crowds to the area. On some Sundays, Hüven’s Deputy Mayor, Alfons Kohne, estimated that up to 400 onlookers found their way to Dörtelmann’s field. After all, the boulder is one of the largest rocks ever to have been found in Lower Saxony. State geologists also travelled to the site to study, record and appraise the rock. The initial estimates of the experts calculated the rock’s weight at around 70 tonnes. Alfons Kohne was able to engage the services of mobile crane and heavy haulage contractor Gertzen, based in Kluse around 20 kilometres away, at acceptable terms, to hoist the boulder out of the field and transport it a few kilometres away to the village of Hüven. For Managing Director Wolfgang Gertzen, this rather unusual job in Emsland was something of a local affair. And it was also a matter of course for him to become deeply involved. “The whole thing turned out to be almost a work of charity”, Gertzen admitted when asked. Initially he thought his Liebherr LTM 1500-8.1 would be perfect for the hoisting work.

The erratic came with a glacier from Scandinavia

However, before the end of the tale, the crane contractor was going to have to demonstrate an even greater level of loyalty to his local area. Another survey by the Geological Service not only discovered that the boulder had been pushed from Scandinavia by or in a glacier during the Saalian Glaciation, the last but one ice age, more than 150,000 years ago, but in addition the geologists decided, after taking accurate measurements and rock samples, that the star in the trench was actually in a whole different weight category and comprised 100 to 140 tonnes of granite. This made it obvious that a more powerful crane would be required – definitely a case for the flagship in the Gertzen crane fleet. 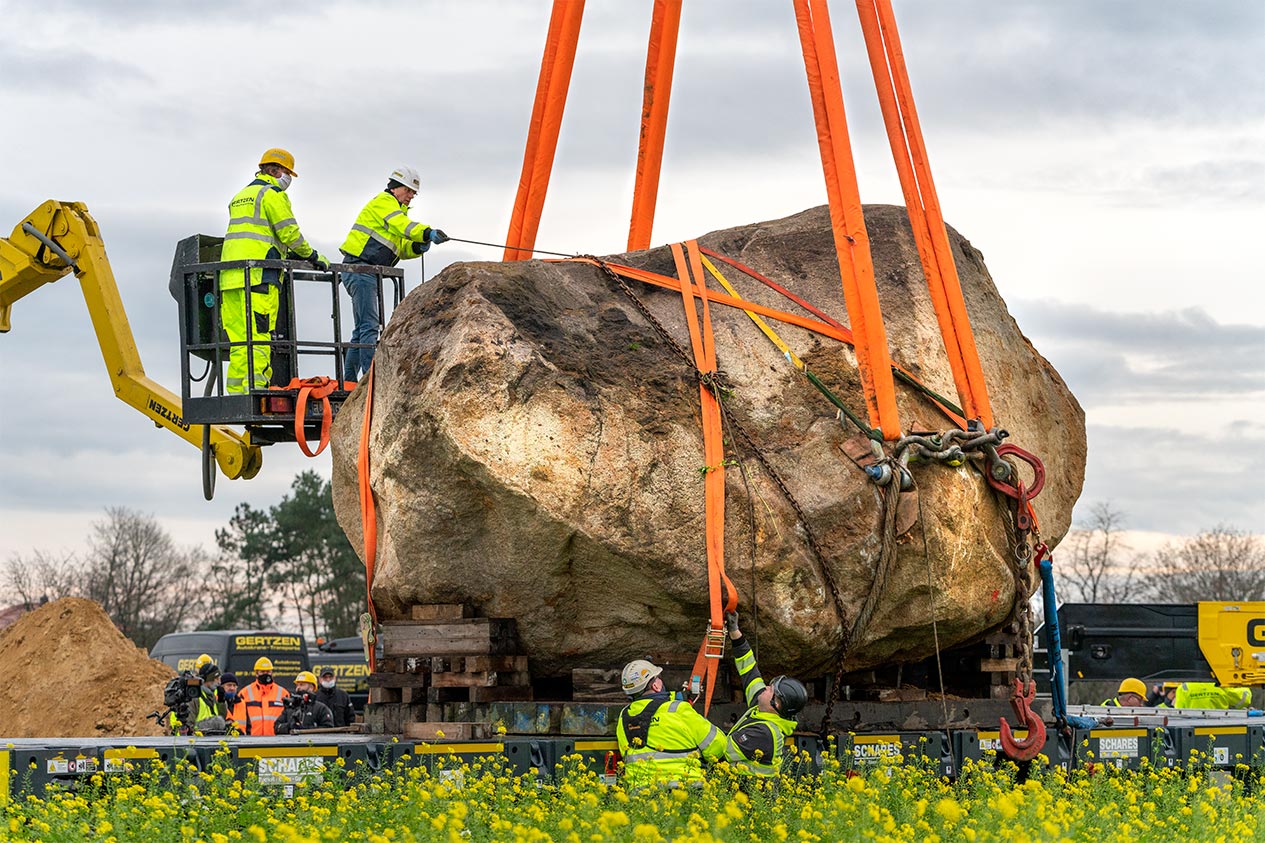 Piggyback: Project Manager Franz Gruber joined in with the operation from a cherry picker. Massive chains and lashing straps were used to secure over 100 tonnes of granite to the special transporter.

And so, two weeks before Christmas, the Liebherr LTM 1750-9.1 rolled up to the undulating yellow and green mustard field. By that time, the exposed boulder had been declared a natural monument so as to prohibit any drilling into the rock. It also meant that Gertzen’s Project Manager, Franz Gruber, and Dieter Hilgefort, the long-time operator of the 9-axle crane, would have to do attempt to remove the gargantuan rock with silk gloves rather than coarse work gloves.

Although they are old hands in the crane business, handling the heavyweight rock was far from straightforward for the two seasoned professionals . The enormous boulder with a circumference of around 15 metres was immobile in the deep hole. Support was provided for attaching the fastening equipment under the load by a local horizontal borehole contracting company. Using this special technique, massive steel ropes were threaded under the solid granite stone. Lashing straps finally ensured that all the ropes and chains around the rather misshapen colossus were firmly attached to it. 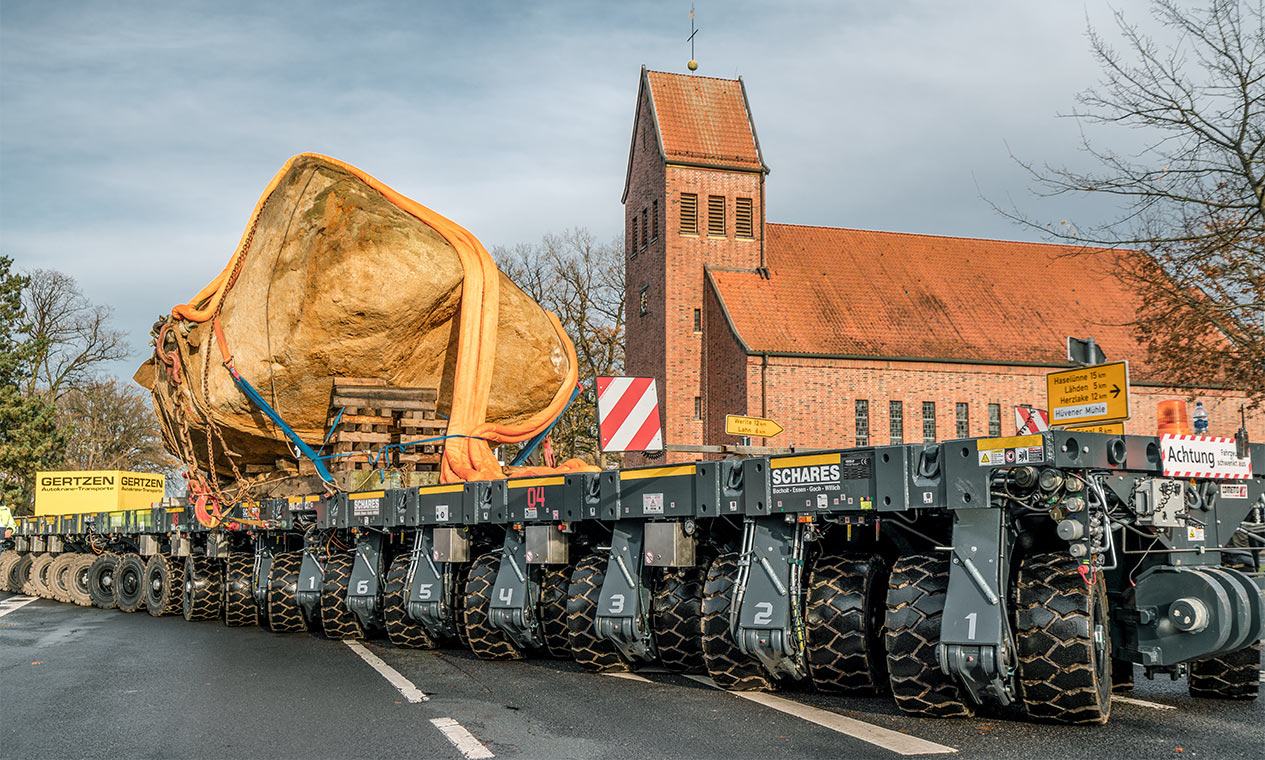 Tricky manoeuvre The 18-axle vehicle had to complete a 90 degree turn on the spot to get around the crossroads in Hüven. The Gertzen team proved to be a well-oiled machine for both hoisting and transporting the heavyweight boulder.

A place on the winners’ podium?

Accompanied by a large showing from the press and a horde of onlookers behind the fence, hoisting the enormous rock the next morning proved to be a fairly exciting venture. However, the nerves at the outset were not due to concerns that the thick lump might be even heavier than the maximum weight for which they had planned. “We are prepared for a load of 148 tonnes”, said Wolfgang Gertzen. “If the boulder weighs more than that, we will have to adjust the crane.” In fact the main question was the position that the Hüven rock would take in the Lower Saxony boulder rankings. The leading boulder was well out in front, weighing in at a massive 330 tonnes. It was close for positions two and three on the state list, both of which weighed in at around 110 tonnes. The secret was not unveiled until the gigantic rock was finally suspended from the hook after being pulled out of the hole in the ground. Dieter Hilgefort immediately reported the net load on his radio from his crane cab: 102.5 tonnes. So it was fourth position for this entrant.

It was then loaded onto three connected SPMTs with a total of 18 axles and lashed firmly to them. Boss Wolfgang Gertzen had also got involved the night before to lend a hand connecting the powerful load carriers. In theory, just one of these three heavy load vehicles would have been sufficient for the forecast weight. However, the maximum axle loads permitted for travelling on the road meant that the additional two units were required. 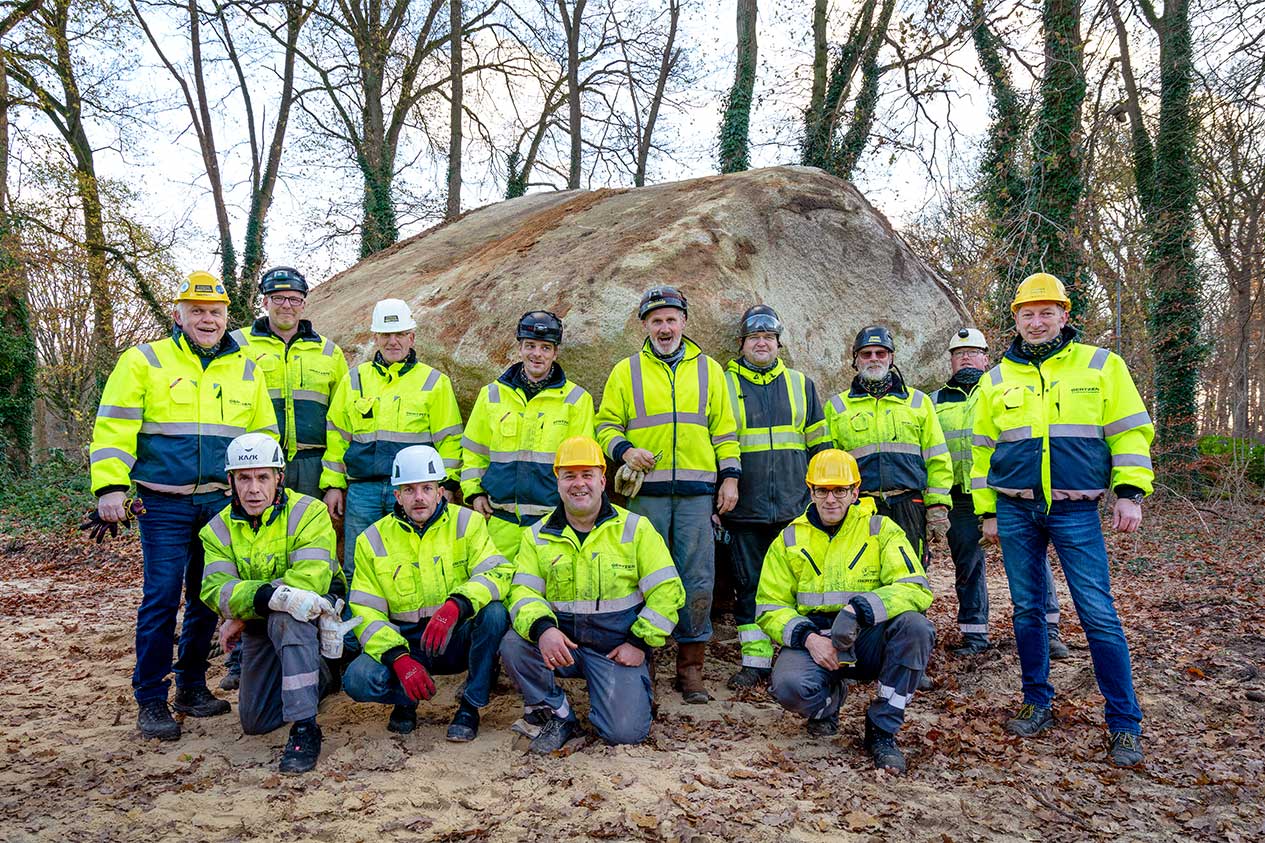 There at last: Wolfgang Gertzen, on the right in the photograph, with his team after the successful completion of the job

The subsequent transport from its original resting place on a temporary road installed over a length of 380 metres on the field and then around three kilometres on the road went like the proverbial clockwork. The professional, precision planning by the Gertzen team paid absolute dividends. The clock on the village church was striking midday as the heavy load finally arrived in Hüven. During its trip through the village, there was still one tricky turn to overcome, however – the vehicle, measuring almost 30 metres in length had to complete a turn through 90 degrees at a crossroads to get around the corner. But Ingo Wiggelinghoff at the remote control for the special transport unit got the whole thing around the corner smoothly in the end. Gertzen’s man for self-driving, electronically controlled heavy haulage transport modules, who was in control of eighteen axles for the first time in his life that day, completed the impressive manoeuvre with flying colours.

Another very impressive point was the short time of only around four hours in which the Liebherr mobile crane was dismantled in the field, moved into the village and then made ready for another hoist. This probably also set a new record. The work to unload and position the boulder at the edge of the village was then completed in an incredible 15 minutes. And after its Sleeping Beauty act for thousands of years, it brought an end to a rather busy day for the Boulder of Hüven.