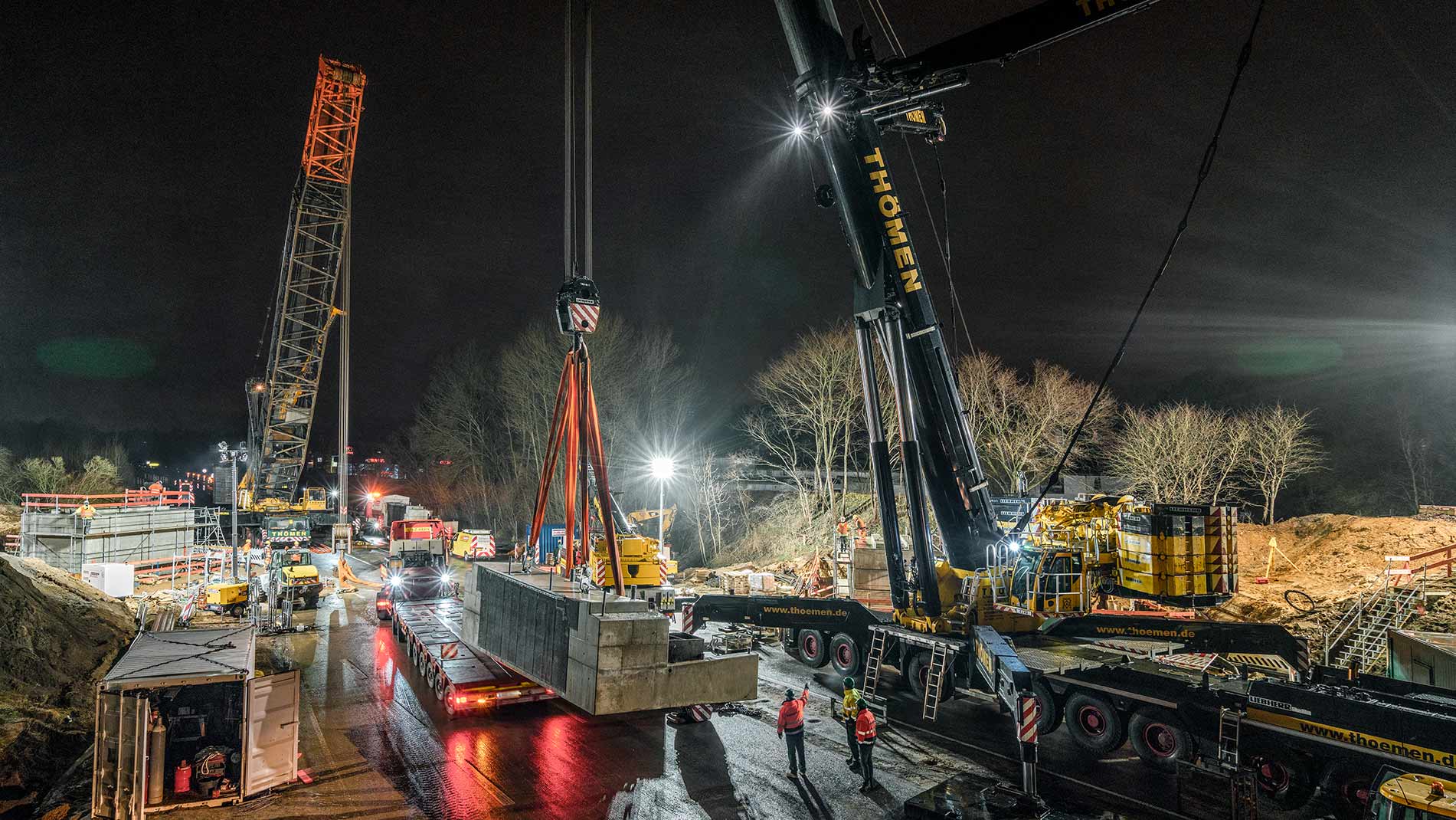 No signs of old age

With a great deal of logistics work and an extremely ambitious timetable, Hamburg-based crane contractor Thömen installed the abutments for a railway bridge near Flensburg in just three days and then installed the new bridge structure on them in a tandem hoist. 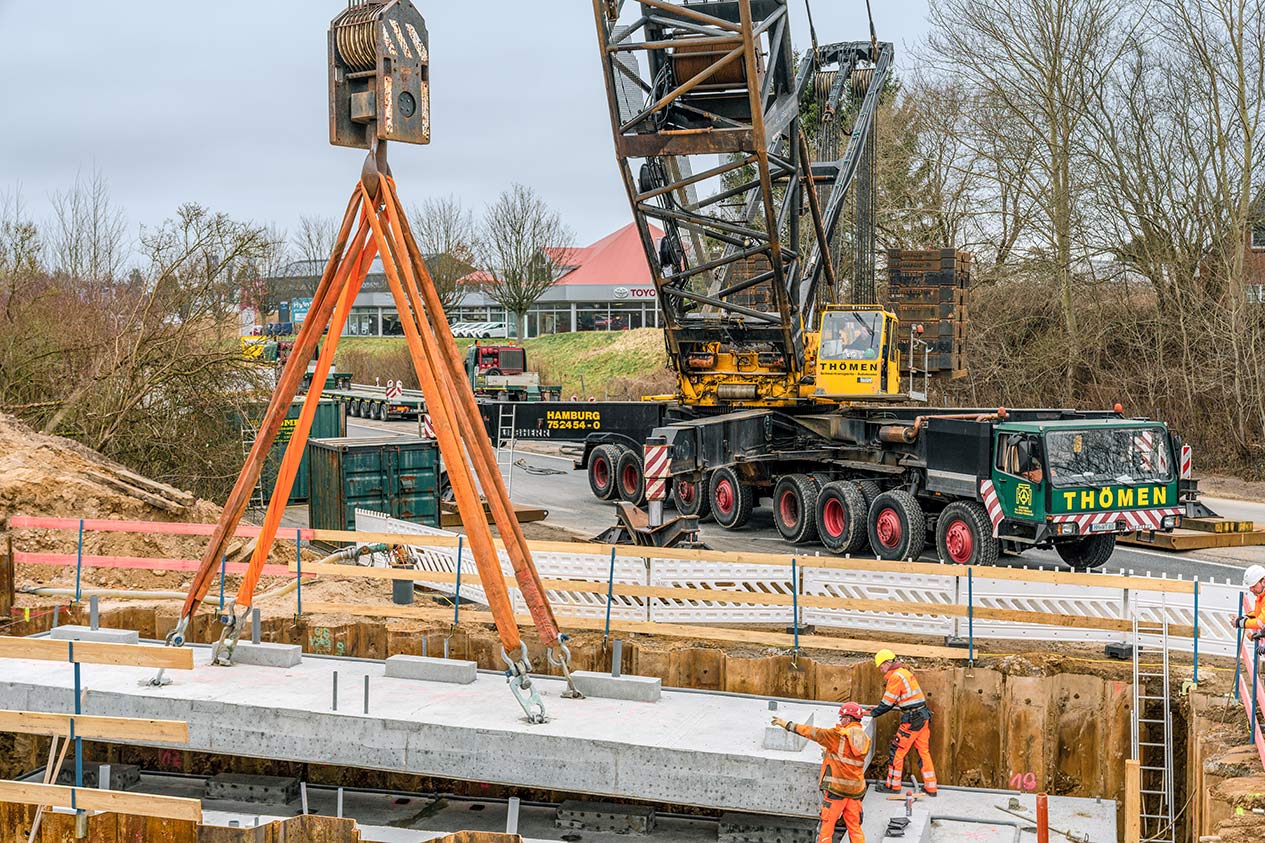 Still going strong: Thömen’s LG 1550 was the third of this crane model to leave our factory in Ehingen. That was in 1992.

The cranes used for the job not only included modern Liebherr cranes such as an LTM 1750-9.1 and a brand new LTM 1110-5.1. Also at the site was a seasoned LG 1550 lattice boom crane, which has been doing sterling service for the Hanseatic crane contractor for almost three decades. And it is still working to their complete satisfaction.

“We really have had our LG for 29 years”, says Marc Bernschneider, Managing Representative at Thömen and Project Manager for Crane Operations at the extremely busy site on the edge of Flensburg. Bernschneider had a mass of men and machines available over the weekend to install a railway bridge. The timetable for the job was extremely tight – which meant that the advance planning for this challenging job had to be correspondingly accurate and extensive. In addition to the two large cranes and two smaller Liebherr mobile cranes for the set-up and assistance work, over a dozen heavy haulage transporters were permanently in action on shuttle runs, delivering the various components, some of which were enormous, in quick succession. 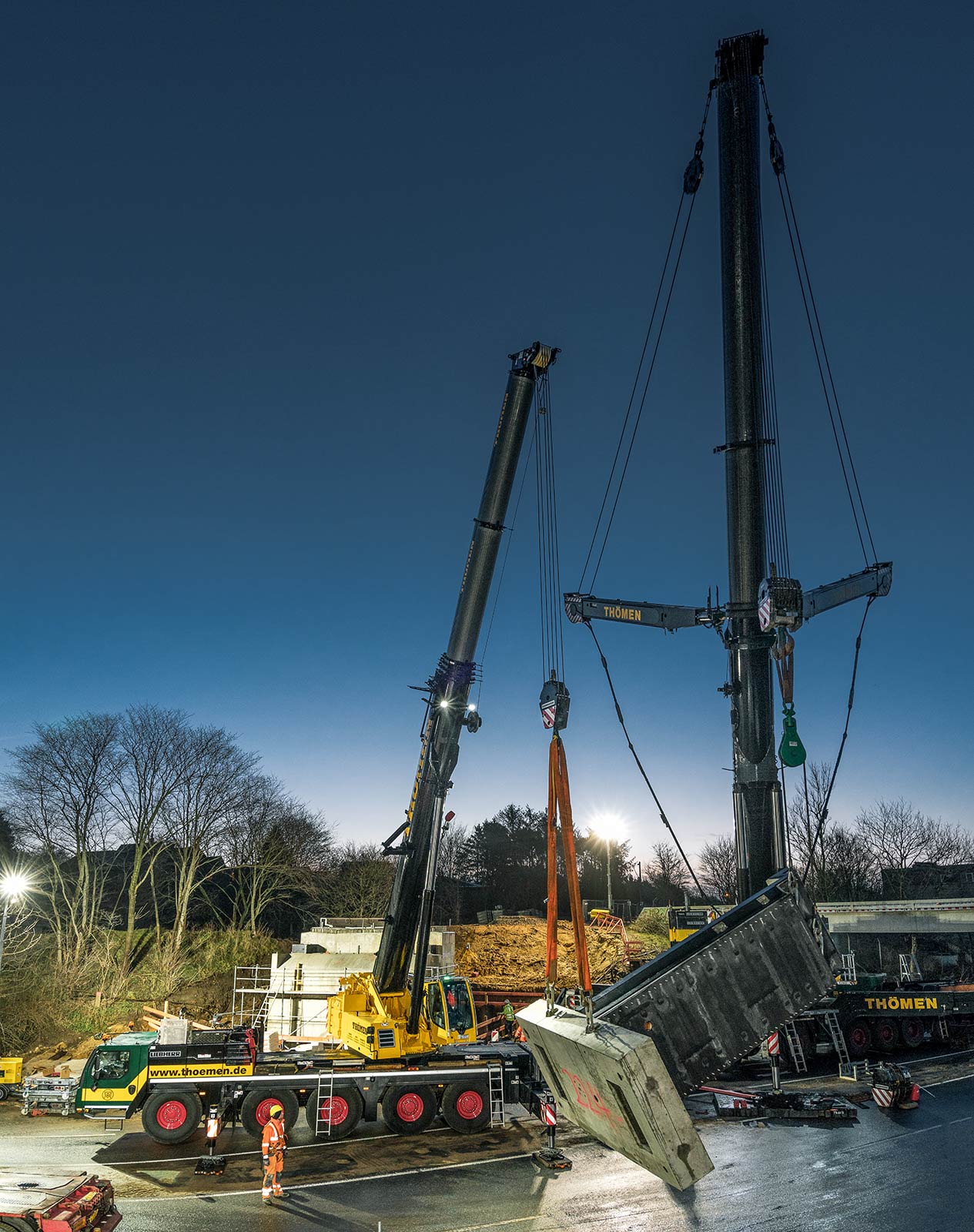 The main reason for the immense time pressure was that the four-lane major road had to be fully closed so that the new trough bridge, weighing 260 tonnes, could be positioned over it. To enable the abutments to be installed as quickly as possible, a type of modular principle was used to enable the prefabricated elements to be stacked next to each other and on top of each other. Almost as soon the two large cranes had been fully set up, ready for action, the heavy haulage transporters started to arrive with the components for the structures. Two low loaders always arrived together at the site so that both the LTM 1750-9.1 and the LG 1550 had a component each for “their” abutment. A total of 42 large reinforced concrete segments weighing up to 92 tonnes had been cast in the weeks leading up to the installation day and stored at a site around 25 kilometres from the bridge. The support of the small mobile cranes was required to erect the side sections for the abutments.

Naturally, however, the main work was carried out by the two large cranes. “We had actually planned to use our two LTM 1750-9.1 cranes for the work”, explained Marc Bernschneider. But one of the powerful mobile cranes had not finished a job at a wind farm promptly and therefore, the oldest member of the 50-crane fleet was dispatched from Hamburg – Thömen’s LG 1550 mobile lattice boom crane. Built in 1992. 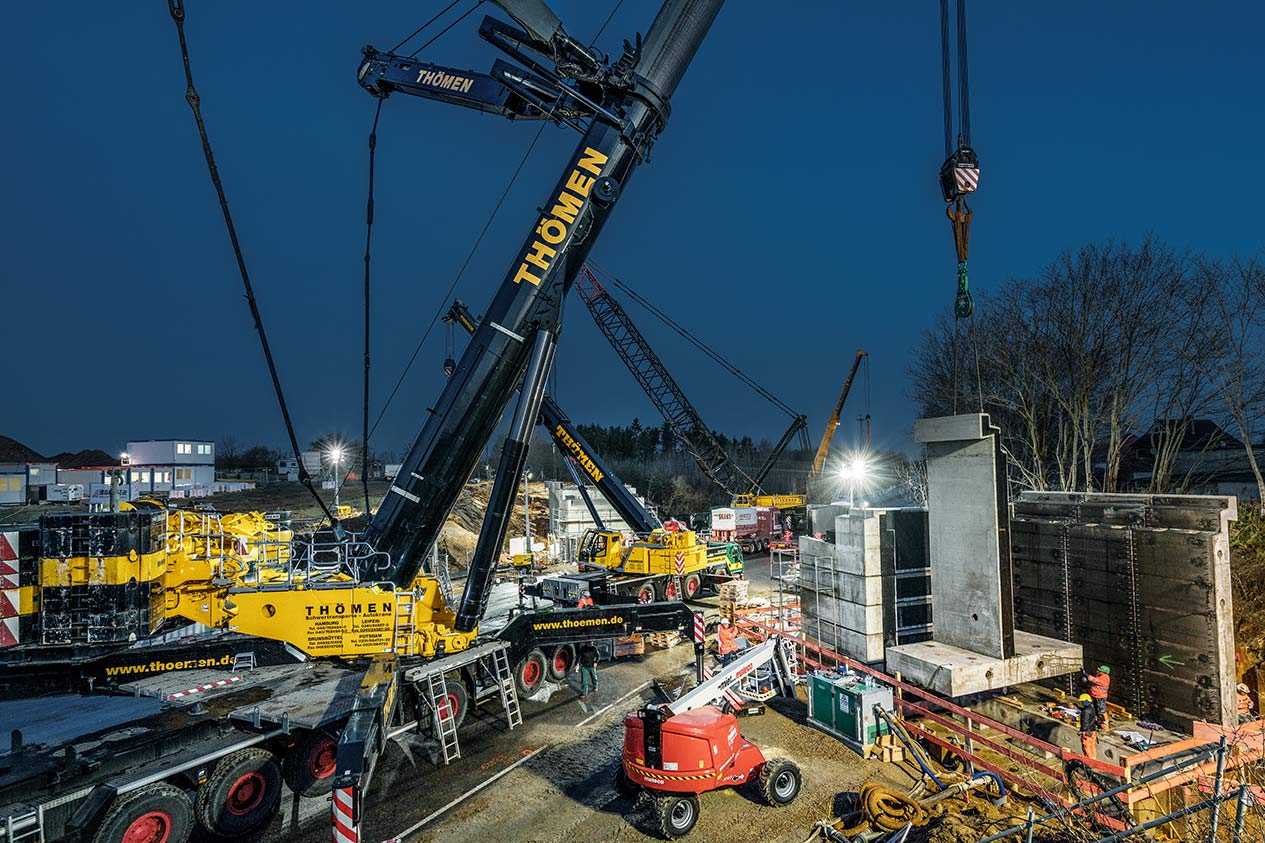 All done: The reinforced steel elements used to assemble the modular abutments weighed up to 92 tonnes. They are shown here on the hook of the LTM 1750-9.1.

Thömen crane and heavy haulage contractors, a familyrun company with a 150-strong workforce now headed by the fourth generation, which will soon be celebrating the 100th anniversary of its first opening for business in Hamburg, was one of the first crane contractors to buy the LG 1550 in 1992. The first two of these machines were supplied to customers in Iran. Thömen’s was the third in the series and was also the first to feature a derrick boom.

The LG 1550 was developed at the end of the 1980s in Ehingen as a lattice boom version on the undercarriage of what was then the LTM 1800. Up to the end of its production in 2009, around 50 LG 1550 cranes were built at the factory. Even today, the concept of a powerful lattice boom crane on a road-going undercarriage is still popular with many users and loyal fans on sites around the world as the successor to the LG 1750 with its lifting capacity of 750 tonnes. 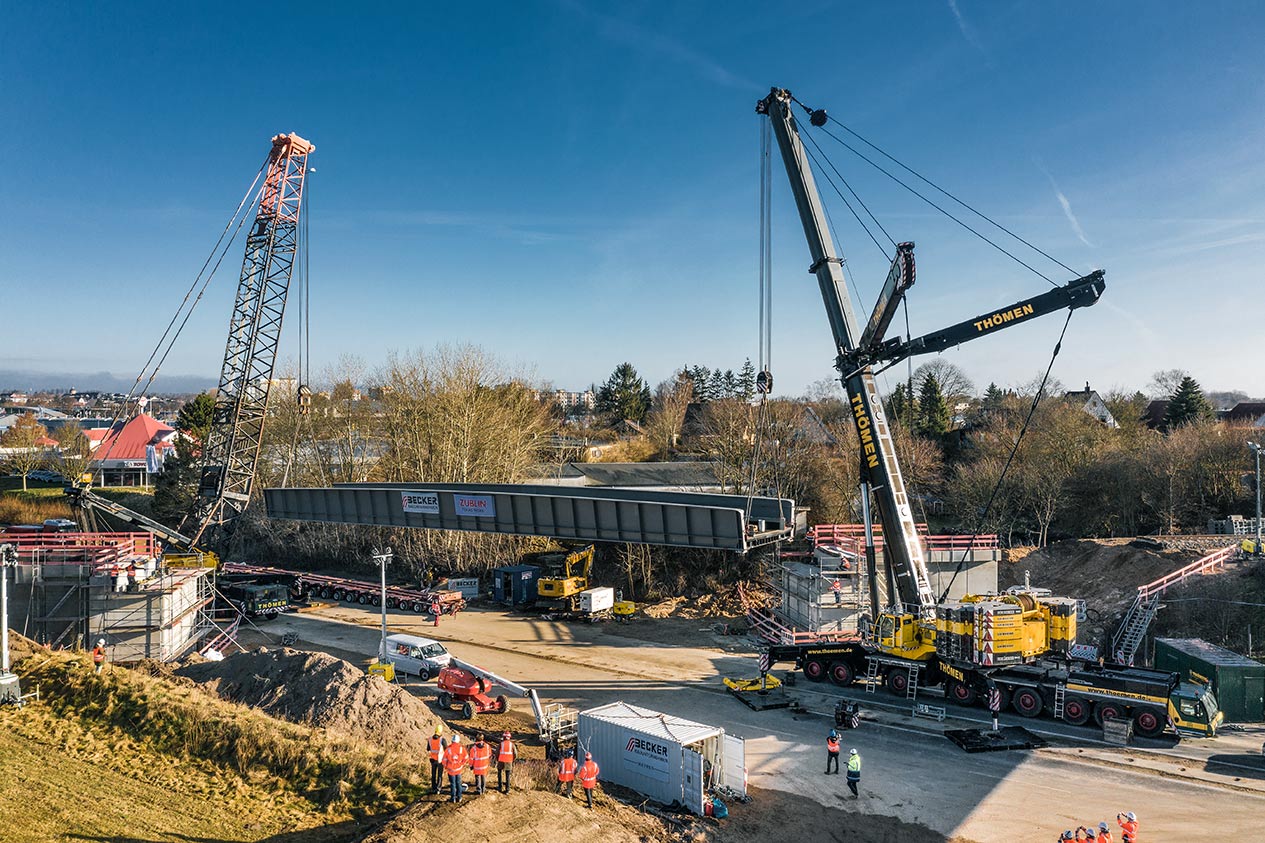 Finale: The two large cranes effortlessly placed the 260 tonne bridge construction on the abutments, which they had installed at record speed beforehand.

Marc Bernschneider, certainly holds his machine in extremely high esteem: “The superstructure of our LG now has over 20,000 hours of service on the clock.” The team at Thömen is still delighted to have access to this all-rounder at all times. The black and yellow vintage machine with its striking green driver’s cab can still be seen just as often at wind farms as on industrial estates and at the ports of northern Germany completing heavy handling work. Or, perhaps, installing bridges like this one in Flensburg. “We have the full set of lattice equipment for the crane in all lengths, including the derrick boom. We also have the heavyweight and lightweight luffing jibs”, says Bernschneider. The Managing Representative’s response to the question as to whether the LG 1550, which is now almost 30 years old, is still performing well, is an emphatic yes. 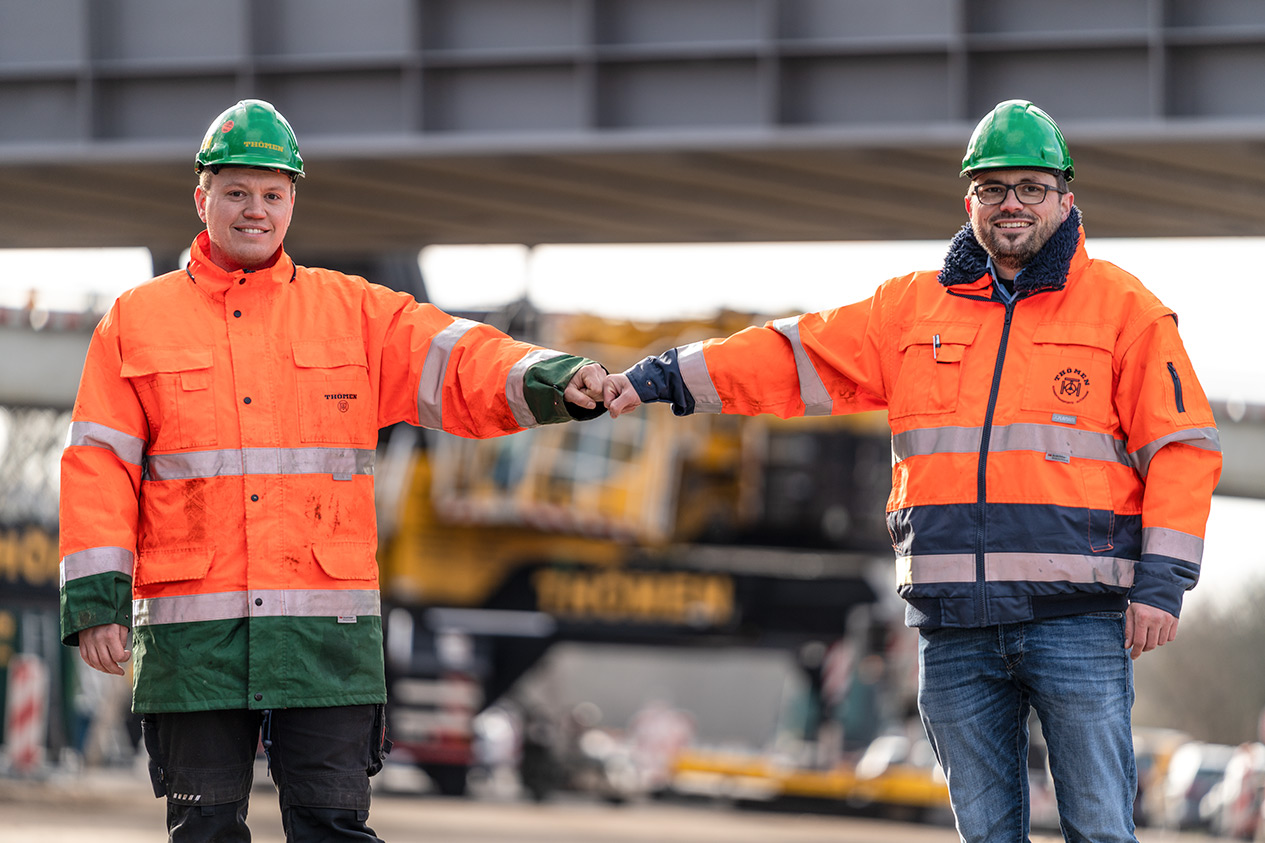 Teamwork: Managing Representative and Project Manager Marc Bernschneider (right) with Marc Kuebart, who was responsible for the CAD project planning for the job.

“For its age, the machine is extremely reliable, but obviously we have to do a few things to keep it fully fit. We can also do a lot of the repairs on the LG ourselves and when necessary we simply get the service team from Liebherr to help us.”

In Flensburg on this rapid-action bridge building operation, at least, the LG 1550 certainly provided an excellent, effortless performance. At the end of the construction work, it completed a tandem hoist with the LTM 1750-9.1 right on schedule to position the 44 metre railway bridge on its abutments. Of course, the 30-strong Thömen team (from the planners to the drivers) also provided an impressive performance at the northern tip of Germany. And the team even managed to significantly undercut the required timetable – the last mobile crane was already on its way back towards Hamburg a full eight hours before the road closure was due to end.