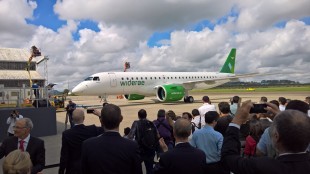 Only 56 months passed between the start of the program and certification. Paulo Cesar de Souza e Silva, Embraer’s President & CEO, expressed his gratitude to everyone involved: “Having had the pleasure of launching the E-Jet’s E2 family back in 2013, it is very emotional for me to see the E190-E2 reach Type Certification today, on schedule and on budget. Our development teams have once again excelled in their creativity, dedication and competence!”

By completing absolutely on schedule all the tests and documentation, the teams from Liebherr-Aerospace in Lindenberg and in Toulouse had laid the necessary foundations for the successful certifications. Liebherr-Aerospace Toulouse SAS supplies the integrated air management system for the Embraer E190-E2, while Liebherr-Aerospace LindenbergGmbH is responsible for the new E-Jet’s advanced full fly-by-wire high lift system as well as the nose wheel steering control module.

Liebherr-Aerospace offers support solutions for its components and systems on board the E-Jet E2 and accompanies the aircraft during their entire life cycle. Liebherr’s international network of maintenance, repair and overhaul stations and spares distribution facilities ensures customer proximity and high-level performance for aircraft operators across the world.