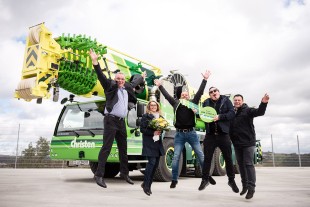 Christian Betschart has been a crane operator at Christen for 10 years and used to drive the Liebherr LTM 1200-5.1 mobile crane. He is looking forward to his new vehicle and said: “Despite the technical progress, all Liebherr mobile cranes are identical to operate. That is extremely good for us operators. And I appreciate the greater safety of the new machine.” In addition to erecting tower cranes, the new crane will also be used in industrial plants and for construction work using prefabricated concrete components and timber joists. Angela Hess-Christen commented: “In the past we have even hoisted aircraft into museums, and as a result of the fact that we are close to several lakes, we often hoist small boats out of the water or into the lake. These will also be tasks for the new LTM 1230-5.1.”

Christen was founded as a construction company in 1952. It quickly forged a business relationship with Liebherr, which was only three years older, initially with its earthmoving machinery and tower crane divisions. Christen then purchased its own mobile cranes starting in 1976. Today, Christen has nine mobile cranes with lifting capacities of up to 400 tonnes. Since 2013 it has been part of Christen Logistik AG, which operates independently under its parent company Christen Holding AG. Its other independent business segments are Christen Gartenbau AG (gardening) and real estate company Christen Immo AG.