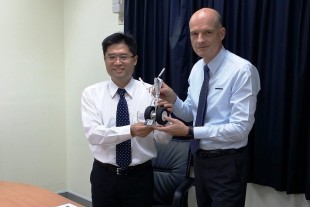 The contract was signed in September 2016 between Liebherr-Singapore (Aerospace Division) and the Taiwanese airline.

With a projected start in November 2016, Liebherr-Aerospace will support the landing gear overhaul program of all six Mandarin Airlines E-Jet190 aircraft and carry out all overhaul activities on the main and nose landing gear system at its facility in Lindenberg (Germany).

Mandarin Airlines is an airline based in Taipei and has been awarded with the IOSA Certificate. The Taiwanese carrier provides domestic and international passenger and cargo service to 31 destinations in East and Southeast Asia, while its parent company China Airlines provides services to the medium and long range international and intercontinental destinations. Charter services are also operated by the company.