Liebherr-Aerospace has been selected by a major automotive manufacturer based in China to develop an electrical turbo-compressor and its power electronics for the next generation of a fuel cell-powered car that can transport up to five persons. This contract and cooperation with the automotive manufacturer represents a significant milestone in Liebherr’s long-term strategy to enlarge its footprint in China. 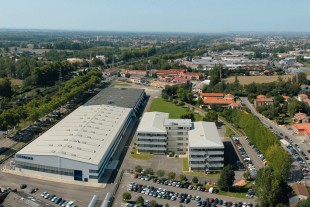 Liebherr-Aerospace was awarded the contract that covers the development and the validation of an electrical turbo-compressor including power electronics, as well as the supply of prototypes.

The selection of Liebherr illustrates the company’s leading edge and experience in electrically-powered turbomachinery for on-board vehicle systems for aerospace, rail vehicles and automotive applications.

For more than one decade, the company has been collaborating with major automotive manufacturers to develop the future generation of fuel cell vehicles. Liebherr-Aerospace’s air bearings technology for centrifugal compressor developed for aerospace activities powered by a high-speed electric motor has been identified as the best candidate to supply compressed and pressurized air to the fuel cell system.

Liebherr’s motorized compressor complies with the severe requirements of fuel cell systems for the automotive industry: very robust and reliable, it does not require oil, it is compact in size, highly efficient, optimized in cost and noise emissions, and it features a fast dynamic response.

This has been demonstrated in the field where more than one hundred vehicles using motorized turbo compressors by Liebherr have run millions of miles without any failure since 2007.

Nicolas Bonleux, Managing Director and Chief Sales Officer at Liebherr-Aerospace & Transportation SAS, commented the cooperation: “This contract is not only an agreement between two parties. It is living proof that we are enabling our customers with our Liebherr technology to produce the next generation of fuel cell powered automobiles in China. Our footprint in China is continuously growing.”

Liebherr-Aerospace & Transportation SAS, Toulouse (France), is one of eleven divisional control companies within the Liebherr Group and coordinates all activities in the aerospace and transportation systems sectors. The division supplies extensive systems and components for manufacturers and operators of aircraft and rail cars. The Liebherr Aerospace and Transportation Systems division has five production sites for aerospace systems in Lindenberg (Germany), Toulouse (France), Guaratinguetá (Brazil), Nizhny Novgorod (Russia) and Changsha (P.R. China). In the area of transportation systems the division operates three production sites in Korneuburg (Austria), Radinovo (Bulgaria) and Zhuji (P.R. China). These production sites are augmented by a worldwide sales and service network. The division employs around 5,400 people.