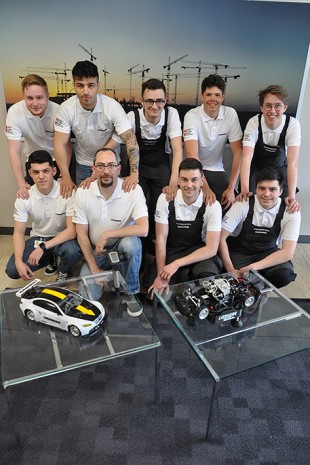 Nine apprentices from Liebherr in Bulle (Switzerland) have won the "Pro" category of the semi-finals of the Horizon Hydrogen Grand Prix (H2GP). For the competition, they developed a hydrogen-powered car that has now left the competition behind in a 6-hour race. With this pole position, the team now heads to the world finals in Assen (Netherlands) from June 2-5.

For the team of Liebherr apprentices the semi-final at the Freiburg Vocational School (EMF) was all about the fascination for technology: "The race was incredible, all the teams were in top form and the atmosphere was great. We felt like we were on a Formula 1 track. Excitement, concentration, team spirit, very good organisation and in the end victory. We were perfectly prepared to make this day a great success." The nine-member interdisciplinary team of polymechanics, automation engineers, computer scientists, logisticians, drafters/designers and commercial employees developed the project together – from the ideation to crossing the finish line. The technical drafters and designers were in charge of the concept and design of the vehicle, while the commercial apprentices took the lead in communications and general administration. The polymechanics were busy machining and assembling the vehicle, while the automation engineers took care of the race car's electronics. The logistics engineers set up a test track and the computer scientists handled the telemetry.

The Horizon Hydrogen Grand Prix (H2GP) is an international competition that gives young people the opportunity to independently develop a hydrogen or fuel cell-powered race car, which then competes against other teams' cars in various stages on the miniature racetrack. By developing these cars, the young engineers also explore technological and environmental issues while working on future-oriented drive solutions.

Liebherr encourages its apprentices to take part in competitions such as the H2GP. In this way, young employees can develop skills that go beyond pure technical knowledge and also develop their organizational skills, strengthen their sense of responsibility and learn to overcome hurdles together.

We wish the H2GP team from Bulle the best of luck for the finals in the Netherlands.