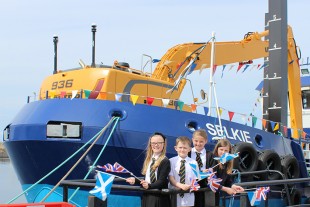 Moray Council, the only authority in Scotland to own a dredger, invited Liebherr-Great Britain to design and supply an excavator for direct mounting on its new £2.5 million dredger, MV (Marine Vessel) Selkie. The R 936 excavator, supplied with marine specification and two excavation buckets, was selected for its ability to fulfil the requirement to dredge up to 8m under water. On the dredger’s first trip out, the R 936 unloaded 260 tonnes from its hull in half an hour.

Liebherr was involved with the project from the ship design stage and worked with Macduff Shipyard’s design team using Liebherr drawings. The brief was for an excavator to be directly mounted on the front of the ship with a support turret that matched the Liebherr swing ring gear, also supplied by Liebherr, and the ability to dredge up to 8m under water. The machine of choice was the 30 tonne class R 936 excavator with a 10.2m mono boom and a 7.7m dipper arm.

The MV Selkie made its inaugural journey from shipyard to sea last month and in its first dredging trip out earlier this month unloaded 260 tonnes from its hull within half an hour. The R 936 benefits from two excavation buckets, a 0.55 m³ digging bucket and a 1.45m³ straight edge bucket for dumping, and is able to switch between them for dredging work making it highly efficient in this type of operation.