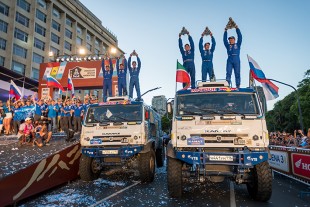 In close cooperation KAMAZ-Master and Liebherr develop and modify drive systems for the KAMAZ trucks participating in the rally in order to prepare them for each race. Since 2014, team trucks are equipped with Liebherr V8 diesel engines with the power output of 686 kW (920 h.p.). This allows the 8,900 kg heavy trucks to reach the limit of 140 km/h (the maximum speed limit at Dakar) and speed up from zero to 100 km/h in less than 10 sec. To reach such an efficiency Liebherr reinforced the engines with specialised fuel equipment of its own production. Partnership with KAMAZ-Master led to mutual development: Liebherr designs engine modifications in accordance with the KAMAZ requirements to secure successful participation in the Dakar rally.