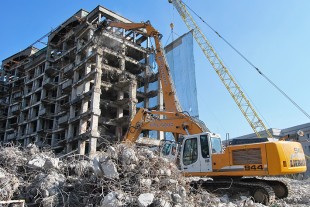 With the construction sector enjoying a period of growth, space in big cities has become a problem. At the same time, alongside extension into the surrounding area, spaces are also created by the demolition of unused buildings. For Apolodor, one of the best-known companies in Romania specialising in demolitions, Liebherr machinery is extremely important.

Building demolition needs to be carried out in conditions of maximum safety both for those carrying out the work and for local residents and passers-by. Demolition companies use two methods to carry out the work: explosives or machinery. While the former has the advantage of speed, it is generally avoided in urban areas, on account of the risk to other buildings in the area, not to mention the noise and the large amount of dust released at one time – which also involves obtaining countless permits.

In urban contexts, beneficiaries frequently opt for the second method, which is safer from every point of view. Apolodor has a separate demolition section set up in 2008 operating on all its building sites country-wide since 1992. Throughout this time, Apolodor has carried out the most important demolition jobs in the country and has used mainly Liebherr machinery, the company’s specialists opting for the German company’s products on account of their track record, as well as their proven flexibility and reliability. Over time, a total of 36 excavators have been purchased.

In the area of Bucharest Airport, two Liebherr excavators have been working on the demolition of a 32 metre high building. Ilie Nedelea, head of the Apolodor Group’s Demolition Section says: ‘I chose Liebherr because they make the best demolition equipment. When you need to demolish very solid structures like this one, you need very powerful machinery. The priority here is not speed in such a big operation so much as the reliability of the machinery, because you can’t take on this level of job with equipment which doesn’t work properly, as every day of delay means penalties which total as much as 5000 euros.’

The equipment operates in daylight at a regular pace and ten hours a day. These are very powerful excavators in the ”High Reach Demolition” category, and with accessories such as claws, sprayers or picks. Over time Apolodor has used a whole range of Liebherr excavators (from the R 904 to R 954). On every occasion, the purchase was made with all features – automatic greasing, protection for the chain track, lifting cylinders and bucket opening/closing or automatic coupling system, which gives a significant reduction in the time needed to change the equipment used.

The R 954 excavator is fitted with hydraulic gauge extension system as an optional extra, (fixed chassis as a standard, and adjustable mechanical intermediary chassis) which guarantees an excellent compromise between mobility in transportation and stability on site. The operator works in a comfortable cab, well soundproofed and with excellent peripheral vision.

Working conditions are not exactly easy, requiring equipment with a high working hydraulic pressure. For the demolition of the old structure in Bucharest Airport two excavators were used – initially with an R 954 for the highest areas (15-28 metres), followed by an R 944 for the demolition of the lower floors up to platform level. The former, equipped with a 2.5 tonne claw, and the latter with one of 3.3 tonnes.

The building, whose construction was halted in 1989, has eight levels plus a terrace, reaching a total height of ten storeys. The height of the structure was 32 metres, whereas the R 954 excavator which was used has a working height of 28 metres, which is why a platform was set up at the working height.