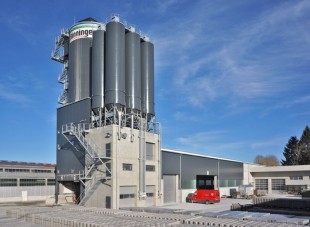 After 42 years of flawless operation, Hans Rinninger & Sohn GmbH & Co. KG in Kißlegg (Germany) have opted to replace their existing Liebherr mixing plant with the incorporation of a new Liebherr mixing tower Betomat IV-515 in their factory producing prefabricated elements and concrete goods.

Featuring a capacity of up to 515 m³ of aggregates in ten silo chambers, the new mixing tower conveys material of up to 32 mm grain size via galvanised belt-driven bucket elevator with a delivery rate of 140 m³/h. In addition, the plant also includes six cement silos each with a holding capacity of 100 t.

A flexible mixing plant is essential for Rinninger in order that the company can provide custom-made solutions as an immediate response to market requirements. The new Liebherr mixing plant is therefore equipped with two weighers respectively for the weighing of aggregates, cement, water and admixtures, as well as featuring a pigment weigher. Discharge of the concrete is accomplished by two mixers, either directly into truck mixers or into the affiliated bucket transport system for the production of prefabricated concrete elements.

Rinninger also employ a residual concrete recycling plant LRS 806 featuring an output of 12 m³ per hour, whereby material recovered from cleaning of the mixing plants and truck mixers, as well as quantities of unused residual concrete is prepared once again for use. The constituents of the reconditioned material are washed in a closed material circuit. An additional hydrocyclone cleans the residual water of fines before supplying the purified water back into production. This practice of processing and recycling the water yields not only considerable savings in costs and materials but also helps the environment.