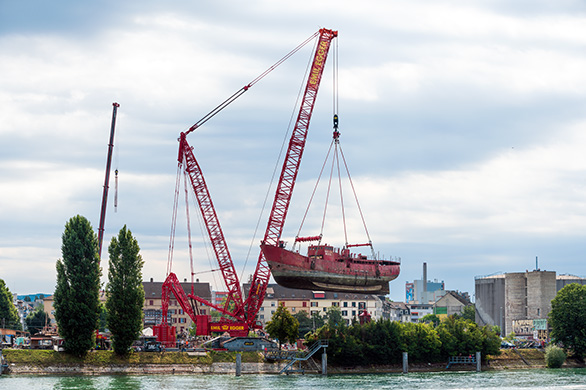 According to the International Monetary Fund, global economic growth slowed by 3.0 % in 2019, reaching its lowest point since the 2008–2009 financial crisis. Industrial countries experienced 1.7 % growth, slightly below the level from the year before. Growth among emerging and developing economies topped out at 3.9 % for the year, representing a slight slow-down compared to 2018. The US economy grew by 2.4 %, which was also weaker than in the previous year. The downturn extended to the eurozone as well, where growth of 1.2 % also fell short of the previous year’s level. The World Trade Organisation also reported a significant decline in international trade. The main causes behind these unfavourable developments have been geopolitical tensions, including the Brexit negotiations and the ongoing trade conflict between the US and China.

Despite political instabilities and the general decline in economic growth, the Liebherr Group managed to break its own sales record for the third year in a row. Growth was evenly distributed among the Construction Machines and Mining divisions, along with the other product areas. The Group’s sales in construction and mining machinery reached € 7,645 million, an € 812 million (11.9 %) increase compared to the year before. This included the Earthmoving, Mobile Cranes, Tower Cranes and Mining divisions. For the other product areas, including the Maritime Cranes, Aerospace and Transportation Systems, Gear Technology and Automation Systems, Domestic Appliances as well as the Components and Hotels divisions, combined sales reached € 4,104 million, a € 387 million (10.4 %) increase over the year before.

The Group owes its success last year to an increase in sales in almost all regions. Within the European Union, traditionally the Group’s strongest market, sales rose once again. This is especially due to favourable growth in Germany and France, as well as in other countries including Spain and Denmark. There was also a significant increase in sales in other European countries, driven in part by strong growth in Russia and Norway. The most significant gains were in North America, where sales rose in the US as well as Canada. There were similar positive developments in Asia and Oceania. Performance was especially bolstered by strong growth in Australia, China, Singapore and Japan. Although not as strong as in other regions, there was still growth in Africa and the Near and Middle East. This is offset by slight declines in Central and South America.

Net result for the year

For 2019, the Liebherr Group reported a net profit of € 429 million, an increase over the year before. The operating result fell slightly compared to 2018. However, financial results for the year were very positive.

The qualifications, enthusiasm and commitment of the Group‘s employees make a key contribution to its business success. Liebherr’s long-term commitment to its employees is in keeping with its tradition as a family-owned company.

At the end of 2019, the Group employed 48,049 people worldwide. This represents an increase of 1,880 (4.1 %) compared to the year before. The number of employees significantly increased in Europe and North America. The Group also hired many new employees in Central and South America, Asia and Oceania, and Africa and the Near and Middle East.

To compete for talent, Liebherr took further measures to enhance its employer branding. This was the goal of an image campaign in Austria, which will serve as a template for similar campaigns in other countries with a significant shortage of skilled workers on the job market. Meanwhile, Liebherr also used its social media presence to promote its image as an attractive employer.

The Group aspires to generate sustainable value for its employees, customers and suppliers and for society as a whole. As an independent family company with a long-term focus, Liebherr is aware of its responsibilities and is committed to sustainable development. Its products, processes and infrastructure are geared to the minimum possible consumption of resources. The focus in all areas is on safety, efficiency and environmental sustainability. Last year, a large number of the Group’s companies worked on projects looking at social, environmental and economic aspects of sustainability. 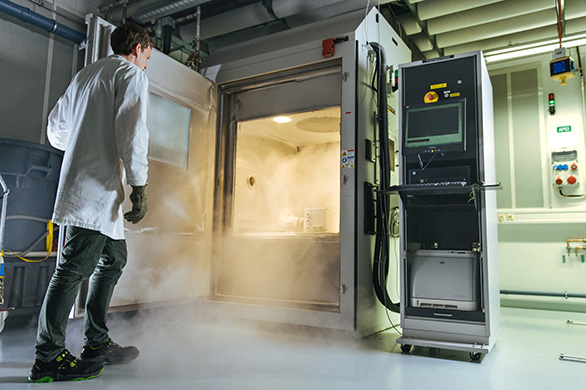 As a high-tech company, Liebherr pursues the goal of making a decisive contribution to shaping technological progress in sectors relevant to the Group. Liebherr invested € 592 million in research and development last year. The bulk of this was used in the development of new products. A large number of joint research projects with universities, other higher education institutions and research institutes were initiated and continued.

Electrification was an overarching topic in 2019. As part of the EU’s “Clean Sky 2/Horizon 2020” technology initiative, Liebherr conducted research on topics such as electric aircraft propulsion systems, as well as landing gear and air management systems designed to make aviation more efficient and environmentally friendly in the future.

Liebherr also worked intensively on alternative drivetrain technologies for its construction and mining machines. These came to life at the Bauma 2019 trade fair, where the Group introduced new products including the fully electric R 9200 E mining excavator and the diesel-electric T 236 mining truck. Liebherr reached a key milestone on the path towards the emissions-free construction site in 2019 on one of the largest roadworks sites in Western Austria. Here, the LB 16 unplugged made its debut. It is the world’s first battery-powered heavy-duty drilling rig.

Meanwhile, digitalisation, safety and the automation of machines were other important research topics. Amongst others, the Group developed assistance systems that support the safe operation of construction machines. Condition monitoring, which enables oversight of individual components in complex machines and systems, is another example of the efforts to make digital transformation a reality. Liebherr also joined the Hydrogen Council, a global initiative of leading energy, transport and industry companies with a united vision and long-term ambition for hydrogen to foster the energy transition.

Investments € m
** of which, rental fleet

The Group has traditionally emphasised the importance of making regular investments in its production facilities and its global distribution and service networks. Last year, the Group invested € 756 million, a decrease of 8.8 % or € 73 million compared to last year. Offset against this was depreciation of € 541 million.

One focus of investment in the year under review was the expansion and modernization of company locations and the intensification of our global market presence. The Concrete Technology division opened the doors of its new production site in Bulgaria. Meanwhile, the Aerospace and Transportation Systems division invested in new facilities in Friedrichshafen (Germany); Toulouse (France), Singapore and Bulgaria. Extensive investment was channelled towards operations in Germany, including a new sales and service centre at the Port of Hamburg. The Domestic Appliance division opened a new customer centre at its site in Ochsenhausen (Germany). Now, visitors from all over the world can experience the latest ranges of refrigerators and freezers.

Depreciation € m
** of which, rental fleet

Technical refurbishment work was carried out at the machine tools and Automation Systems site in Kempten (Germany). The Maritime Cranes division saw the installation of the TCC 78000, one of the world’s most powerful heavy-duty, rail-mounted cranes, at the Port of Rostock. This crane will assist with the construction of the HLC 295000 offshore crane, the most powerful crane Liebherr has ever built.

There were also numerous investments in the Group’s global market presence. These include the foundation of the new Liebherr Transportation Systems Company in China, the opening of a new Liebherr Gear Technology production site in Yongchuan (China) and a joint venture between the Liebherr Components division and the Shanghai Diesel Engine Co., Ltd., a subsidiary of China’s largest manufacturer of vehicles and components.

By taking over all the branches (along with the personnel) of a key dealership in New Zealand and Australia, Liebherr expects to bolster its tower cranes sales in these two countries and improve its customer service there. 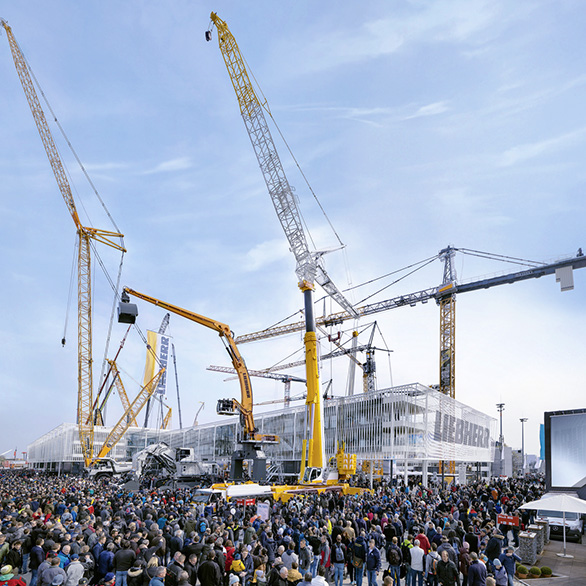 In order to ensure the sustainable success of the Group, opportunities and risks are identified at an early stage to be evaluated and controlled. The Group has a continually optimised risk management procedure in place, and an internal control system to help it meet operational, market-related and legal requirements. To ensure the integrated recording, analysis and evaluation of risks, all managers responsible for the risk management and internal control systems used in the individual Group companies are involved. Risks are identified and assessed locally in the individual companies, then countermeasures to limit the risks are introduced and the impacts are evaluated.

This localised approach also makes it possible to identify and assess areas of opportunity efficiently. The information gained about market-related and technological developments is used in opportunities management to reach decisions about future areas of business and production processes. At the corporate level, the current risk situation is regularly reviewed and the effectiveness of the systems and processes used is assessed. The internal audit department monitors compliance with Group guidelines and the implementation of the risk management and internal control systems.

The Group's order situation at the end of 2019 as well as far into the first quarter of 2020 can be described as very good. The due to the impact of the Corona virus significantly restricted business activities in many markets will obviously influence the turnover in 2020. The extent to which our business will be impacted cannot be forecasted reliably at the time this annual report is compiled. However, the Liebherr Group will ensure that all organizational units have implemented the necessary measures to guarantee that customer demands are met with the usual reliability, also in 2020 and beyond. The financial strength of the Liebherr Group enables a rapid resumption of reduced activities in production, sales and service units.

Dr. h.c. Isolde Liebherr, Dr. h.c. Willi Liebherr, Stéfanie Wohlfarth and Jan Liebherr look back on a successful year. The family members of the Liebherr administrative board give their insights into the Liebherr Group’s performance, key milestones and the challenges that lie ahead.

Complex data calculations, digital simulations and hundreds of hours driving and digging on challenging test sites a lot of work goes into perfecting the next generation of Liebherr earthmoving and material handling machines.