What do you want to be when you grow up?

Aaron and Andrew Cromarty from Canada were asked this question a lot when they were younger. Back then, they didn’t know they would both end up in the same field of work one day. Two different careers, one joint passion.

Has the younger brother followed in his older sibling’s footsteps? Not quite, but the two stories certainly have a lot in common.

15 years ago, Aaron began to discover his passion for cranes as an apprentice carpenter at Cambie Forming Ltd. in Vancouver, Canada. Since then, he has qualified as a certified Red Seal crane operator as part of the Red Seal training program. This endorsement certifies that Aaron is qualified to work throughout Canada as a professional crane operator. Aaron is currently the equipment manager for a fleet of nine (the 10th is on its way) Liebherr top-slewing cranes at Cambie Forming Ltd., which includes two recently added 280 HC-L cranes. The two newcomers have already impressed Aaron with their ease of assembly, maintenance, operation and overall jobsite performance: “It’s always exciting to assemble a new crane on the construction site for the first time and see it working successfully. And HC-L cranes are simply the best among tower cranes.” 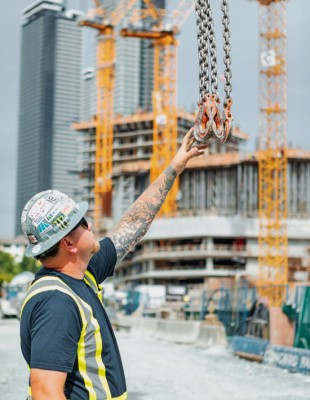 Last year at Bauma, Aaron had the chance to meet several Liebherr team members from Germany and the US. He values his work with the Liebherr team, “I have been working with them for a couple years now and have nothing but good things to say about their promptness, professionalism and work ethic.”

Andrew, his younger brother, began his career as an industrial electrician. A friend of the Cromarty family happened to be working locally in Kamloops as a tower crane operator and offered him a construction site job as a material handler around a year ago. Andrew accepted the offer and is currently working as a tower crane rigger in Kamloops. Describing his career so far, Andrew says, “My passion for tower cranes has grown immensely over the past year!” What he loves about his job is that he can handle several lifts safely and efficiently within a day’s work, meaning that he is actively involved in projects every day. The 357 HC-L luffing jib crane is his dream machine, as he sees it as being “the best-looking and most sophisticated tower crane around”. His conclusion about the HC-L giants: “Very diverse and they store some of the best technology in the crane world as of yet.” 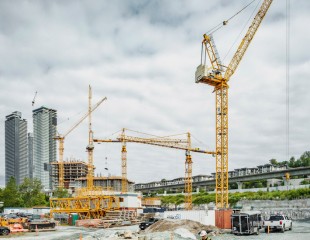 The brothers haven’t yet worked together on the same construction site. But it could well happen one day.

They got a taster of this when the pair were reunited for our Liftinghero interview. The brothers met in Burnaby at Aaron’s current building project: four 50-storey apartment blocks where both 280 HC-L and a 355 HC-L are in operation. At any rate, Aaron was able to show his little brother breathtaking views from the 357 HC-L’s predecessor.

We’ll keep you updated should Aaron and Andrew actually end up working on a construction site together in the future. Until then, we wish both of them many more exciting and challenging assignments in Canada. 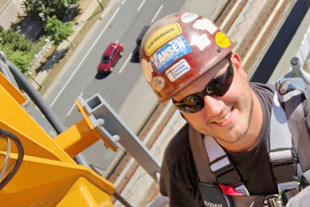 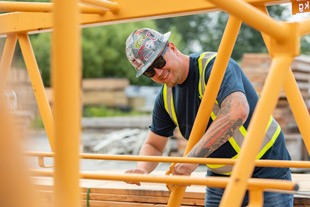 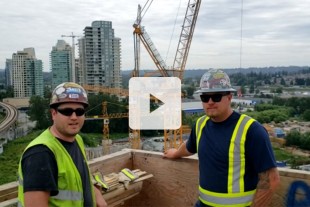