Schussmann Kranservice GmbH has taken delivery of a new LTM 1230-5.1 at the Liebherr Plant in Ehingen. For the Liebherr construction crane rental contractor based in Upper Bavaria, the 230 tonne crane with its 75 metre telescopic boom is the perfect crane for assembling and dismantling its tower cranes. In addition to the length of the telescopic boom, the VarioBase® variable support base and VarioBallast® adjustable ballast radius were important criteria behind the decision. 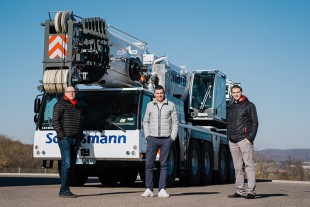 Schussmann has expanded its fleet of mobile cranes in the 5-axle class by taking delivery of its new Liebherr LTM 1230-5.1 mobile crane. The very long 75 metre telescopic boom on the LTM 1230-5.1 was a major criterion behind the purchase decision. Company owner Michael Schussmann explains: “Long telescopic booms are enormously important for assembling construction cranes. That is why the LTM 1230-5.1 is the perfect crane for us as a construction crane rental contractor. As things are often constricted on construction sites, VarioBase® and VarioBallast® were also major plus points in deciding to select Liebherr. And finally, the crane also delivers good value for money”.

The largest mobile crane at the company is an LTM 1450-8.1. Schussmann mainly uses its mobile cranes to assemble and dismantle its own fleet of construction cranes, which consists exclusively of Liebherr bottom and top-slewing cranes. In addition, the company also takes on the assembly of third-party tower cranes and other lifting or assembly work.

Schussmann Kranservice GmbH was founded in 2008 and its initial business was the rental of bottom-slewing cranes. Top-slewing cranes were added in 2012 and the company purchased its first mobile crane in 2015. Schussmann now has a 35-strong workforce and also rents truck loading cranes and provides transport services of all kinds.

Its construction crane fleet consists entirely of Liebherr machines, whilst the vast majority of its mobile cranes also bears the Liebherr logo. “Over the years we have come to appreciate the high quality and reliability of Liebherr products. With this in mind, we also intend to expand our fleet of mobile cranes in the future with Liebherr models. We are building on the fact that we have such close contact with the Liebherr team and that they will continue to support us with advice and action”, reports Michael Schussmann.