At the Bauma 2016, with the D96XX and D98XX Liebherr presents its two new V-diesel-engine product lines. Also on display is the new G946 λ1 mobile gas engine, which has been developed especially for agricultural and forestry applications, but also for the construction industry, industrial and transport applications. Other innovative products on display include the SCRFilter for the D93X, D94X and D95XX engine models. 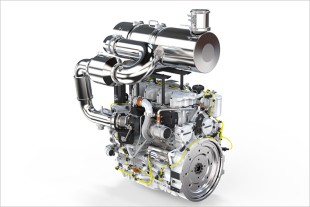 With its D96XX and D98XX engine series, Liebherr is launching two new diesel model lines in the upper power-output category from 700 kW to 4,500kW. The first of the D96 series is a V20 engine rated at up to 1,500kW power output at a speed of 1,900rpm. The cylinder banks are arranged in an angle of 108° and the firing order was chosen to minimise the need for rotary vibration damping. These product features allow low-vibration engine operation, which is a further advantage for customers. The new Liebherr engines comply with the EPA CARB Tier 4 final exhaust emission limits and can be equipped with the SCR exhaust gas aftertreatment system. It is a Liebherr in-house development, like the new common rail 11.2 fuel injection system, which permits multiple fuel injection at a pressure of 2,200 bar. On the basis of the diesel engine D9620 Liebherr is developing a gas engine for stationary applications with a power output of 1,070kW and thus extends its gas engine portfolio. The production of the gas engines will start at the end of 2017.

With a specific power output of up to 43.5kW per litre, the D98 series engines have the highest power density available in this market segment. All the principal components such as the injectors, the high-pressure injection pump and the intelligent engine control unit are rated for high efficiency and maximum fuel economy. The D98 series will be available in three different cylinder layouts: the V12 is the first to appear, and will be followed within a short time by a V16 and a V20 cylinder configuration. All the components of these engines are scaled to ensure that the appropriate performance values are achieved. This modular designed engine allows to reduce the spare parts diversity and offers more flexibility. Thanks to an SCR system available in addition to the standard specification, both the D98 and the D96 series comply with the Tier 4 final exhaust emission limits. Production of these new engine generations will start at the end of 2016 in Colmar (France) and in Bulle (Switzerland); successful field tests are already being held. 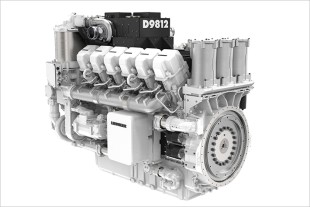 One further innovation by Liebherr at the Bauma 2016 is the G946 λ1 mobile gas engine. It links low-emission gas fuel technology with the well-proven features of diesel engines by Liebherr. The team of developers at Liebherr relied hereby on more than 30 years of experience and know-how in the development of diesel engines and stationary gas-fuelled power units. The rated power output of the new gas engine G946 λ1 is 330kW at 2,000rpm. It has been developed for use in construction machinery, in agriculture and forestry, as motive power for rails and for other industrial applications.

As modular component system, the new exhaust gas aftertreatment of Liebherr, the SCRFilter, is available for all engine series. Its compact dimensions are obtained by combining a DOC catalytic converter, an SCR-coated particulate filter and an SCR catalytic converter. Passive regeneration ensures reliability and lengthy operating life: maintenance is not needed until after the first 4,500 operating hours.