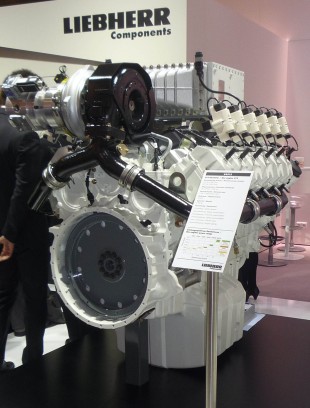 At the EnergyDecentral 2014 Liebherr-Component Technologies AG will be presenting its further developed and completely equipped gas engines. Apart from the base version engines offered until now, Liebherr now offers a complete package from one source. This encompasses a fully operational engine including sensors, ignition system, knock control as well as safety functions and an engine management system. Customers who integrate Liebherr’s complete engines in combined heat and power units can therefore be offered a “Plug&Play” solution. Owing to the well-balanced periphery and components, the new engines ensure a high degree of operating reliability and performance proficiency. With a mechanical efficiency of 41.5%, Liebherr’s gas engines offer an attractive alternative to competitors’ products.

In hall 22 at booth D22, a 6-cylinder inline engine and a 12-cylinder V-engine represent the engine program with a range from 145 kW to 516 kW rated power (mech.). Both exhibits are fully equipped engines, with the peripheral control units shown on the 12-cylinder engine.

Additionally, visitors will be provided with information at the Liebherr booth on after-sales services. These include for example worldwide commissioning of the products, spare part kits and professional trainings as well as remanufacturing of engines.