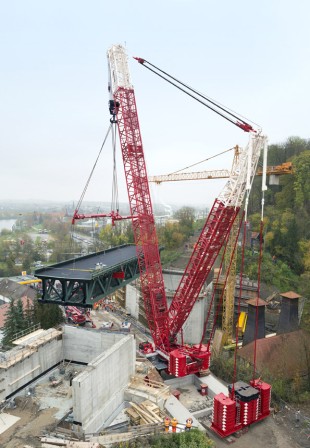 The expansion of the municipal railway around Heilbronn was what made the construction of a new railway bridge in Bad Wimpfen necessary. However, there was very little space on the precipitous site for the crawler crane to hoist the 355-tonne steel bridge and to deliver the component. Proposals for using two cranes to position the bridge were rejected. For this solution the enormous truss construction would have had to be stored between the cranes for the duration of the set-up work. However, as the Deutsche Bahn project was already running behind, the whole thing had to be handled very quickly.

The Riga-Mainz team set up the Liebherr crawler crane on two massive reinforced concrete ramps. Company boss Uwe Langer, who was also responsible for planning the foundation, had a dozen piles driven into the site for this purpose down to a depth of up to 13 metres. After all, the ramp had to withstand a calculated crawler pressure of 507 kilonewton per square metre. 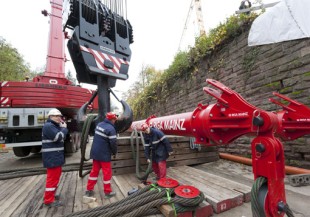 This was one of the smart ideas that led to Riga-Mainz being awarded the order for the work. "Riga was the only supplier to offer a solution using just one crane", explained Kathrin Gottschang from the project management team at DB Projektbau GmbH, "the concept suggested by Uwe Langer was also the only one that included threaded the cross beam through the bridge trusses." All the other suppliers would have fastened the crane at the top of the structure. That would have meant, however, that much of the work on the bridge could not have been carried out in advance of the hoisting work. "If we had had a bad winter, we would have fallen even further behind", says Gottschang. "But this meant that we reduced the winter risk to almost zero." 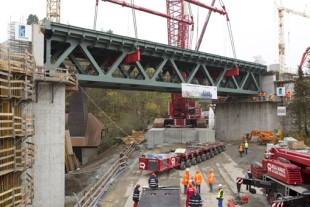 With the cross beam and attachment equipment the LR 1600/2 hoisted a total of 402 tonnes. The crawler crane was fitted with a total of 565 tonnes of ballast for the hoist. Slowly the crawlers reversed around ten metres until finally the bridge was positioned with pinpoint accuracy on the new abutments. Two other Liebherr cranes, an LTM 1200-5.1 and an LTF 1045-4.1, were used for set-up and support work.