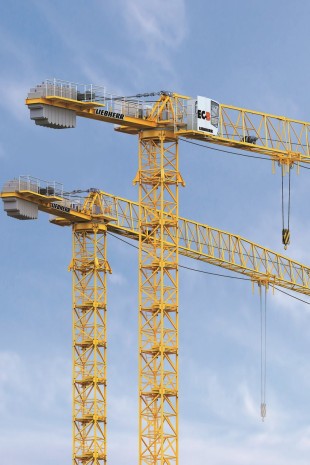 The expansion of the site area to 265,000m² and the construction of a new terminal will make the airport in Santiago de Chile one of the main hubs in South America. When it is completed the airport will almost double its overall capacity to 30 million passengers per year. The number of passenger boarding bridges will rise from 18 to 67. In addition the number of parking places will more than double. The project is being constructed using 23 Liebherr EC-B series tower cranes – eight 250 EC-B 12 Litronic cranes, six 150 EC-B 8 models and nine 110 EC-B 6 machines. These Flat-Top cranes will operate with jib lengths of 45 to 60m and hook heights of 17 to 45m.

Since October 2015 there have been several rounds of negotiation with the consortium specially formed for the project by construction contractors Vinci and Astaldi and the contract was finally signed in mid-September. The main reason for the customer choosing Liebherr was the fact that the company has an office in Santiago. The contract was signed together with the dealer Maquinarias Cruz del Sur. In addition to the 110 EC-B 6 from its fleet, the dealer is also providing the customer with assembly and service work as well as crane drivers for all the cranes – a genuine all-round package.