Revenue generated by Liebherr’s Material Handling Technology product segment amounted to € 477 million in 2020, representing a € 152 million or 24.2 % decrease compared with the previous year. 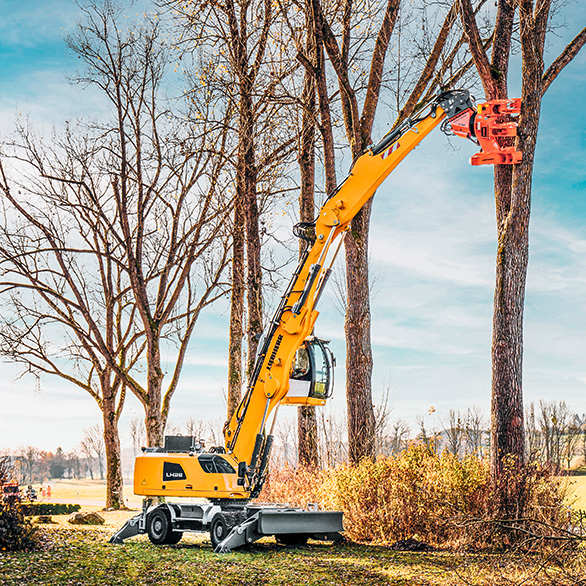 Decline in sales in key markets

A downturn in the global material handling technology market was already evident at the beginning of 2020. However, the situation was further exacerbated by the coronavirus pandemic and its negative impact on the global commodities sector. The material handling market collapsed by as much as 50 % in some key regions and countries such as Western Europe, North America and Russia.

The effects of this were also felt at Liebherr. Sales were down in the European Union, primarily in Finland, Spain and Germany, although Austria posted an increase. In non-EU countries, sales growth was favourable in Turkey and Norway, but there was a decline in sales in Russia and Switzerland. The North America region was also affected, with the USA showing a significant drop in revenue and Canada reporting a moderate decline. At the same time, the results from Asia and Oceania were very positive, with growth recorded in Australia, Indonesia and Japan. The product segment also performed well in Central and South America, driven primarily by growth in Brazil.

Numerous machines were converted to comply with the EU’s Stage V emissions regulation, and the availability of electric drive concepts was further expanded.

The year 2020 was characterised by product innovation in the Material Handling Technology product segment. This included the world premiere of Liebherr’s new mid-range wheel loaders. The L 526, L 538 and L 546 all-round wheel loaders can now be fitted with the “parallel kinematics” industrial lift arm variants, which boast very high holding forces in the upper areas as well as parallel guidance. For the material handling machines LH 22 to LH 35 Industry Litronic, new equipment combinations were developed to provide even greater ranges when performing tasks in the arboricultural and timber industries.

The existing product portfolio was continually expanded to meet market and legislative requirements. Numerous machines were converted to comply with the EU’s Stage V emissions regulation, and the availability of electric drive concepts was further expanded. The product segment also plays an important part in resource conservation by continuing to recycle and reprocess used components as part of the Liebherr Reman programme.

At present, it is difficult to make accurate projections about the future performance of the Material Handling Technology product segment. Current developments give reason for modest optimism and suggest that there may be an upturn in the important markets in 2021.