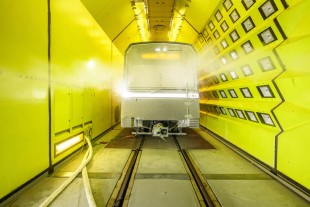 A new heating, ventilation and air conditioning system (HVAC system), which was developed and manufactured by Liebherr-Transportation Systems on behalf of Siemens Mobility for the so-called “X cars”, has successfully completed numerous tests in the Rail TeC Arsenal (RTA), the Climatic Wind Tunnel in Vienna (Austria).

The Liebherr HVAC system was tested in a test vehicle under extreme climatic conditions. For example, outside temperatures ranging from -25 °C to +45 °C and strong winds were simulated. In addition, the tests served to optimize the settings of the air distribution system in order to create the best possible comfort conditions for passengers.

The tests in the RTA are part of the approval process for the new generation of metro trains that Siemens deliver to Wiener Linien. They complement the temperature and function tests that Liebherr-Transportation Systems carried out in advance in its own test facilities in Korneuburg (Austria).