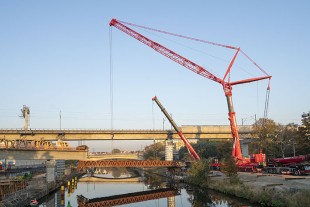 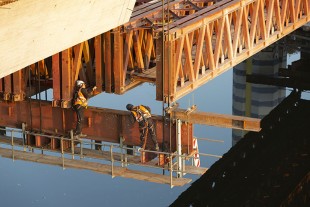 Because the company’s own mobile crane with a 1200 tonne lifting capacity was not available in the short term for the hoist, Mammoet planning staff René Xyländer and Tom Schladitz obtained a machine from Megalift based in Bremen to complete the demanding job in the German capital. This powerful Liebherr LTM 11200-9.1 mobile crane was fitted with a 48-metre luffing jib. This made it responsible for the hoists to the opposite bank and therefore for the large radii. The modern crane had to handle a gross load of 40 tonnes with a distance of around 50 metres. An LTM 1750-9.1 was assembled very close to it to take hold of the other end of the supports. Due to its significantly smaller radius, this mobile crane managed to operate with a smaller support base of ten by ten metres. In fact, there was no more space available at the extremely restricted assembly site. 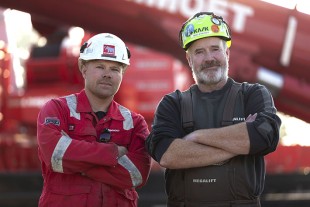 The site on the River Spree is part of Berlin’s S21 municipal railway project, an undertaking costing around 900 million euros, is aimed at improving links to the central railway station by creating a second north-south in Berlin’s municipal railway system (S-Bahn). This is not the first time that Mammoet cranes have worked on one of the sites of this major infrastructure project.

Mammoet’s German outlet based in Leuna (Saxony-Anhalt) has around 50 mobile cranes, the majority of which are Liebherr machines. The most powerful crane in the fleet is also a Liebherr product in the form of an LTM 11200-9.1.