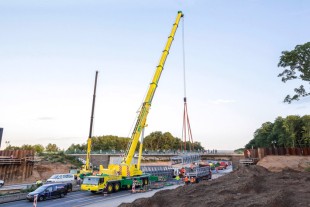 The entire section of the motorway was closed during construction of the temporary bridge, which meant the work had to be completed within a narrow time window. HKV Schmitz + Partner GmbH chose to deploy its Liebherr LTM 1300-6.2 to ensure a smooth and fast operation. "The 300-tonne crane provides strong lifting capacities and was perfectly suited for this application," said Michael Schmitz, Technical Director at HKV. The LTM 1300-6.2 was delivered to HKV in April this year and is equipped with Liebherr's innovative VarioBase® supporting system which provides increased safety and higher load capacities.

Fitted with the total ballast of 96 tonnes, Liebherr's 300-tonner soon got to work on the motorway construction site. The temporary bridge was delivered in four parts by semi low-loaders; the heaviest single piece weighed in at 41 tonnes and the length of the longest section was 24 metres. The LTM 1300-6.2 unloaded the sections from the low-loaders before placing them onto prepared foundations, where they were erected to form the temporary bridge.

At the same time, HKV used an LTM 1400-7.1 to install another makeshift bridge over an adjacent section of motorway.

The Cologne-based company HKV Schmitz + Partner GmbH celebrates its twentieth anniversary this year. With a range of services including crane works, heavy transport and assembly work, HKV attaches great importance to quality and safety and has thus been particularly impressed by the increased safety provided by the new Liebherr VarioBase® supporting system. "The cranes have higher lifting capacities with a flexible support system that can be adapted to local conditions. At the same time, the crane is safer to operate. At HKV, we are delighted with the new system," explained Michael Schmitz. The company's fleet includes 23 Liebherr cranes with up to 500 tonnes maximum lifting capacity. In addition to the LTM 1300-6.2, HKV this year has also taken delivery of a Liebherr LTF 1035-3.1, an LTM 1100-4.2 with VarioBase® and an LTM 1220-5.2 with VarioBase®. In addition, an LTM 1160-5.2 with VarioBase® will follow this autumn.