Liebherr’s refrigerators and freezers product segment posted a turnover of € 1,051 million in the 2021 business year. This represents an increase of € 44 million or 4.4 % year-on-year. 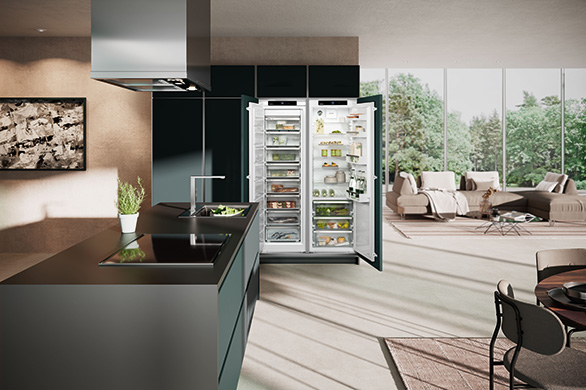 Strong growth in the USA and in Canada

The global market for large home appliances experienced modest growth last year. This was mainly due to growth in refrigeration appliances, which offset declining sales of freezers. In general, the Liebherr refrigerators and freezers product segment performed in line with the industry trend.

Although Germany, the most important market in this segment, saw a decline, turnover increased slightly in the rest of Europe. This can be attributed mainly to the growth in Bulgaria, France and Spain. There was also growth in non-EU countries, driven in particular by an increased turnover in Switzerland, Turkey and the United Kingdom. Despite strong growth in North America in the USA and in Canada, turnover in Central and South America was down for the second year in a row. Liebherr achieved significant growth in the Africa, Near and Middle East region, driven in particular by a notable increase in Israel, Saudi Arabia and South Africa. In Asia and Oceania, a decline in Japan and Indonesia was offset by growth in India, Taiwan and Vietnam.

These appliances are more than a new generation of built-in refrigerators, freezers and wine cabinets. They are a statement.

Liebherr’s refrigerators and freezers product segment launched a series of innovative new products in 2021. One milestone was the launch of a new built-in appliances range, which won the Red Dot Award in the “Best of the Best” category. The range offers appliances from the highquality entry-level to the luxury segment, combining resource-saving freshness technologies with superior design. All models are Internet-connected and feature innovative DuoCooling and NoFrost technologies. Premium technologies, such as the new BioFresh “HydroBreeze” feature that envelops fresh food in a cold mist, are also available. Liebherr also released the Monolith Bottom Freezer, a new appliance in the high-end segment. For commercial use, Liebherr presented a new range of beverage coolers with vertical LED lighting and permanent digital temperature display for a smart product presentation in the catering trade or at the point of sale.

For the year ahead, Liebherr expects once again to see significant growth in the refrigerators and freezers product segment. In light of the unfolding situation in Ukraine, it is impossible to reach a definitive assessment of the prospects for the year ahead.