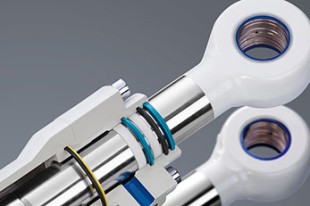 In 2014, Liebherr-Components Kirchdorf GmbH was set up as an independent company of the founding plant of the Liebherr Group at the site in Kirchdorf an der Iller. Since 1958 Liebherr has been developing and producing high-quality hydraulic cylinders for diverse applications at this site. With the spin-off into an independent corporate entity, on the one hand global market segments can be served flexibly and in a targeted manner, and on the other hand the group can press ahead with further expansion.

Securing success over the long term – New building in Oberopfingen

In order to guarantee maximum customer benefits over the long term and support the intended expansion, Liebherr-Components Kirchdorf GmbH built a new, ultramodern production plant for hydraulic cylinders, dampers and system solutions at the Kirchdorf/Oberopfingen location. In the first step an assembly and logistics hall was built with a total area of approx. 20,000 m² and a building for the overall management of Liebherr-Components Kirchdorf GmbH. The administration has been located in the new building in the Oberopfingen district since the middle of August 2017. The assembly, logistics, as well as the paint shop, will follow suit by the end of the year. Mechanical production shall remain at the site in Kirchdorf.