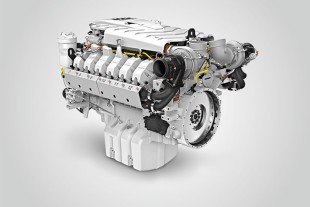 12-cylinder diesel engine manufactured in Bulle (Switzerland)
The engine satisfies the requirements of exhaust stage IV and Tier 4 final in force since 2014.

Liebherr Machines Bulle SA was founded in 1978. At the Bulle location, axial piston pumps and motors as well as splitter boxes were manufactured for earthmoving machines. In-house diesel engine development was added in 1984. Since then, Liebherr has been providing diesel engines for its construction machines from its own development and production.

The first gas engine was produced in 1996. In 2011 a new series followed based on modern diesel engine technology that is also licensed for operation with biogas. Production of the first gas engine generation was subsequently transferred to the Liebherr plant in Ettlingen.

Since 2014 new emission standards for diesel engines have been in force in the USA and the EU. Thus the development and production departments for injection systems and engine control systems at the Bulle location have been boosted in recent years. The expansion of capacities has enabled Liebherr to offer customized products for individual markets.

We need your consent This YouTube video is provided by Google. If you load the video, your data - including your IP address - is transmitted to Google and may be stored and processed by Google inter alia in the USA. We have no influence over further data processing by Google. By clicking on "Accept", you consent to the transmission of data to Google for this video in accordance with Art. 6 (1) (a) GDPR and at the same time expressly consent to the transfer of data to the USA in accordance with Art. 49 (1) (a) GDPR. If you no longer wish to consent to each YouTube video individually in the future and wish to be able to load the videos without this blocker, you can also select "Always accept YouTube" and thereby consent to the associated data transmissions and transfers to Google and to the USA for all other YouTube videos which you open on our website in the future. Please note that, in the opinion of the European Court of Justice, there does not currently exist an adequate level of data protection in line with EU standards in the USA, and at present we cannot provide suitable safeguards to protect your data and offset this shortcoming. Possible risks to you of data transfer to the USA are that access by state authorities cannot be excluded and that your data could be processed for reasons of national security, criminal prosecution or for other purposes in the public interest of the USA, possibly without you being informed separately and without enforceable rights and effective means of redress being available to you. You can withdraw consent that you have given at any time with future effect via the settings. For further information, please see our Data Protection Declaration and Google's Privacy Policy.