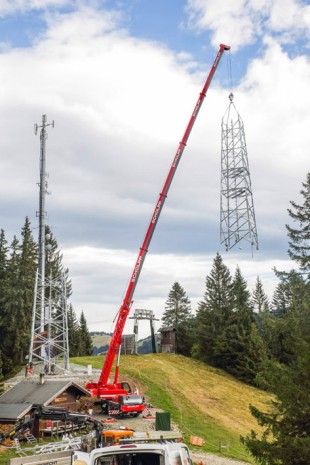 SCHOLPP Kran & Transport GmbH based in Stuttgart has ordered six new mobile cranes with load capacities between 70 tonnes and 350 tonnes from Liebherr. All the cranes feature the VarioBase® Variable Supporting Base. The first of two LTM 1100-4.2 models ordered has already been delivered and has already completed several jobs successfully.

Martin Scholpp explains: "VarioBase® not only enhances safety but also makes the cranes much more flexible to use. When you inspect a construction site one day and the crane arrives there the next day, things often look completely different. The Variable Supporting Base enables us to react flexibly to changed conditions and work with optimised load capacities where space is at a premium."

The LTM 1100-4.2 completed one of its first jobs in a high Alpine area in the Allgäu Alps. The team from SCHOLPP Kran & Transport GmbH erected a mobile phone mast in Balderschwang at an altitude of 1,500 metres.

SCHOLPP selected the LTM 1100-4.2 with VarioBase® for this job since the erection area for the crane on the site was rather limited. This meant that the two front supports could only be extended to 50 percent of their total extension length. For this job the new crane used its VarioBase® to hoist a weight of 8.7 tonnes at a radius of 19 metre above the front right support. The SCHOLPP team and the new crane completed this job in a few days with élan.