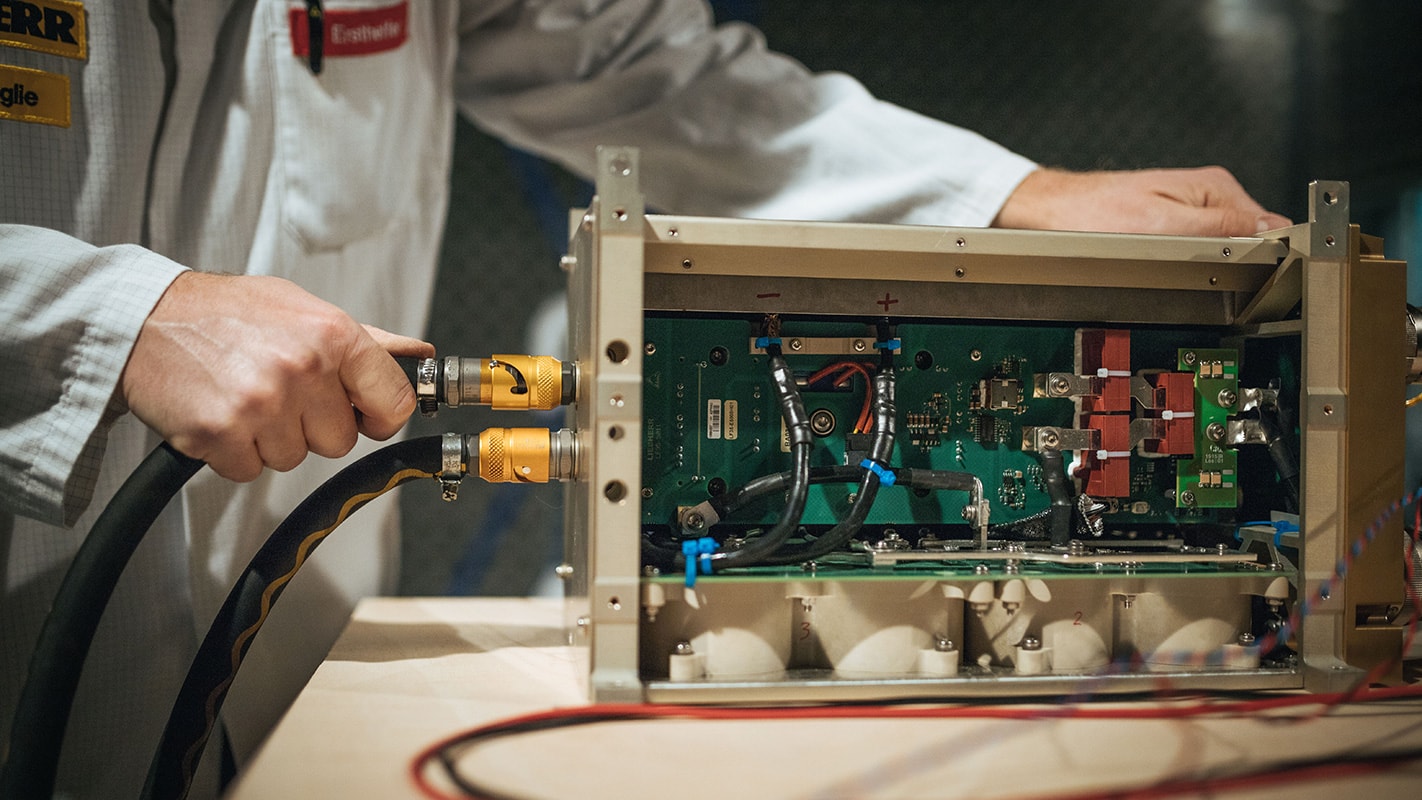 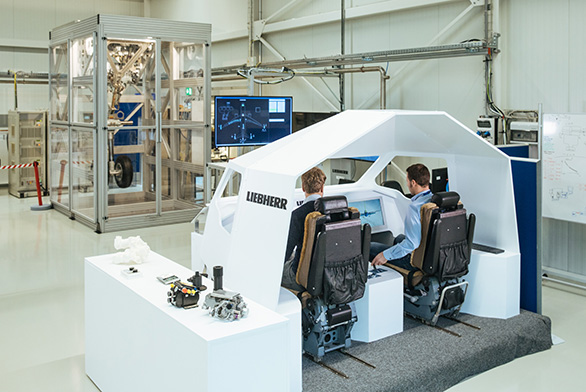 Working in the cockpit requires the utmost concentration. The aircraft accelerates and lifts off. At the push of a button, the landing gear retracts right in front of the pilots’ eyes. That’s because the nose landing gear is located directly in front of the cockpit window. The pilots are engineers, controlling a flight simulator at the Liebherr Aerospace E-Wing Research Centre in Lindenberg, Germany. 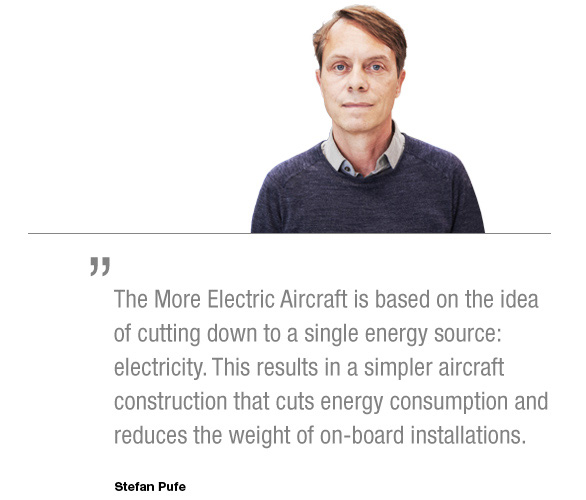 Stefan Pufe is Director of Research & Technology in Lindenberg, in charge of a team of engineers and developers working alongside two other project teams in Lindau and in Toulouse, France. The teams are steering a course that leads towards the next generation of aviation: the More Electric Aircraft (MEA). The goal of MEA is to make aviation of the future lighter, more efficient and better for the environment. That also means significantly fewer ducts, shafts and cables.

The teams are particularly focusing on the role of actuators. These are devices that convert centrally generated hydraulic energy into mechanical motion. The Liebherr developers in Lindenberg are working hard to find out how these kinds of hydraulic systems can be replaced by electro-mechanical or electro-hydrostatic systems in the future, which for example will be supplied with power by a central, electro-hydraulic, heavy-current-based Powerpac (540 V direct current).

‘At E-Wing, we’re using five test benches to test and monitor various options for controlling actuators, such as conventional hydraulic, electro-hydraulic and electro-mechanical’, explains Stefan Pufe. The various designs are connected to one another as demonstrators and the engineers can simulate how they would actually operate in real life. This is clear to see in the model of an aircraft wing. Here, all three types of hydraulic systems work side by side. The motions of the spoiler flaps are controlled from the cockpit simulator, demonstrating how they slow the aircraft after landing. 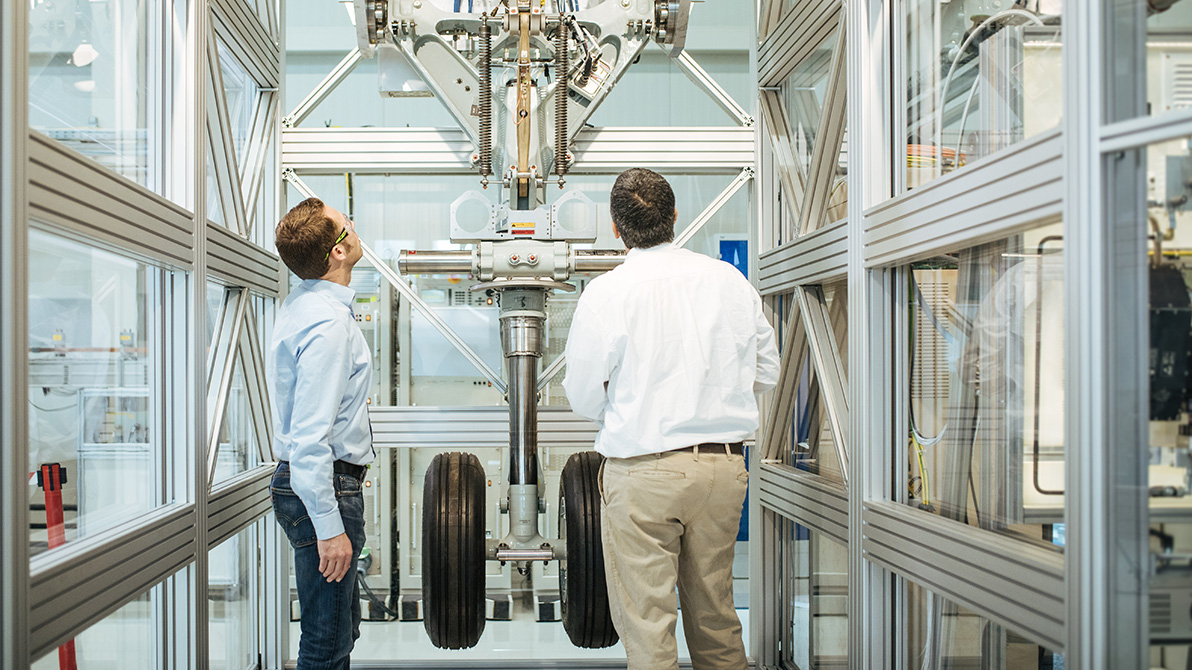 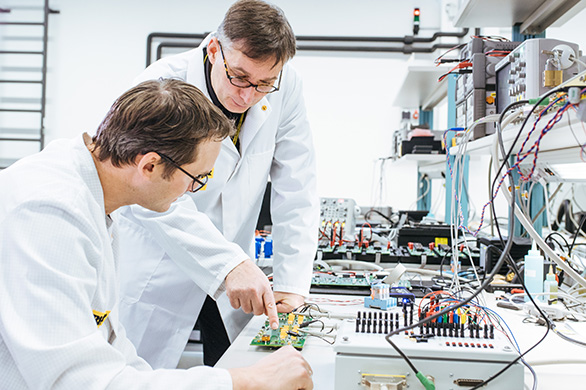 Lake Constance has historically been a favourite location for aviation pioneers. This is where the first Zeppelins took to the skies in the early 20th century, as well as the first all-metal aeroplanes and airships. Nearly 100 years later, an 80-strong team from Liebherr-Elektronik GmbH in Lindau (Germany) is working on new aviation innovations. Electrical engineers, software developers, machine engineers and testing engineers focus on an essential component of the More Electric Aircraft: power electronics.

This includes a golden "Power Pack". "The inverter is designed for power-optimised electrical aviation," explains Dr.-Ing. Alfred Engler, Head of Development Technologies at Liebherr-Elektronik GmbH. The inverter ensures that high-voltage direct current (540 V) is supplied to the actuators in aerofoils and control units, while also opening up entirely new possibilities for the aircraft’s climate control systems. Conventional aircraft use 115-volt, 400-Hz alternating current as standard. 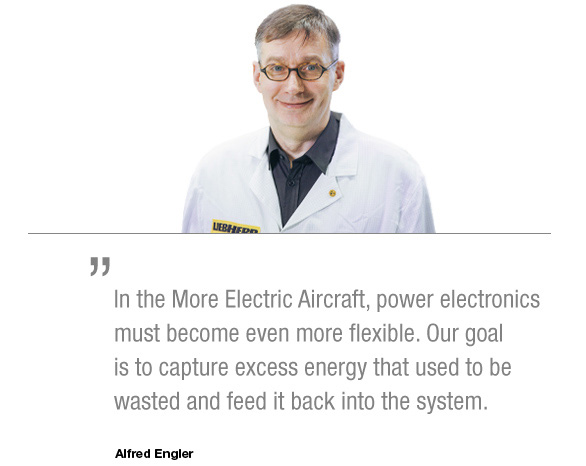 In the labs, the researchers are testing whether the new heavy-current-based equipment will perform as intended under any possible flight conditions. The power inverter is exposed to all kinds of adverse conditions, from intensive rattling and shaking, to powerful blasts of air and freezing temperatures, all while being carefully monitored. Safety is the top priority. 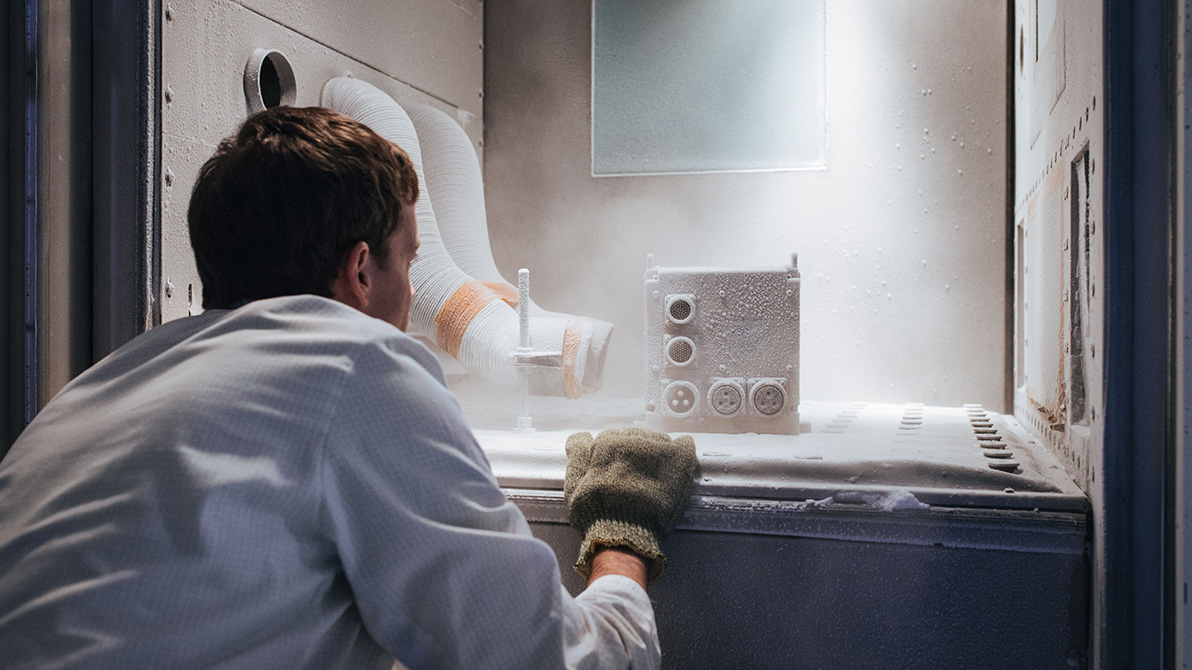 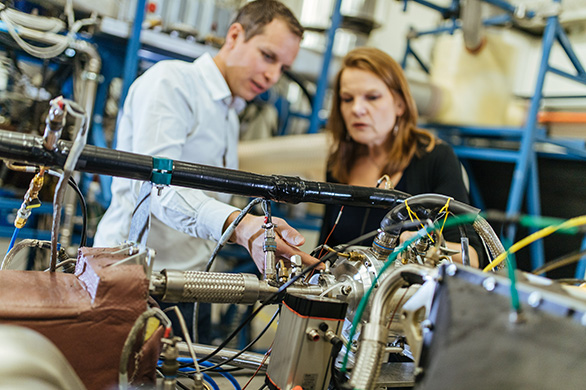 Toulouse, here, Nathalie Duquesne, Director of Research & Technology at Liebherr Aerospace Toulouse SAS is heading up the GETI project (Dynamic Electrical and Thermal Management).The Liebherr team is optimizing two main electrical systems for the environmental control system and the wing ice protection of aircraft leading edge. The goal is also to reduce the weight and fuel consumption of the More Electric Aircraft to achieve significant reductions in CO2 and nitrogen oxide emissions. 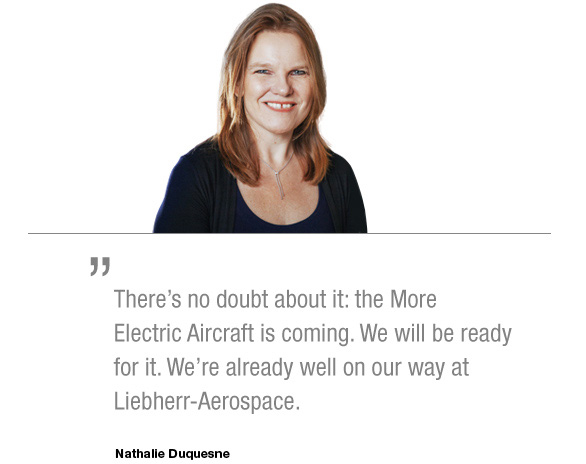 ‘In parallel, flight test campaigns operated on both ATR72 and A320 flying test beds in 2016, which were focused on electrical environmental control systems, have proven a competitive solution for this more electrical vision’, says Nathalie Duquesne. Both intensive internal tests and flight tests validated fully the robustness and the stability of the pressurization and air conditioning systems.

‘We've designed a promising electrical environmental control and ice protection architectures for the More Electric Aircraft. The result is fully satisfying. Now, it’s time to optimise the individual components even further and bring the system to maturity for future proposal. The future of aviation has begun’, says Nathalie. ‘We at Liebherr are a part of that.’ 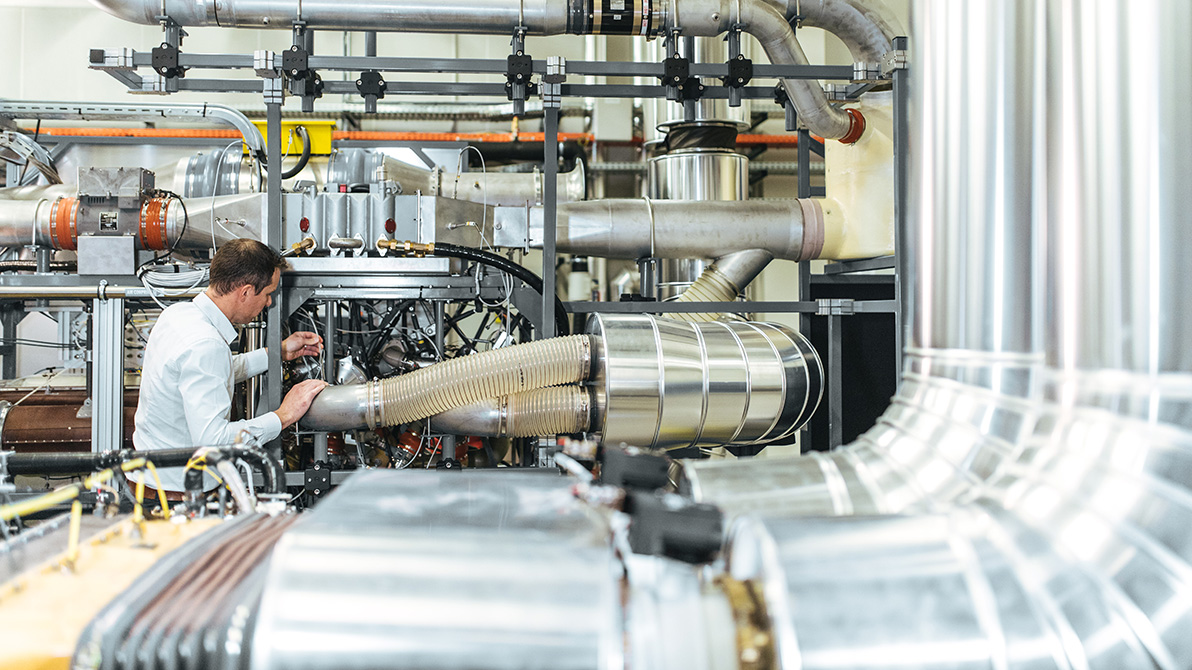 Aircrafts require huge amounts of power and energy to operate their moving parts and to control their air pressure and cabin pressure. Until now, this has usually been achieved using hydraulic or pneumatic systems. In the More Electric Aircraft, these systems will be increasingly supported or even replaced by electrical alternatives. It’s therefore useful to gain a more precise understanding first of the energy sources that are conventionally used in aviation.

This term comes from the Greek words for water (‘hydro’) and pipe (‘aulos’). Hydraulic liquid, usually a special type of mineral oil, uses pressure and liquid flow to transfer energy and is capable of generating incredibly high levels of power. For example, hydraulic lines are capable of moving an aircraft’s aerofoils, which are the size of barn doors, even when faced with hurricane-force winds. The movement of the control stick triggers the corresponding command via sensors. The disadvantages of hydraulics are that hydraulic systems, containing liquid, are very heavy. It is very labour-intensive to install the lines, and the system must be ready for use at all times, so it is constantly pressurised, which results in heavy fuel consumption.

The term pneumatics also comes from the Greek (pneuma = wind) and refers to the use of air pressure inside a closed system. In aircraft, the required air is derived from the compressor stages of the engine. This is directed via lines and pipes into the climate control system, where the temperature is controlled using a complex system of compressors and turbines. The pressure is adjusted according to the flight level, also known as the cabin altitude. The span of air pressure in a passenger aircraft ranges from about 1,000 hPa to about 200 hPa at cruising altitudes of 33,000 feet and higher. During flight, air pressures of no less than 700 hPa are considered comfortable for passengers. This must be maintained throughout the duration of the flight.

Global CO2 emissions from air travel could rise to between 10% and 25% by 2050 unless significant technological advancements are implemented. This has been forecasted in a study conducted by the consultancy firm Roland Berger. Currently, there has already been a 2.6% increase.

Electrical aviation represents one possible significant technological advancement. The first fully electric test models have already successfully taken off. Experts are still not completely sure whether these are already the first step on the road from More Electric Aircraft to All Electric Aircraft. Modern batteries are currently not yet powerful enough for these types of emissions-free aircraft. The path of development therefore continues for hydrogen technologies, bio-fuels and synthetic fuels, all of which must be factored into the development of emissions-optimised aviation.

Yet aircraft manufacturers, along with market experts like Roland Berger, predict it is only a matter of time until clean electric aircraft take to the skies. All signs indicate that it is probably a matter of years now, instead of decades. 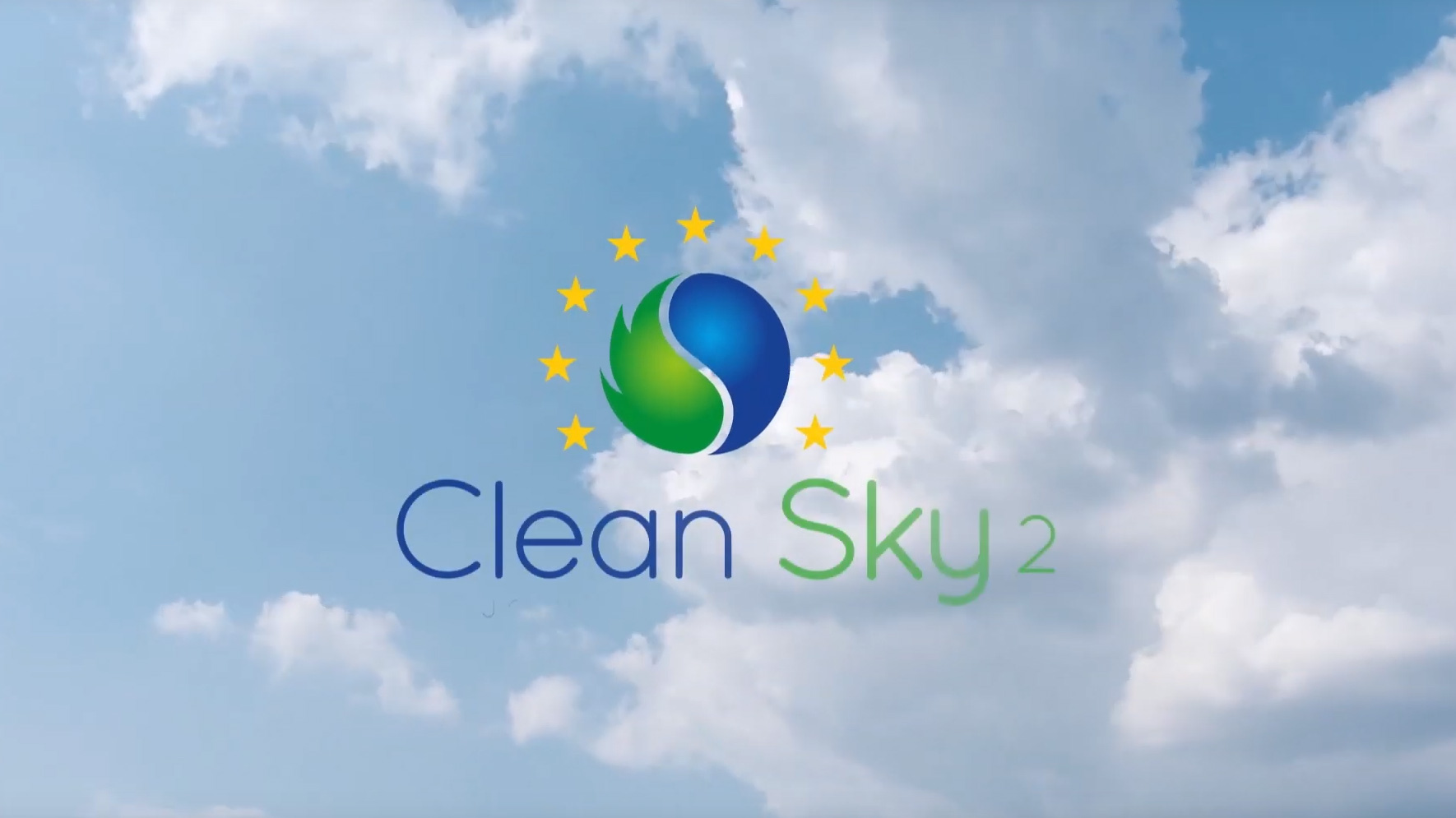 Seventy partners from the aviation industry signed up to the EU’s Clean Sky Joint Technology Initiative (JTI) in 2008. Their goal is to reduce CO2 emissions from aircraft by 50 per cent, nitrogen oxide emissions by 80 per cent and noise pollution by 50 per cent. The Clean Sky 2 project was launched in 2015 and will continue until 2022. The project focuses on developing key technologies for the More Electric Aircraft in the areas of flight control for aeroplanes and helicopters, as well as climate control.

Funding of this research project

This project has received funding from the Cleans Sky 2 Joint Undertaking under the European Union's Horizon 2020 research and innovation programme under grant agreement No. 807081.The results in this publication represent only the author´s view. Clean Sky Joint Undertaking is not responsible for any use that may be made of the contained information.

This project was supported by the German Federal Ministry for Economic Affairs and Energy on the basis of a decision by the German Bundestag.

In order to guarantee better readability we only use the male form for job titles, with latter being representative of a gender-neutral designation. When doing so, we always address all gender identities (m/f/d).

Head of Construction Werner Haas works hand in hand with his son Julian at Bauma 2019 to build one of the largest exhibition booth in the world.