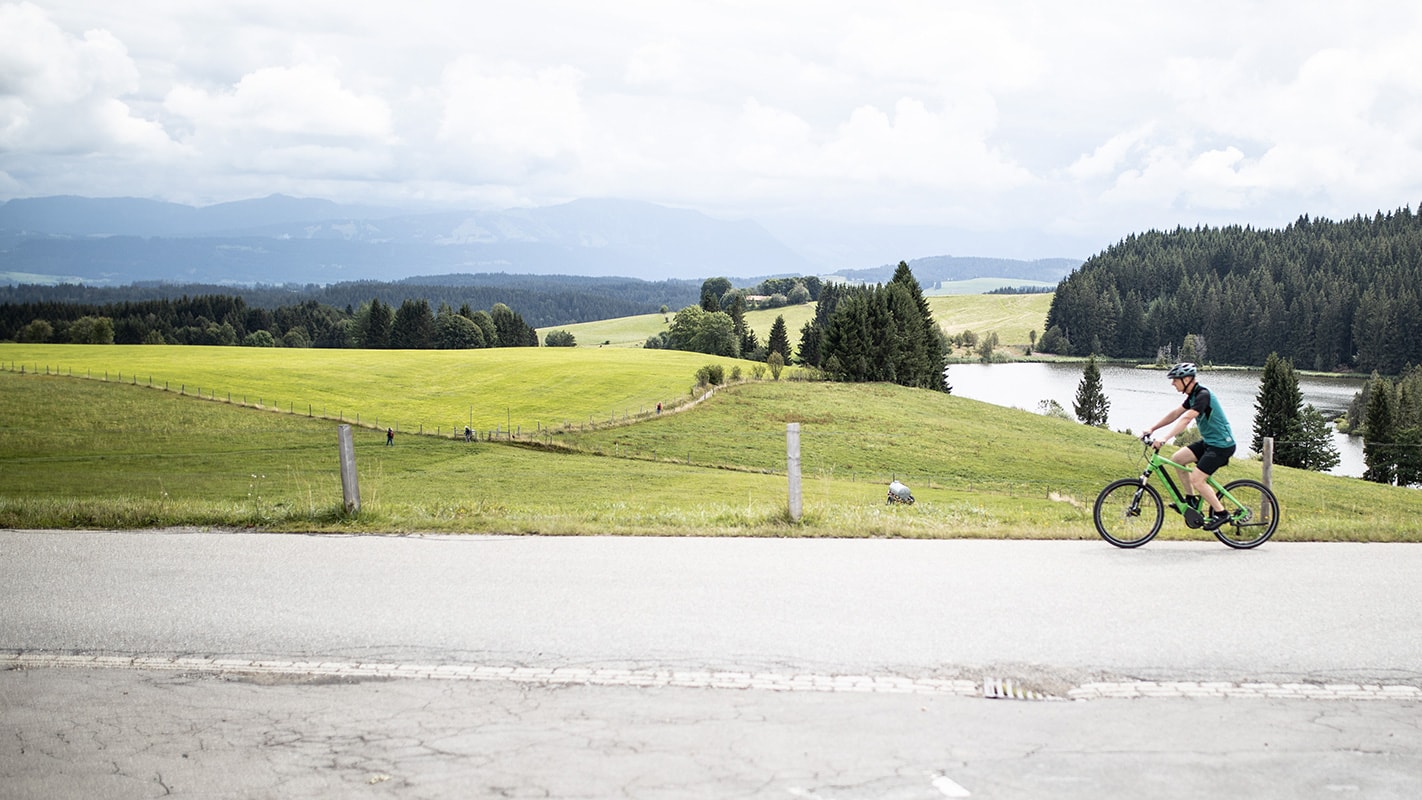 As quiet as possible

E-bikes and e-scooters are all the rage nowadays because they are so much fun and easy to ride. Modern versions have done away with noticeable judder and annoying extraneous noise thanks to compact high-precision gear technology. 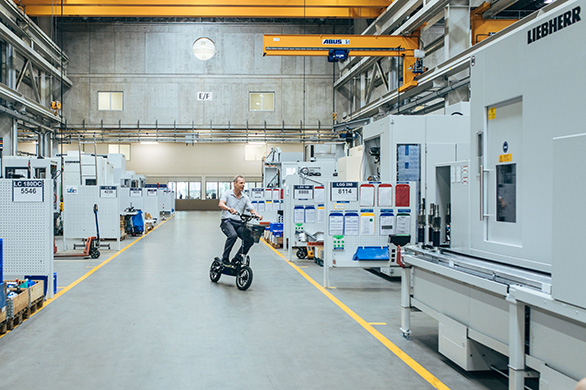 Norbert Ambros rarely lets anything throw him off course. This is also true when he sees the bemused faces of his colleagues as he whizzes across the factory floor at Liebherr-Verzahntechnik GmbH in Kempten on a futuristic electric vehicle that looks like a cross between a scooter and a bike. “This scooter has been designed to be used at trade fairs where Liebherr staff continually have to make their way across the large exhibition halls,” explains the seasoned e-bike enthusiast. “The gear technology in the motor determines how comfortable the journey will be – it should ideally facilitate powerful acceleration with as little noise from the motor as possible.”

Gear hobbing and gear grinding machines produced by Liebherr for customers all over the world make all this possible. Norbert describes the plant’s machinery as, “Cutting-edge technology at its best, providing high-precision gear mechanics for applications where space is a premium”. In his role as senior mechanical engineer, he coordinates machine acceptance tests, test runs and any fine tuning that needs to be carried out before the machines are delivered for use in various production processes. 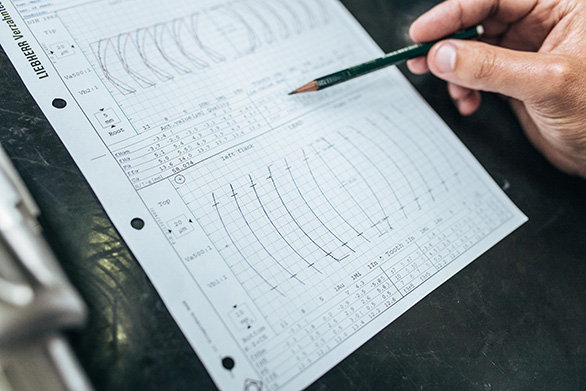 But does this mean that e-mobility is redefining drivetrain technology and increasingly making gear wheels redundant? “Lower volumes are needed to fulfil e-mobility requirements,” says Norbert Ambros. “As it’s becoming increasingly important for the gears to function more cleanly and quietly, the gear wheels need to be of an exceptional quality.”

Ambros emphasises that this is why it is even more important to use innovative machinery which can deliver an excellent surface finish and maximum precision. The machines should also run exceptionally smoothly and ensure the geometry of the tooth flanks is absolutely perfect. It is especially important to get the microgeometry right to ensure that the teeth engage correctly under stress. And this is particularly critical since the gear wheels are specially designed in accordance with the natural frequencies of the drivetrain and to dampen drivetrain vibration. 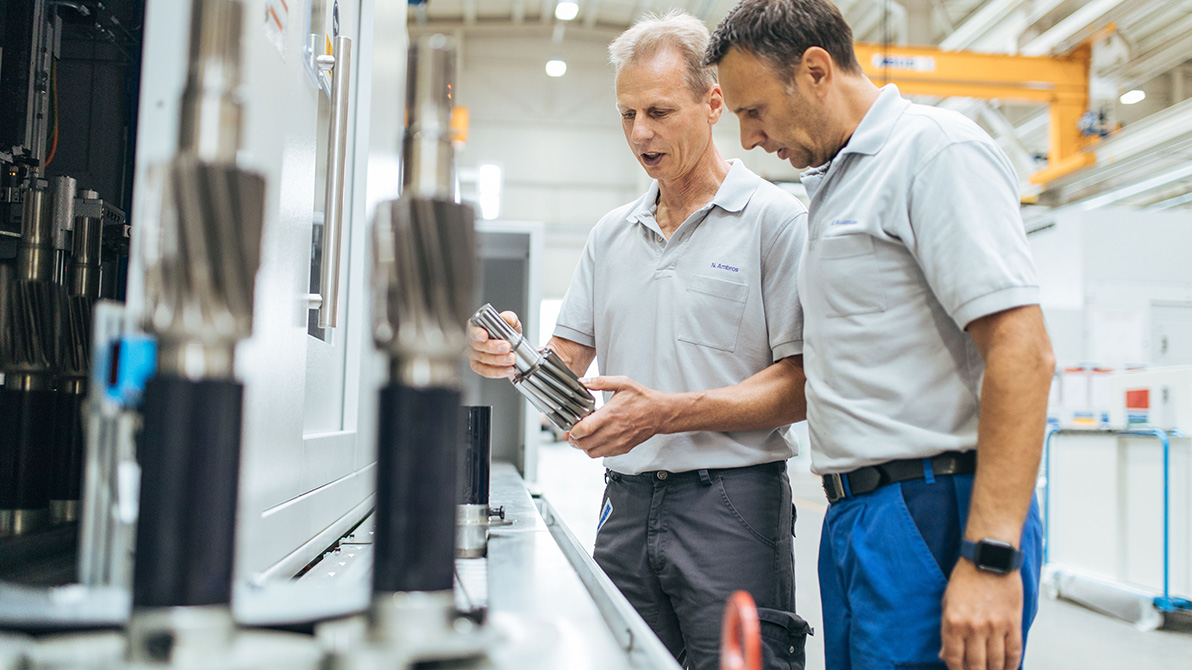 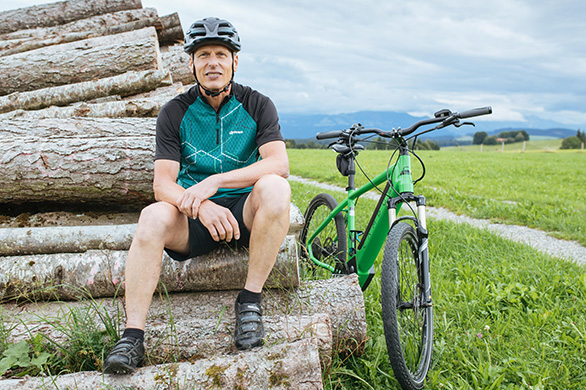 The moment of truth at Eschacher Lake

Norbert Ambros is a passionate cyclist and nature lover. He is also a tech freak. Norbert switched to riding e-bikes years ago so that he could embark on as many varied and long cycling trips with his wife as possible. The fruitful partnership between Liebherr and Morat Swoboda Motion may also benefit him in the future.

The 58-year-old senior mechanical engineer has worked at Liebherr-Verzahntechnik GmbH for 43 years. He loves the fact he can experience the benefits of a technology he has worked with his entire working life during his leisure time. “I am reminded every day how important our work is.” Ascending the mountainous terrain above Eschacher Lake is a good example. He describes the way the small high-tech gear wheels come into their own here and deliver such strong torque. He also notes how the noise of the motor is only perceptible from its very quiet hum. 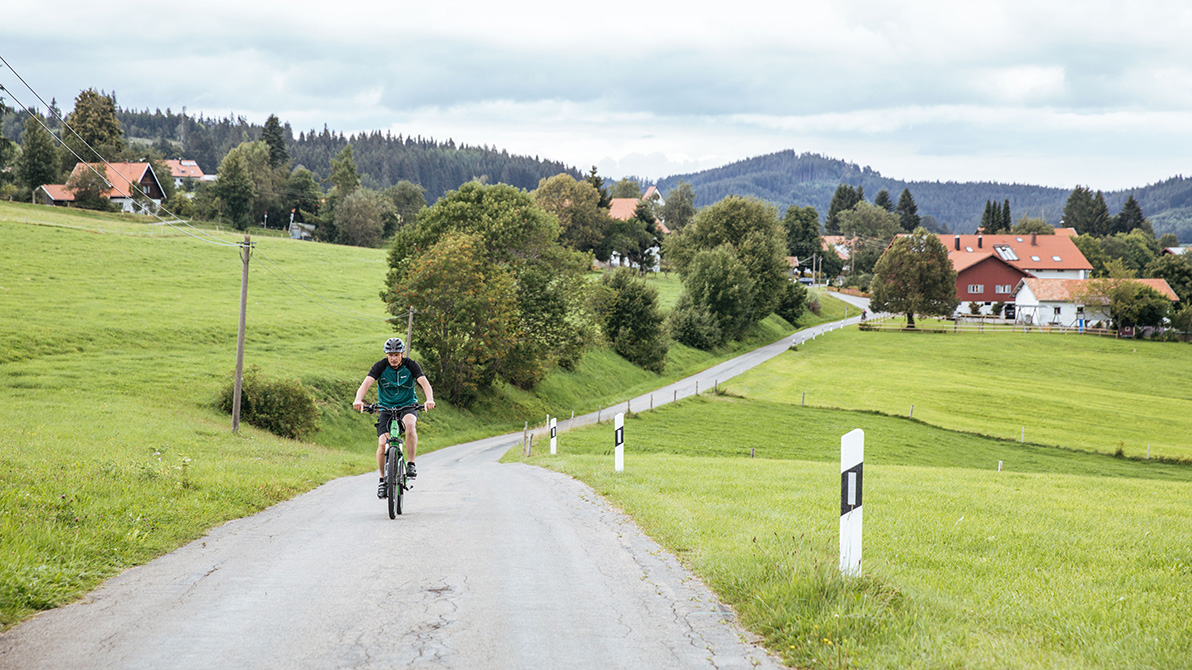 When I'm out in nature on my e-bike, I don't want to hear any annoying engine and transmission noises.

“When I am out enjoying nature, I just want to enjoy the scenery, feel the wind in my face and hear the birds singing. Nothing else,” he says emphatically. “Drive wheels that have been ground with microscopic precision are a critical factor. They make the vehicles reliable, durable and comfortable to ride. I would rather avoid trips to the bicycle repair shop or having to continually carry out maintenance on my bike.”

From his experience as a senior mechanical engineer and keen cyclist Norbert Ambros is certain: “I can see so much potential in e-mobility and not just for e-bikes and e-scooters. I want to be among the pioneers through my role at Liebherr. The fact that these kinds of innovations allow me to have so much fun outdoors in the beautiful Allgäu countryside is a good enough reason alone.” 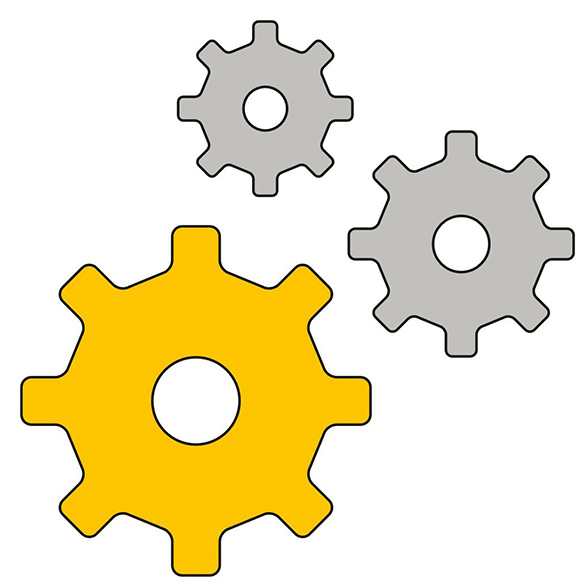 A short cultural history of gears

The Ancient Egyptians were already familiar with gear wheels. During the 3rd century BC, to make their work easier they fitted pegs to wheels and used them to operate pulleys that consisted of ropes that were run over rollers.

The Antikythera mechanism was a more refined version and the ancient precursor of the astronomical clock. Around 100 BC, the mechanism used a series of gear wheels and dials to show the various relationships between astronomical positions and calendar events.

Gear wheels came to Europe in the 9th century. They were initially used in water mills and then later in windmills. Leonardo da Vinci was about a big fan of gear wheels. Da Vinci scholars have counted around 1,500 sketches of gear wheels designed to be used in a variety of ways in his manuscripts.

The gear wheel’s finest hour was when it ushered in the steam engine in the 18th century. Gear wheels increased the power that could be transmitted and changed the material requirements. They would now be predominantly made of metal instead of wood. A new and highly precise type of fabrication saw the arrival of helical and double helical gears. This led to the invention of differential gears and new types of machinery, especially in tool manufacturing.

The Clock of the Long Now demonstrates that gear wheels will be with us for a long time to come. This 150-metre mechanical masterpiece includes numerous gear wheels which ensure that the clock ticks only once every year for 10,000 years. A group of scientists, engineers, designers and philosophers worked on the concept for 20 years before it was finally set in motion in the heart of the West Texas Sierra Diablo mountain range.

Pedelec, S-Pedelec and E-Bike: What is What?

Pedelec (pedal electric cycle) assist the cyclist when pedalling by means of a motor with a maximum output of 250 watts. You are only permitted to travel at a maximum speed of 25 km/h whilst pedalling. The faster you pedal, the quicker you go. From a legal perspective, a pedelec is considered to be the same as a bicycle and you don’t need a licence to ride one. Bicycles and pedelecs are the only form of two-wheel vehicle that are permitted to pull child trailers.

S-Pedelec are fast pedelecs and are also called Swiss class or S class bikes. They have been classed in the moped road vehicle category. The motor assistance shuts off when the bike reaches a speed of 45 km/h. Currently the nominal motor power output can be no more than 500 watts. To ride an s-pedelec in Germany, you must be at least 16 years old, have a class AM driver’s licence and a valid insurance certificate. The cyclist must also wear a suitable crash helmet.

E-Bike are classed in the moped road vehicle category. They can be driven at the touch of button without the need for pedal power. In Germany, a licence is required once the bike exceeds 6 km/h. The motor power output can be no more than 500 watts. To ride an e-bike, you need an insurance certificate, an operating licence and the cyclist needs to have passed the moped test as a minimum. 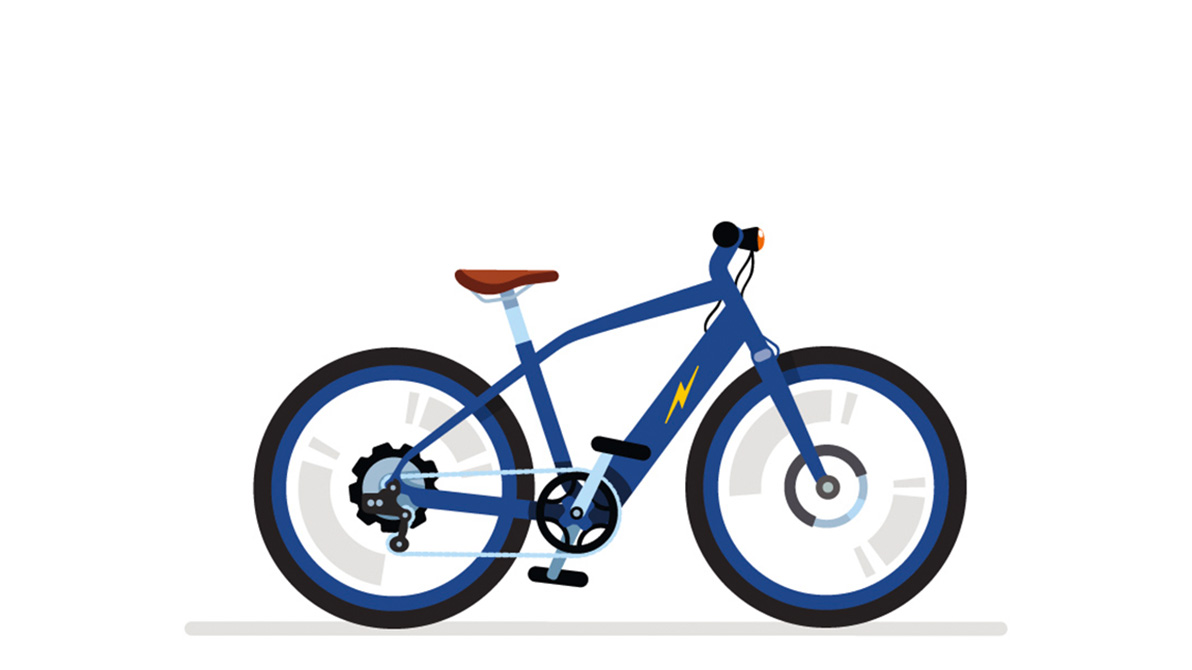 The most widely used drive system is a mid-drive motor located in the central bottom bracket area. Rear-wheel or front-wheel drives are alternatives but are not often installed.

400- or 500-watt electric bicycle batteries are usually installed on the pannier rack or are integrated into the frame. A full battery will last between 80 and 100 kilometres under normal use.

The electric wheel motors are controlled by sensors designed to provide the right type of assistance and to control speed. The cadence sensor recognises when the chain is moving and then controls motor output.The torque sensor measures the amount of force the rider is applying on the pedals and provides the right amount of motor power for the assist level.The speed sensor works with the other sensors and prevents the motor from starting without being asked to do so. It provides assistance when the bike travels over 25 km/h. 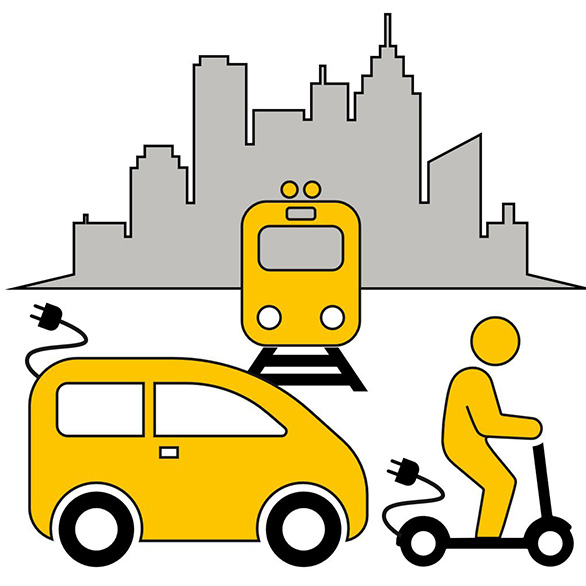 40.3 million pedelecs and e-bikes are expected to be sold by the sector around the world by 2023. 31.7 million had been sold by 2014. (Source: Electric Bicycles Report)

48,1 years is the average age of a pedelec/e-bike cyclist. (Source: ScienceDirect)

9.4 kilometres is the average distance travelled by an e-cyclist; one kilometre more than cyclists that rely on muscle power. (Source: Journal Transportation Research Interdisciplinary Perspectives)

1,735 is the number of MET mins/week achieved by an average e-cyclist. The unit of measurement is the Metabolic Equivalent of Task (MET) which expresses an individual’s physical activity and energy consumption levels. By comparison, the MET reading for a conventional cyclist is 1,656 MET mins/week.(Source: European Research Project on Physical Activity Through Sustainable Transport Approaches)

66 percent of 16 to 64-year olds in Germany believe that e-scooters are a good addition to the public transport system. Only 29% of people over 65 years old are convinced this is true.

Liebherr offers a wide selection of high quality gear cutting machines and is one of the leading specialist for automation solutions.