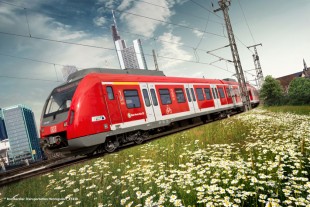 The Liebherr air conditioning units are mounted on the roof of the ET 430 suburban railway train. – © Alstom/Daniel Stephan

The Liebherr air conditioning units are mounted on the roof of the ET 430 suburban railway train. – © Alstom/Daniel Stephan

Since the end of 2014, the modern and environmentally-friendly suburban railway trains have been in service on the Rhein-Main rail network on the S1, S7, S8 and S9 lines. They can also be used as replacement vehicles on other routes.

The ET 430 series is the evolution of the ET 422 fleet. It is a four-part, electric multiple-unit train and is used by Deutsche Bahn on the suburban networks in various metropolitan areas. Since 1999, more than 700 trains of the ET 422, 423 and 430 series have been fitted with air conditioning systems from Liebherr.