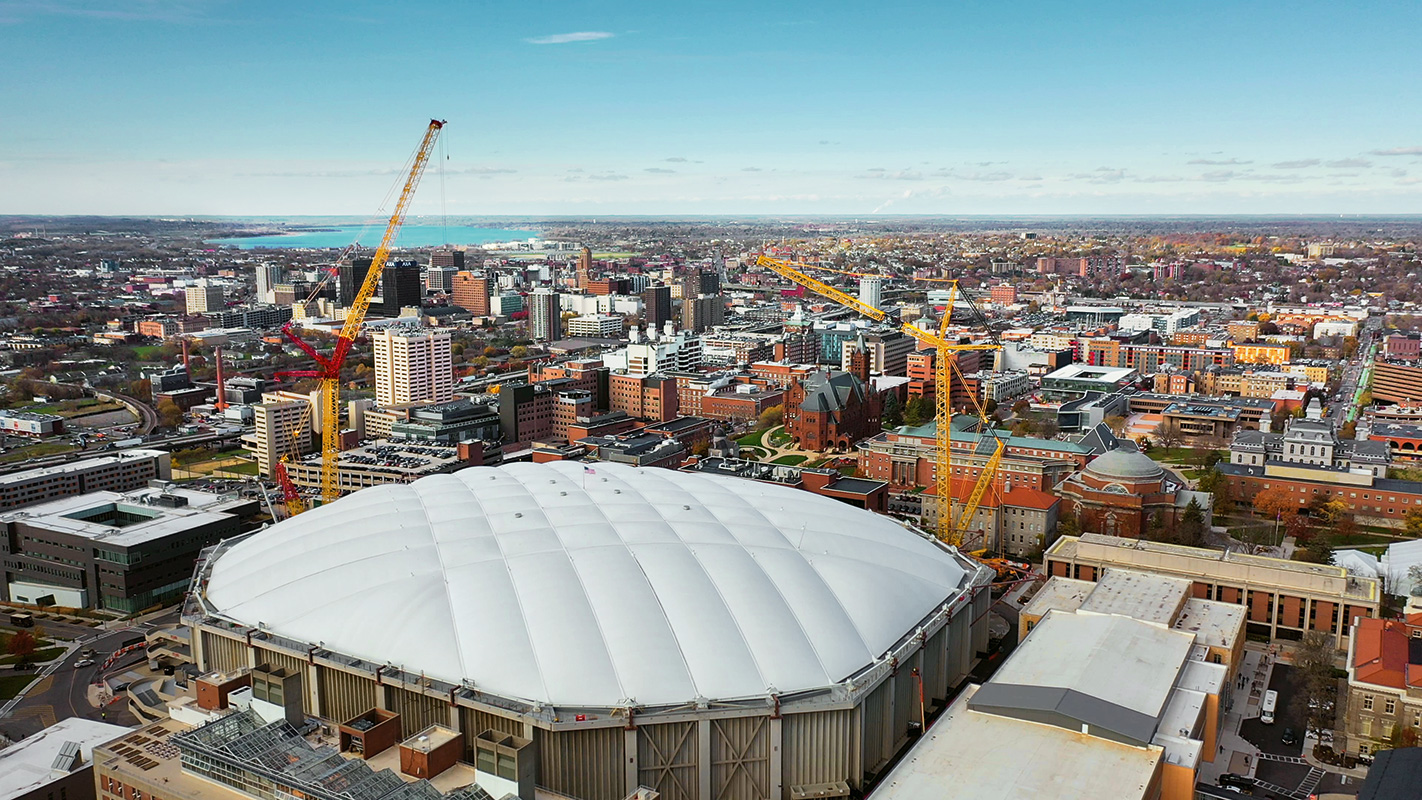 A new landmark in Syracuse

Walt is the new big man on campus at Syracuse University. By any measure, he stands out above the crowd at 580 ft (177 m) tall with the ability to move 1,100 US-tons (998 metric tons). Even standing next to another well-known entity – the Carrier Dome – Walt captures the attention of the entire community every day. Walt is the humorous nickname that university students have dubbed the Liebherr LR 11000 crawler crane that towers above the venerable indoor stadium in Syracuse, New York. North Carolina-based Buckner Heavylift Cranes is providing the LR 11000 along with a Liebherr LR 1750-2. Both cranes are handling the big job of replacing the stadium’s roof.

In the past, we have been involved in the erection of the retractable dome on the Arthur Ashe tennis stadium.

The Carrier Dome is the last stadium in North America to utilize an inflatable dome.

“The Carrier Dome is the last stadium in North America to utilize an inflatable dome,” said Jim Jatho, Buckner’s heavylift and rigging planner. “Renovations had been put off for years but finally began mid-2019. The inflatable dome will be replaced with a compression ring that will support the new roof with guyed cables strung above the field. Completion is expected to be early 2020.”

Opened in 1980, the dome can accommodate approximately 49,000 spectators. It’s home to the university’s football, basketball and lacrosse teams and also serves as the venue for the school’s annual graduation ceremonies. Winter weather can be harsh and unpredictable and include heavy snowfall in upstate New York. The stadium’s existing inflatable roof required snow removal and maintenance during heavy snowfalls in order to keep it aloft. By replacing it with a solid permanent roof, officials will no longer need to perform that type of maintenance. 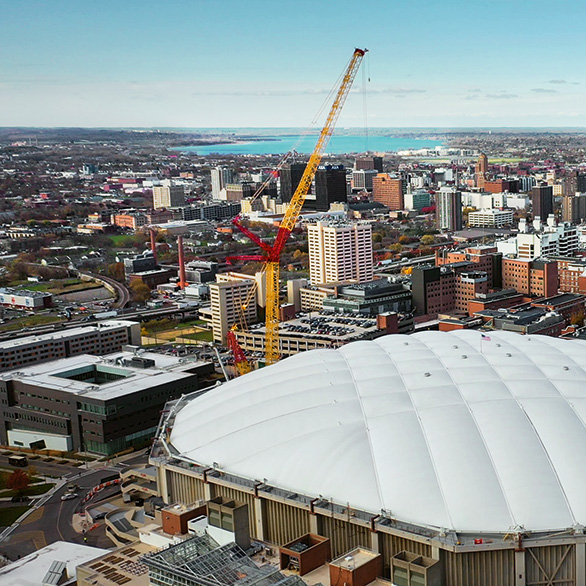 Buckner’s Liebherr cranes are erecting box trusses for the stadium roof’s new compression ring. The new permanent roof will have a lifespan that’s twice as long as the former inflatable roof. In addition, a host of other renovations, including a new air conditioning system, scoreboard, interior lighting and Wi-Fi are expected to revitalize the game day experience for visitors. The roof project should be completed in 2020, and the other upgrades to the building, should be completed by 2022. Overall, the project will cost about $118 million.

“In the past, we have been involved in the erection of the retractable dome on the Arthur Ashe tennis stadium, which also involved an LR 11000 as well as the iris roof of the Mercedez-Benz Stadium in Atlanta, so we weren’t in uncharted territory,” Jatho said. “The exceptionally tight layout required threading the needle as we built the main boom and luffing jib down an alley between buildings.”

According to an account in the university newspaper, a first year university athlete gave the LR 11000 its new name on the fly one evening while returning to their dorms. He decided to start an Instagram page for the crane and the account, @walt.the.crane, drew thousands of followers in just a few weeks. The student and regional news reports about the crane quickly helped boost Walt’s fame. A senior at Syracuse, a marketing major, contacted the Instagram account founder and soon merchandise featuring Walt was available – T-shirts, hoodies, hats and a smart phone case.

The exceptionally tight layout required threading the needle as we built the main boom and luffing jib down an alley between buildings.

Clyde Preston Buckner started CP Buckner Steel after his military discharge following World War II. The company has been family owned and operated since 1947. Buckner takes pride in being a tight knit company with employees who have been a part of the work family for over 20 years. Based in Graham, North Carolina, between Greensboro and Raleigh, the company employs 205 people and works on projects nationwide.

In early 2018, Buckner shifted its focus to heavylift crane services to better serve customers. The company strives to be a true stakeholder with every client, becoming the vehicle for success in challenging ventures, achieving the goal of providing safe, efficient and experienced solutions to complex and demanding projects.

Read more about "Bridging the gap".

Are you interested in the program of the Mobile and Crawler Cranes division? Click here for the product information.