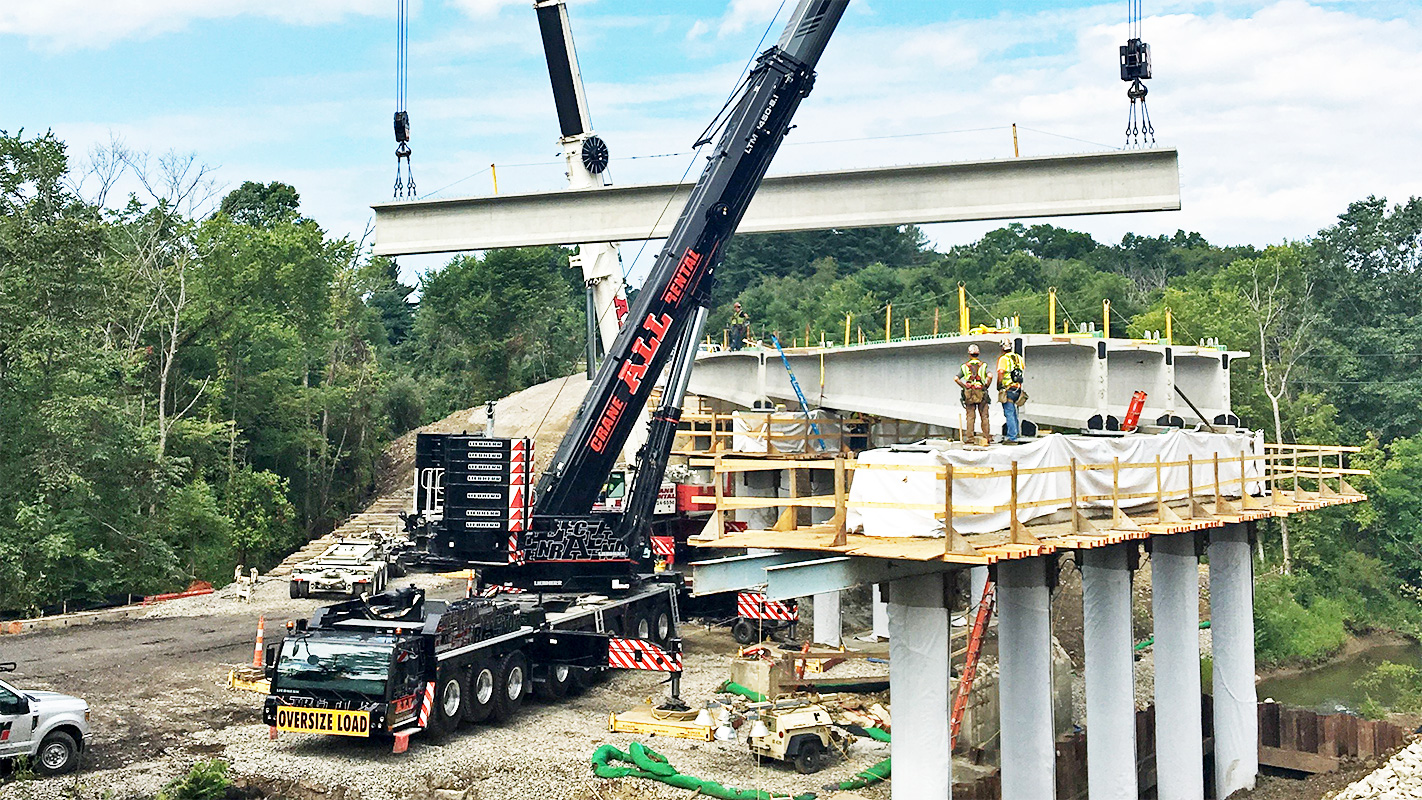 In Harrison County, Ohio, about two hours south of Cleveland, Ohio, U.S. 22 is a critical route through a largely rural community on the state’s east side near the Ohio-Pennsylvania border. The effects of any closure to the route are felt immediately by motorists in the area.

For example, when a bridge on U.S. 22 needed to be replaced, the detour added 30 miles (48 kilometers) to the route. It was important that the bridge replacement be performed efficiently and correctly to help get the traffic flowing again as soon as possible.

The ease of takedown and setup of both Liebherrs was advantageous for these working conditions.

The 461-ft (140-m) bridge was constructed in four sections over a creek bed that channels to nearby Piedmont Lake. The surrounding terrain consists of steep slopes and heavily wooded areas, making the mobility of the cranes integral to the success of the project. The cranes worked in a variety of configurations. Sometimes they were side-by-side, other times across from each other. For setting the middle sections– those closest to the creek–the LTM 1250-6.1 was set up in the actual creek bed while the LTM 1450-8.1 was positioned on higher ground.

When the middle sections were set, the LTM 1450 was at the top of an embankment with its boom extended to 80 ft (24 m) so it could reach out across the creek, while the LTM 1250’s boom was extended to 60 ft (18 m) as it reached up from the creek bed. “We had to move cranes every day because of the variety of setups we needed to place the beams,” said Greg Eichler, project manager for The Ruhlin Company. “The ease of takedown and setup of both Liebherrs was advantageous for these working conditions.”

The final pick was the most dramatic, as crews employed a transfer block so the cranes could make a handoff. To set this final section over the creek, the LTM 1250 was positioned on the west side where the beams were trucked in, and the LTM 1450 was on an abutment on the far side. The LTM 1250 picked the rear half of the 102,000-lb (46,200-kg) beam and swung it over the creek. Simultaneously, the truck backed up. The LTM 1250 then set the load on the transfer block as the other crane swung in, took the weight, and transferred the load in mid-air.

Liebherr cranes are known for easy transport, fast setup and lifting power. “The versatility and power of the Liebherrs made them a natural fit,” said Paridon. “The bridge location doesn’t have the easiest access, and the terrain is multifaceted once you get there. With our experienced lift team at the helm, these machines were able to move freely about the site and accomplish the work smoothly and efficiently.”

Based in Cleveland, the All Family of Companies is the largest privately-owned crane rental and sales organization in North America, with 36 branches operating under multiple names – All, Central, Dawes, Jeffers and ALT. Established in 1964, All Crane offers rental, sales and parts. Their focus includes commercial construction, roads and bridges, power generation and facility maintenance. The company founders are still involved in the company’s core operations.

Project in the dirt improving travel in the sky

Read more about "Project in the dirt improving travel in the sky".

Are you interested in the program of the Mobile and Crawler Cranes division? Click here for the product information.