The Maritime Cranes product segment recorded sales revenues of € 795 million for 2020, representing a € 92 million or 10.4 % decline compared with the year before. 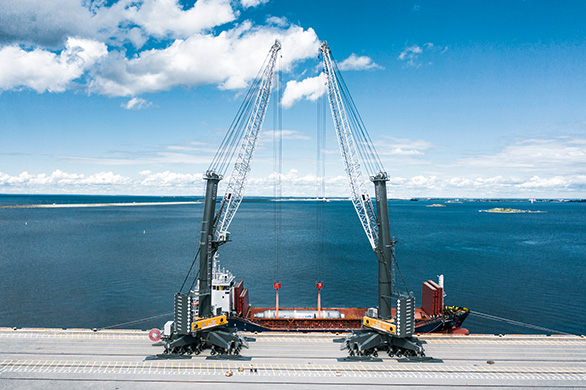 The economic uncertainty also impacted the world market for maritime material handling equipment. The sector had to face many challenges, including restrictions on the flow of goods, as well as periodic disruptions in transport networks and supply chains.

In spite of this, Liebherr was able to maintain its position as world market leader in mobile harbour cranes. In the area of port equipment, a year-on-year sales growth in non-EU countries was achieved. The product segment's key market, the EU, remained stable. While demand for reachstackers and ship cranes declined significantly, demand for offshore cranes was slightly above the previous year.

Growth varied among the Maritime Cranes product segment’s various sales regions during the reporting period. Significant growth was achieved in non-EU countries, particularly in Russia. Strong growth was recorded in Asia and Oceania. Australia and New Zealand developed well in particular. In the European Union, sales were below the previous year's level. This downward trend also extended to North America, Africa and the Near and Middle East, and Central and South America.

The Liebherr Remote Service app is a service tool that uses visual information to support customers more effectively and helps them to avoid unnecessary downtimes.

Despite global travel restrictions, Liebherr successfully put numerous new cranes into operation throughout the year. A particular highlight was the assembly of an LHM 420 mobile harbour crane in Campana (Argentina) in May. It was the first time that Liebherr service technicians assembled a crane remotely from Germany using the new Liebherr Remote Service App. All customers had free access to the app until the end of 2020 as part of the extended test phase. The first external loading of monopiles for offshore wind turbines by the Liebherr portal crane TCC 78000 in the international port of Rostock (Germany) was another highlight.

Digitalisation topics were the fundamental research and development focus throughout the reporting period. Work continued on assistance systems as well as on research into semi-autonomous cranes, with a focus on automated bulk material and container handling. The close collaboration with international universities and research institutes, such as ETH (Switzerland) and the Technical University (TU) of Dresden (Germany), was continued.

Despite the challenging market conditions in the maritime sector, Liebherr remains optimistic that the Maritime Cranes product segment will develop positively in the current financial year.