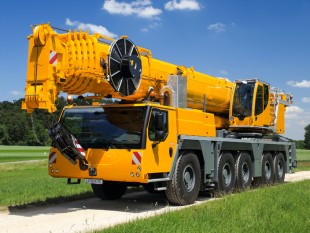 The telescopic boom of the LTM 1160-5.2 is 62 m long. With its 10.8 m to 19 m folding jib and additional telescopic boom extensions, the Liebherr crane can achieve hoist heights of up to 99 m and outreaches of up to 78 m

The new 160-tonne mobile crane LTM 1160-5.2 from Liebherr is the successor to the LTM 1160-5.1. The load capacity has been increased by around 20-25% whilst the telescopic boom has remained at the same length of 62 m. The vehicle width has been reduced from 3 m to 2.75 m which means that not only it is easier to drive on public roads but also considerably better on constricted sites. The superstructure of the new LTM 1160-5.2 is powered by the engine in the crane chassis using a mechanical shaft. This makes the new 5-axle vehicle the second crane model to feature the innovative single-engine drive concept which Liebherr first presented at the Bauma 2013 for the LTM 1300-6.2.

The six-part telescopic boom on the new LTM 1160-5.2 is 62 m long. With its 10.8 m to 19 m folding jib and additional telescopic boom extensions, the crane can achieve hoist heights of up to 99 m and outreaches of up to 78 m. The folding jib can be erected to an angle of 0°, 20° or 40°. An optional hydraulic adjustment facility for the folding jib is available, enabling it to luff under full load between 0° and 40°. For work in two-hook operation, a second hoist gear and a 2.9 m assembly jib and a rooster sheave is available.

The force is transferred to the crane axles via the 12-speed ZF-AS Tronic gears. The intarder, a zero wear hydrodynamic brake integrated in the gearbox, acts as a retarder. In addition a Telma eddy current brake is available as an option. Like almost all LTM mobile crane models today, the LTM 1160-5.2 features pneumatic disc brakes. The rear axles of the new 190 US-ton mobile crane have active electro-hydraulic steering depending on the vehicle speed. This increases the manoeuvrability of the vehicle and drastically reduces tyre wear. Five steering programmes can be selected conveniently at the touch of a button.