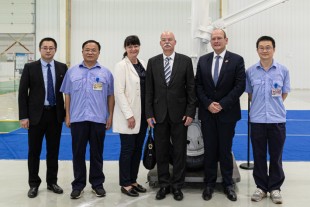 Hosted by Arndt Schoenemann, Chairman of LLA and Managing Director of Liebherr-Aerospace Lindenberg GmbH, and Yang Rujun, Chairman of LAMC as well as Li Ming, General Manager of LAMC, the delegation visited the facilities of LAMC and LLA. The ambassador showed great interest in the production capability of the joint venture and acknowledged the successful partnership of Liebherr and LAMC.