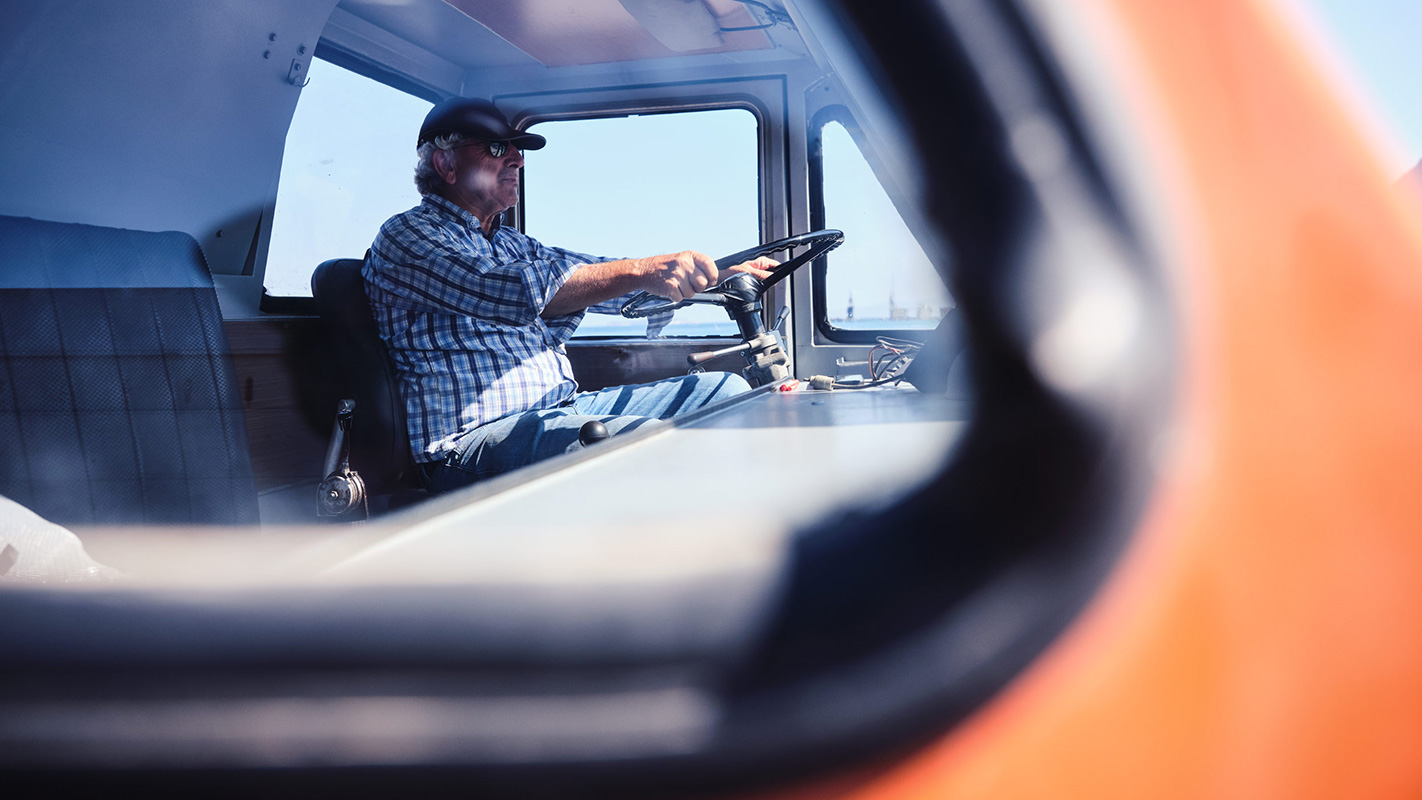 Kings of the island

Temples, altars, and shrines – the ancient Greeks are widely regarded as the master builders of their time. The lack of modern technical equipment did not stop them from erecting majestic buildings, which are still unparalleled today: the Acropolis in Athens, the Colossus of Rhodes and the Palace of Knossos on Crete are only three of the 18 UNESCO World Heritage Sites in Greece. Fast forward to the present day, thousands of years later, and a small Greek family business continues to uphold the very same culture of construction. 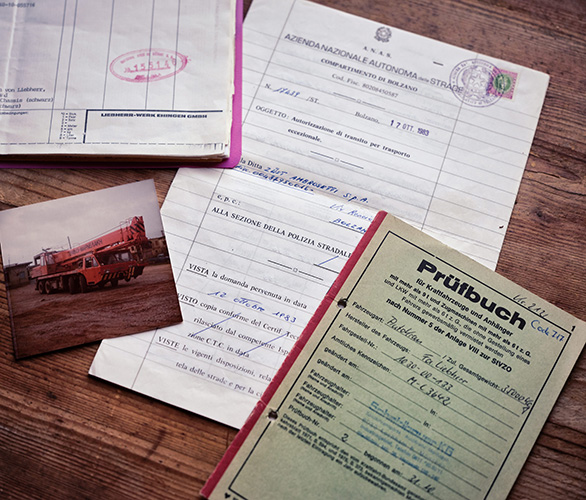 The first step is always the hardest

Brothers Manolis and Spiros Marnelakis set out to make their dream a reality. At the beginning, all they had was a small sum of start-up capital and an enormous vision for the future: they hoped to become the largest heavy lifting company in Crete. Sceptics abounded, but the brothers were firmly convinced of their plan.

"That's insane," Manolis Marnelakis was told when he announced his plan to bring a used Liebherr crane to Crete some 35 years ago. The critics and naysayers, however, were the least of his problems: how was he going to transport this machinery, which weighed several tonnes, from Ehingen in Germany to the Greek island? Manolis wasted no time and hired a driver who normally specialised in transporting refrigerated goods. Together, they transported the crane more than 2,600 kilometres to Crete.

This arduous journey created a strong bond between Manolis and his driver, Georgos. They are still good friends today, and often meet to reminisce about their nerve-racking odyssey over a cup of coffee. It involved driving the LT1030 to Munich and thence to Ancona on the Italian Adriatic coast, where they continued their journey by ferry. Manolis' brother Spiros coordinated the journey and took delivery of the crane at Souda port. Compared to the first part of the trip, the last few kilometres to the company headquarters in Chania, Crete, were child's play for everyone involved. 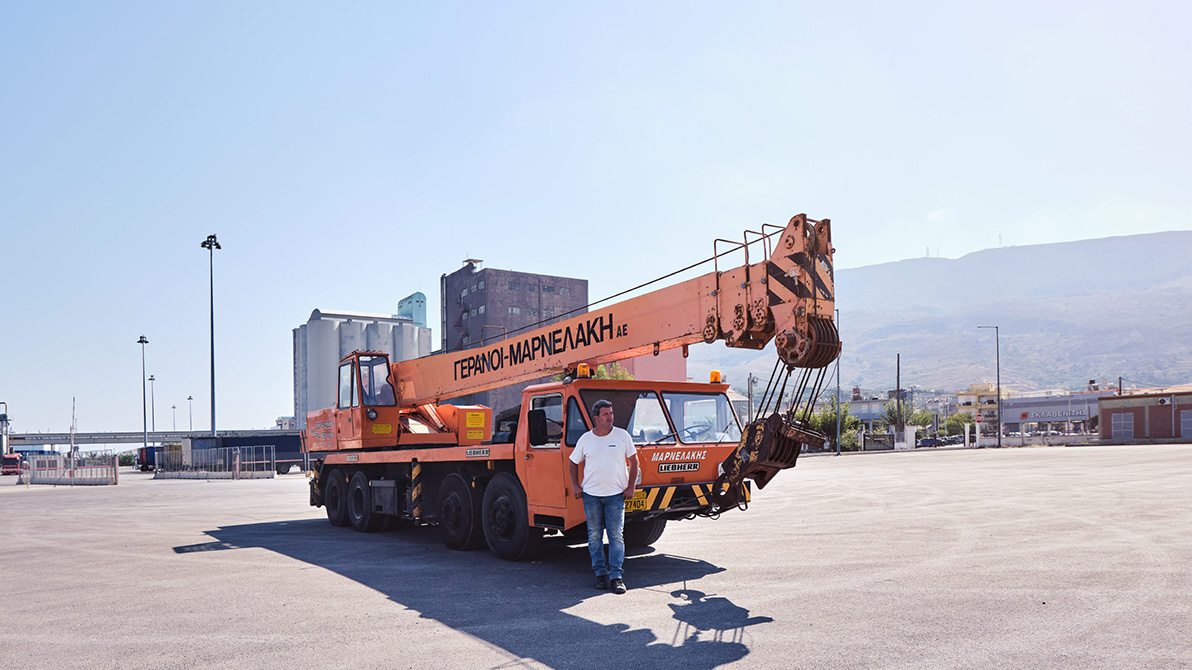 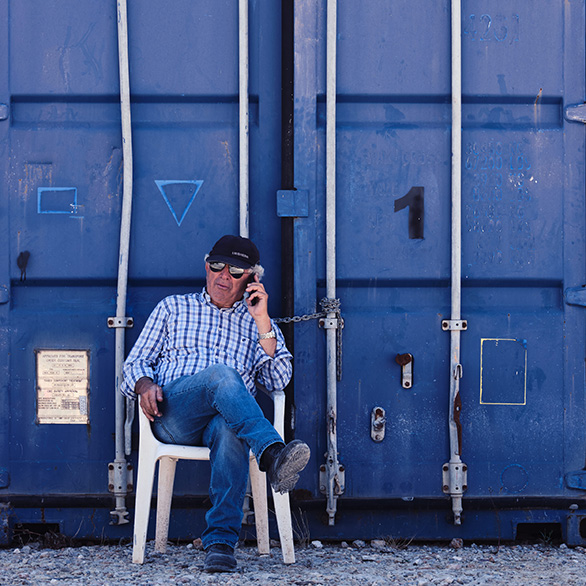 After their exhausting journey, there was no happy ending awaiting the men back home in Crete – not at first. No one on the island had ever seen such an enormous machine before, and it took some time before the brothers received any actual orders. Spiros recalls: "People asked me what I was planning to do with this behemoth". Undeterred, he replied to the islanders: "I am going to use it to hoist up your houses and move them from place to place." This assertion was met with hearty laughter.

In reality, however, the brothers' business was slow to get off the ground; they simply lacked experience with the new crane. But once the news about the colossal machine had spread across the island, the orders started trickling in – and with them, the two men's expertise began to grow. Today, the company has five Liebherr telescopic mobile cranes and seven truck-mounted loading cranes and employs twelve people.

The brothers' phones rarely stop ringing. Their core business is servicing wind turbines on Crete, other islands, and the Greek mainland. The fleet is also involved in the expansion of the motorway network and used in the local port – often quite spontaneously. Sometimes only a few minutes elapse between picking up the phone and sending out the work crew. Manolis' sons Babis, Nikos and Theo are now also pitching in with the family business – they were practically born to work with cranes.

As the next generation entered the family business, so did a new crane: the LTM 1230-5.1. Spiros and his 14-year-old son Jorgis drove to Ehingen specially to select the company's new machine. The only problem was that, at the time, the LTM 1230-5.1 only existed on paper. Despite this, the Marnelakis brothers and their sons were soon convinced that this mobile crane was the ideal replacement for the LT 1030, which was getting on in years. 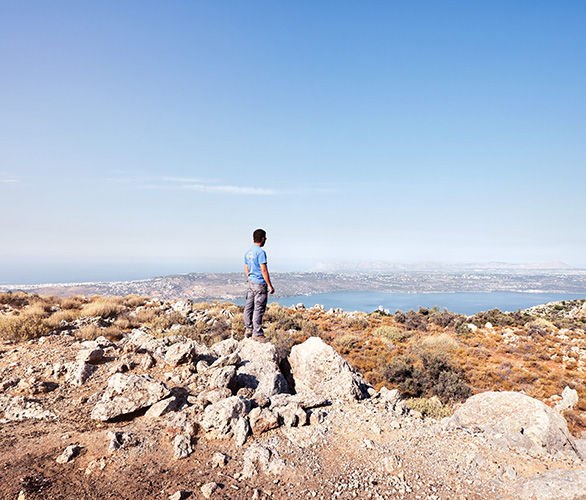 As one of the first models to be globally delivered, Liebherr shipped the LTM 1230-5.1 to Crete. Here extremely difficult conditions await the new crane in the family: narrow olive groves, steep vineyard slopes, deep ravines and rocky plateaus. The roads are narrow and precipitous, and many of the bridges are old and dilapidated. In the summer, the tourist trade makes driving on Crete's roads even more difficult – agility is essential here. "Its size, compactness and manoeuvrability make the LTM 1230-5.1 the perfect fit for our island." For Babis Marnelakis, however, one of many reasons why the family has once again opted for a Liebherr crane.

For youngest son and crane operator Nikos Marnelakis, the most important aspect of the LTM 1230-5.1 is its manoeuvrability: "Thanks to the five axles and differentials, I don't need to worry about where I'm going or what I'll find there. The VarioBase gives us total flexibility on the construction site as well." When was the first time Nikos was inside the cab of a crane? "I must have been six or seven years old," he recalls. This was the legendary LT1030 which his father Manolis had transported thousands of kilometres across Europe to Crete. 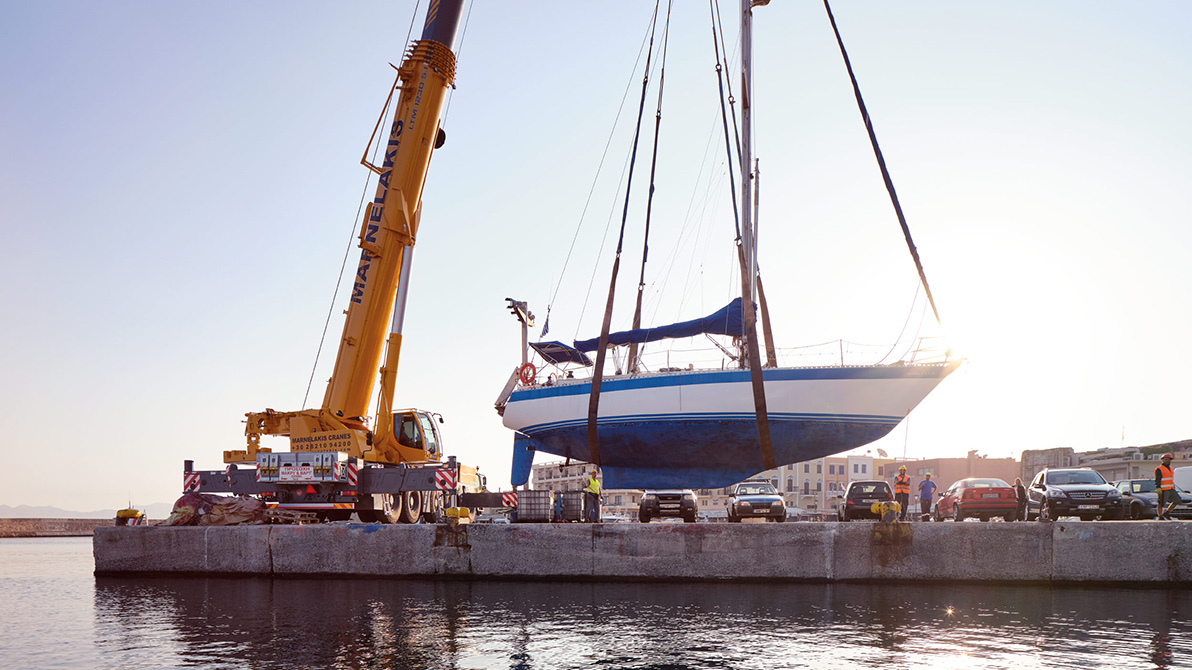 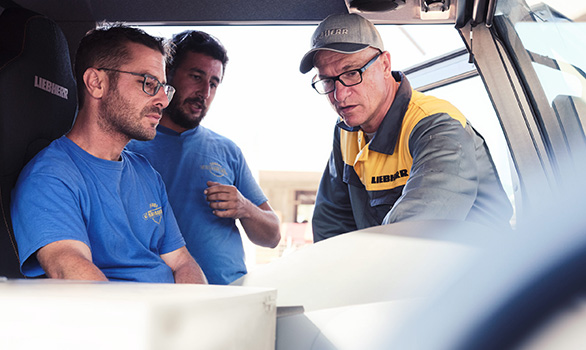 Liebherr service partner Yannis Liakopoulos has also been on board since more or less day one, and is practically part of the family. Yannis is on standby 24 hours a day and can reliably provide the company with any spare parts within 48 hours – island or no island! For Spiros Marnelakis, Liebherr's reliable service is one of the main factors behind its success. "Our relationship with Yannis goes beyond mere business. When he visits the island, we usually spend the evening at the taverna." "I never pass up this opportunity – after all, the culinary conditions here on Crete could not be more perfect", Yannis adds with a wink. Yannis Liakopoulos was also involved in the purchase of the LTM 1230-5.1. From the first "inspection" on paper in Ehingen to its final arrival at the port of Crete. One very important point is that all drivers have to attend a training course, regardless of whether the crane is new or used. A trainer came to Crete specifically to instruct Nikos and his brothers on every aspect of the new crane. 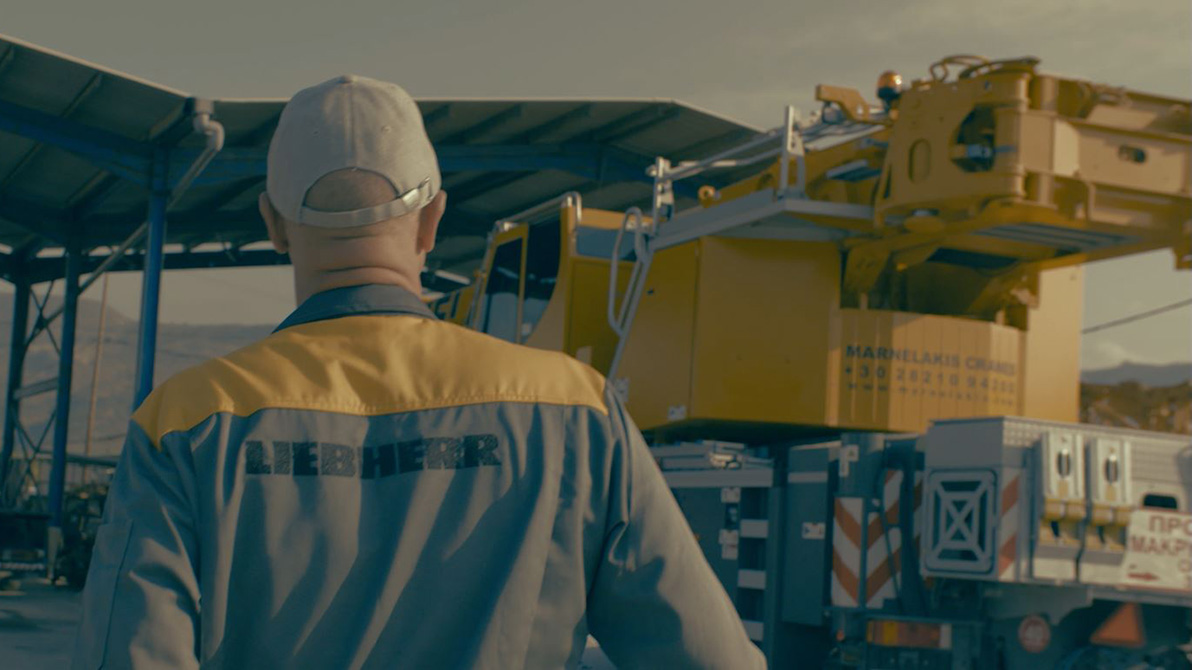 The secret to their success

Yannis is delighted to see the next generation relying on Liebherr too, and to see the fruit of all his hard work. When asked to reveal the secret to their success, the Marnelakis brothers take a moment to reflect. "People say: If Marnelakis can't do it, nobody can," Spiros tells us – not without a touch of pride

The range of products for mobile cranes at Liebherr includes more than 30 different types of telescopic and lattice boom cranes on wheeled and crawler chassis.

Mobile and crawler cranes from Liebherr

Journey into the eternal ice

A logistical and technical masterpiece: a mobile crane is delivered from Munich to its work site on the southernmost continent of the world – in individual parts.