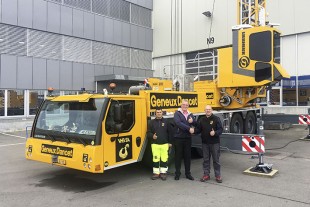 The mobile construction crane was commissioned at Liebherr-Baumaschinen AG in Reiden as part of an induction training programme for the new crane. Managing Director Philippe Porret travelled with crane driver Alexis Porret to the Swiss sales and service company to take delivery of the crane. “To date we have been very satisfied with our MKs and that is why we decided to buy another mobile construction crane from Liebherr”, says Philippe Porret.

The MK 88 Plus tackled its first job just a few days after the handover in the centre of Lausanne where a large supermarket was given a new interior courtyard. The constricted space available proved challenging even during the approach, making the MK 88 Plus the perfect crane for the job. It was then assembled next to the building in a matter of minutes, before effortlessly hoisting the packages of garden slabs, weighing up to 1200 kilogrammes over the supermarket building into its interior courtyard using its 45-metre jib.

Swiss crane contractor VHB SA is part of the 400-man Geneux Dancet SA Group, which was founded in 1854, since when it has made itself an excellent reputation, particularly through its roofing and facade work. The company has sites in Geneva, Echandens, Yverdon-les-Bains, Neuchâtel, Fribourg and Sion and, in addition to the MK 88 Plus, currently also has an MK 110 and an MK 140 as well as a Liebherr LTM 1050-31 mobile crane in its fleet.