SCHOLPP Kran & Transport GmbH from Stuttgart took delivery of a new Liebherr LTM 1350-6.1 mobile crane at the manufacturing plant in Ehingen in March 2016. The new mobile crane will replace an older crane of the same type. Managing Director Martin Scholpp explains: "We are so delighted with the LTM 1350-6.1 that we have bought the same model again, but now with new technologies such as VarioBase® and engine with Stage 4 emissions." 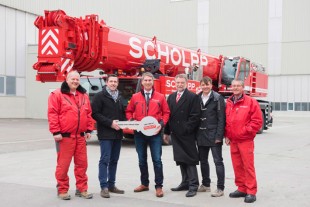 The new LTM 1350-6.1 was driven straight to the "Stuttgart 21" construction site after collection where twenty waste water pipes were being installed near the Central Station. Each pipe weighed 12 tonnes and their installation required a great deal of precision with radii between 15 and 42 metres. The LTM 1350-6.1 has been set up with 100 tonnes of ballast for this demand.

Stephan Burkhardt, Operations Director and Branch Manager at Stuttgart had nothing but praise for the Liebherr 6-axle machine: "The LTM 1350-6.1 is the perfect crane for us. Powerful and flexible with a 70-metre telescopic boom and the guying is simple to assemble using the self-assembly process. The customer for the first job of the new crane was desperate to have the LTM 1350-6.1. He even postponed the date of the job for a week to make sure he got it." 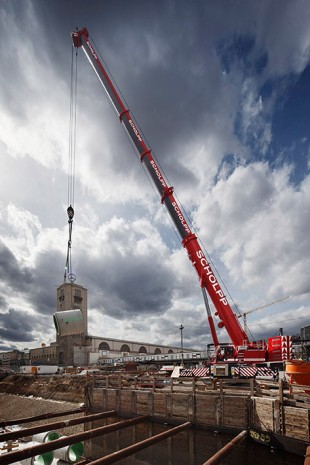 One of the main criteria for deciding to order Liebherr mobile cranes from Liebherr as far as SCHOLPP was concerned was the VarioBase® variable supporting base developed by Liebherr. All the cranes were ordered with this pioneering new system. Martin Scholpp explains: "We will not buy anything else. VarioBase® is the greatest innovation in mobile crane and safety technology of the last years."

SCHOLPP is celebrating its 60th anniversary this year. With a fleet of 75 vehicle units including fifty cranes, SCHOLPP is one of the leading providers in the Stuttgart area and in the Karlsruhe and Heilbronn regions. The company has a workforce of 120 and is currently training twelve new crane drivers. The company's in-house training of qualified personnel and its modern fleet provide the basis for SCHOLPP to provide "Tailor-made work with very heavy loads" every day.