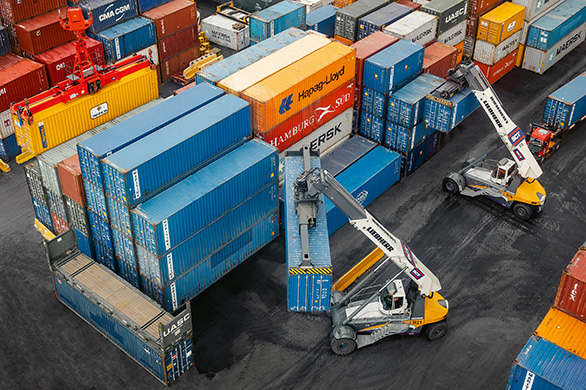 The global market for maritime material handling equipment was unstable throughout 2019. The division’s sales in each product group were consistent with general trends within the maritime industry. Liebherr maintained its position as the global market leader in mobile harbour cranes. There were also positive developments in the reachstacker, offshore and ship crane categories. The division gained market share in the floating cranes category. The newly constructed CBG 360, which was first used on- board a ship in May 2019, was a major driver for the division’s success. Growth was far above average for the Africa, Near and Middle East region compared to all of the other regions in the Maritime Cranes Division. There was also positive growth in Europe, especially in Germany, Russia, Ireland as well as in the Netherlands. Meanwhile, the division suffered a significant decline in sales in the Americas. However, this has been somewhat mitigated by two major orders from Central and South America for more than 50 reachstackers. A slight upward trend could be seen in Asia and Oceania.

The TCC 78000 has been optimised to enable next generation maritime cranes to be safely and cost-effectively transported and loaded.

One top achievement for the Maritime Cranes division last year was the installation of one of the world’s most powerful rail-mounted portal cranes at the Port of Rostock (Germany). With a hoisting capacity of 1,600 tonnes, the TCC 78000 offers unrivalled flexibility for handling large-dimension goods. The crane’s first task was to hoist a large component belonging to the HLC 295000 offshore crane, the most powerful crane Liebherr has ever built.

The division’s research efforts in 2019 focused on assistance systems in conjunction with (partially) autonomous cranes, which are automated to handle bulky materials and containers.