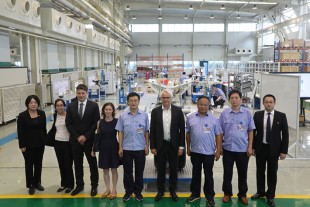 The Deputy German Ambassador to China, Johannes Regenbrecht (4th from right) with his delegation and representatives of LAMC, LLA as well as Liebherr.

The Deputy German Ambassador to China, Johannes Regenbrecht (4th from right) with his delegation and representatives of LAMC, LLA as well as Liebherr.

The Deputy Ambassador was very impressed and acknowledged the capabilities of the joint venture, the successful partnership of Liebherr and LAMC, which is living proof of the willingness of cooperation between the Chinese and German aircraft industry.

LLA supplies landing gears for two of COMAC’s aircraft programs: the ARJ21 and the C919. The LLA campus comprises an almost 54,000-square-foot state-of-the-art facility, equipped with two separate assembly lines – one for each aircraft program. Its new ERP system allows LLA to gain full logistics responsibility, streamlining planning, procurement, and inventory turnover. The company is committed to making strides toward strategic investments in the market.

The representatives of the joint venture as well as of LAMC and Liebherr addressed towards Mr. Regenbrecht the interest of LLA to be selected as a supplier for the new prestigious Chinese-Russian aircraft program CR929.