Spanish crane and heavy lift company Eurogrúas2000 has taken delivery of a new Liebherr LR1700-1.0 crawler crane. The new 700-tonne crane replaces a 600-tonne crawler crane that the Spanish company mainly used in the wind power sector. Eurogruas2000 chose the LR1700-1.0 because "the machine fits perfectly with the requirements of this market in terms of the weight and height of the current wind turbines", says Javier Sato, partner of Eurogrúas2000. The new investment goes hand in hand with the company's strategy of always keeping its machinery technically up-to-date.

Eurogrúas 2000 was looking for a crane that could meet the increasing demands of assembling modern wind turbines. Javier Sato says: "The LR 1700-1.0 is the ideal addition to our machine fleet. We have smaller narrow track cranes that are very well suited for certain types of wind power projects. As a larger model, we operate the Liebherr LR 1800-1.0 crawler crane. We needed a crane to fill the gap between 600- and 800-tonne cranes." The most important criteria in Eurogrúas 2000's decision for the LR 1700-1.0 were the Liebherr crawler crane's lifting capacity and boom length, as well as its innovative technology and compact design. 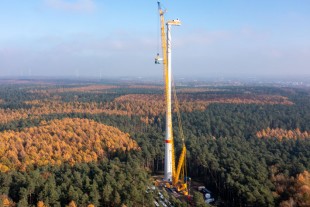 From the manufacturing plant directly to the wind farm

The Liebherr LR 1700-1.0 from Eurogrúas 2000, the first in Spain of this new model, went directly from the mobile crane factory in Ehingen to different wind farms spread across Germany, the first of which was located near Düsseldorf. There, the crane was responsible for the assembly of 20 wind turbines with a hub height of 161 metres and unit weights of up to 86 tonnes. "The fact that a company like Eurogrúas 2000 is awarded an international project of this kind, which involves working beyond the borders of its own country, is proof of the trust and recognition shown to us by a customer with whom we have had a business relationship for years and with whom we have already carried out other national and international projects. It is also confidence in the right choice of crane", reports Sato.

"When our client learned about the purchase of the Liebherr LR 1700-1.0 700-tonner, we jointly concluded that this was the right model for the job, as these are very specialised wind turbines that require certain performance specifications," Sato continues. 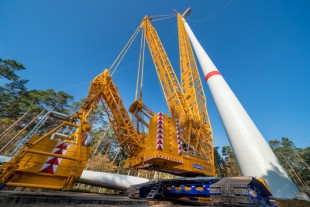 Eurogrúas 2000 relies on Liebherr as one of its flagship brands

Liebherr's LR 1700-1.0 combines the advantages of the economical transport of 600-tonne class crawler cranes with the performance of 750-tonne class lattice boom cranes and all the innovations of Liebherr's crawler crane developments in recent years. The successor model to the LR 1600/2 is based on its 600-tonne predecessor and has similar dimensions. The key to the higher performance of the new 700-tonne crane is the new base machine, which offers 10 to 15 percent more lifting capacity. In addition, the 3.5-metre wide H-lattice sections in the lower section of the main boom significantly improve the lateral stability of the entire system.

The Eurogrúas Group has relied on Liebherr cranes for years, as they offer state-of-the-art technology and excellent performance data for both industrial and wind power applications. The speed, efficiency and quality of Liebherr Ibérica's after-sales service are also major strengths that have led Eurogrúas to make Liebherr one of its flagship brands. The Eurogrúas Group has a fleet of 130 cranes, of which 113 units are from Liebherr.