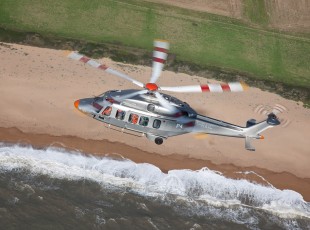 Liebherr-Aerospace supplies several major systems and components for the AW189, including the complete landing gear system and the environmental control system. The latest member of AgustaWestland’s civil rotorcraft family obtained its EASA certification in early 2014.

All of Liebherr’s AW189 systems and components were specially designed for the aircraft’s high operational requirements in missions such as long-range off-shore transport or search and rescue. The landing gear system, which is developed, manufactured and tested by Liebherr-Aerospace Lindenberg GmbH, Lindenberg (Germany), stands out for its particularly high crash-worthiness. The special shock absorber system ensures that the energy absorption is sufficient when the aircraft flies at a very high vertical landing velocity. This function is also important for landings on ships or with skis.

The environmental control system, which is based on vapor cycle technology, is developed, manufactured and tested by Liebherr-Aerospace Toulouse SAS, Toulouse (France). The compressors installed in the engine compartment power a two-zone cabin and cockpit air cooling system. In cold conditions, a heating system fed by bleed air provides passengers with warm air. In addition, Liebherr supplies the AW189 cabin and cockpit air distribution including ducts, valves, fans, diffusers and gaspers.