05/01/2014 190 tonne truss on the hook. Felbermayr is building a hangar at Schwechat Airport using Liebherr machines

The Felbermayr Group erected the steel skeleton for a new hangar at Schwechat Airport in Vienna using five Liebherr mobile cranes. The heaviest single component weighed in at 190 tonnes - a gigantic truss some 100 metres in length. 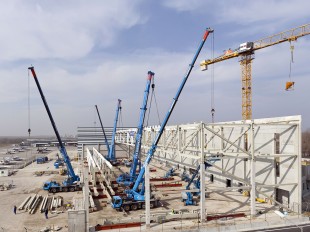 A new maintenance building for business jets is currently being built at Schwechat Airport located in the east of Vienna. The work on the massive skeleton for the building was completed by Austrian crane and heavy load contractor Felbermayr. Five Liebherr mobile cranes erected the 100 metre construction working in a team. The main roles in the work were carried out by an LTM 1400-7.1 and an LTM 1350-6.1. In a tandem hoist these two mobile cranes raised the 101 metre long and 190-tonne truss for the hangar building. The three smaller Liebherr mobile cranes were used to position and install the cross and connecting elements. A total of 800 tonnes of steel were used to form the skeleton for the future hangar.

Felbermayr currently has a workforce of around 2,800. The wide range of services of the Wels-based company includes transport, lifting gear hoisting technology and construction together with waste disposal. The Crane Division is one of the company's main areas of business and operates around 400 mobile cranes and 35 crawler cranes throughout Europe. The majority of this impressive fleet comes from the Liebherr crane plants in Ehingen and Nenzing.

Over the last two decades Felbermayr and its blue-liveried machines have continuously been expanding eastwards. It has subsidiaries in many countries throughout Eastern Eu-rope. The company has seven outlets in Romania alone. The new Liebherr LR 11000 crawler crane is currently working in a refinery not far from the capital Bucharest on the installation of a 300-tonne reactor. At almost the same time as its order for the brand new 1000-tonne crane Felbermayr also placed orders for three large LR 1750 crawler cranes.