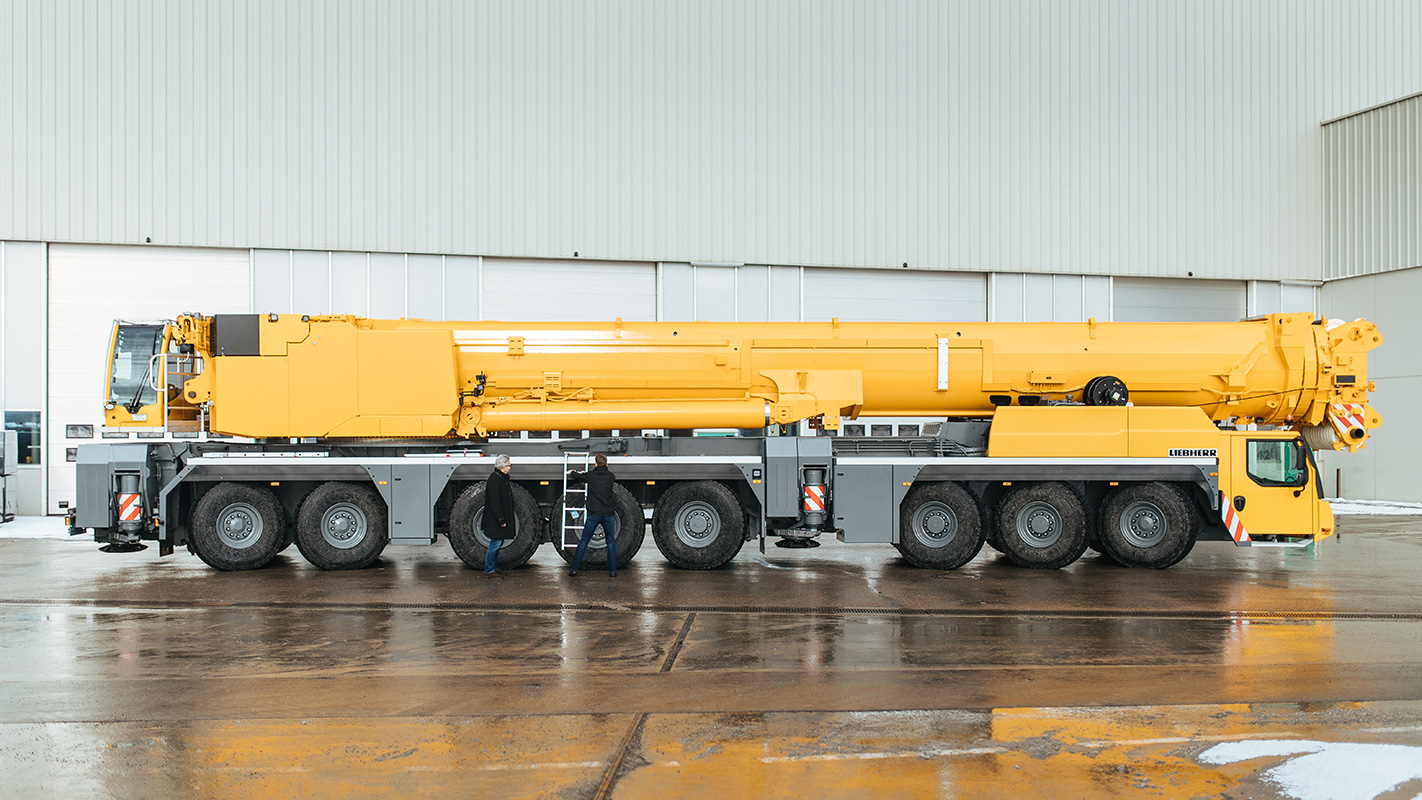 Eight axles, a 12-tonne axle load and 54- and 80-metre telescopic booms: at Bauma, Liebherr is showcasing its prototype LTM 1650-8.1, a new generation of powerful mobile crane. It took three and a half years of tinkering in Ehingen to develop the pioneering innovations that made this a reality.

Given their size, it’s tough to keep new large crane models under wraps before they make their world premiere.

Into the future on eight axles

Ehingen-made innovations are the source of constant amazement at Bauma, even if they have been an open secret for industry insiders for some time. ‘Given their size, it’s tough to keep new large crane models under wraps before they make their world premiere’, says Josef Schick, Head of Technical Testing at the Liebherr plant in Ehingen. If you visit the factory of the world’s leading manufacturer of mobile and crawler cranes, this is the first thing you’ll notice as you approach the plant. A whole host of huge yellow and grey lattice and boom shapes can easily be seen stretching across the sky. They seem to beckon to onlookers, saying: ‘Look here. This is the future of crane technology!’

As Josef Schick recalls, the nosy parkers from the technology blogs did not need a second invitation. Since last year, they have repeatedly been spotted on the factory premises, trying to sneak a glimpse from afar of the latest giant of a mobile crane from Liebherr. Those in the know have long suspected what Liebherr’s engineering and development department was up to – namely, a new eight-axle mobile crane with an unprecedented amount of power. 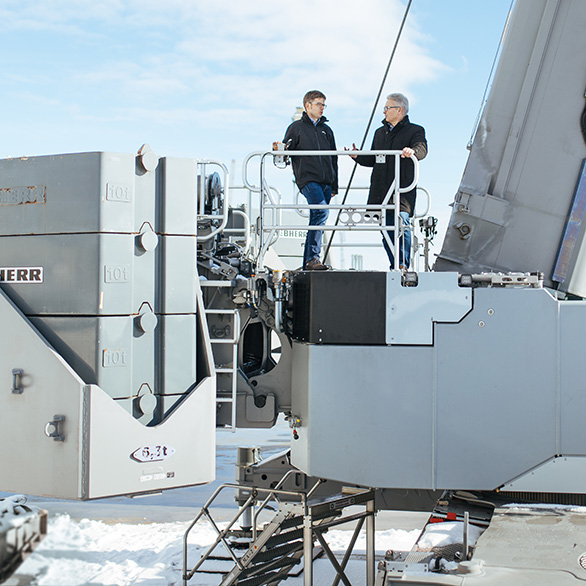 At Bauma, the crane is now celebrating its official worldwide premiere: the LTM 1650-8.1 featuring two telescopic 54- and 80-metre booms. It is earmarked to succeed the LTM 1500-8.1 which has sold 600 units and is the best-selling large crane of all time. ‘Those are giant boots to fill’, says Bernd Boos, Head of Construction at Liebherr in Ehingen.

Three and a half years ago, the development and testing team of Bernd Boos, Josef Schick and other lead developers launched this ambitious project. ‘Our goal was to achieve maximum performance on eight axles, with optimum flexibility and some notable increases in load-carrying performance compared to its predecessor’, says Bernd Boos, summing up the size of the challenge facing the constructors. To achieve this as quickly, efficiently and reliably as possible, Liebherr employed ‘simultaneous engineering’ right from the start. This meant integrating everyone involved in the development process as comprehensively and early as possible. ‘Everyone who needed to be involved in the project was there from the beginning’, says Bernd Boos, ‘from product management to purchasing, sales, construction, testing and quality control’. Depending on what stage the project was at, the size of the team would vary from five to 100 Liebherr experts.

‘Every step in the project was exciting. Each one brought new challenges and called for genuinely innovative solutions’, says Bernd Boos. ‘In a project like this, theory and practice go hand in hand. As engineers, there were times when we had to don the blue overalls and work gloves to experience aspects of the construction work and any assembly hitches ‘live’ on the crane itself’, he says, before adding with a wink: ‘And I’m sure I grew a few grey hairs in the process.’ 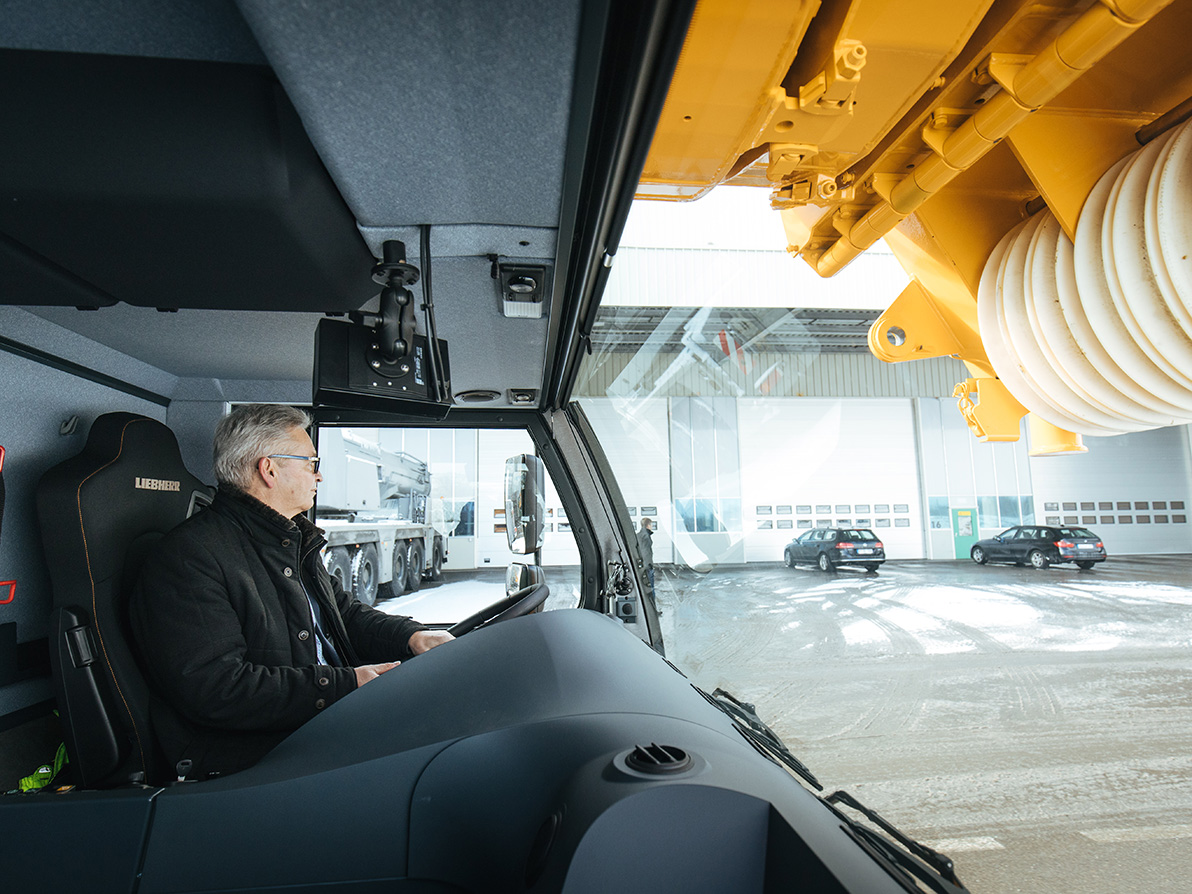 Both this attention to detail, and the elegant streaks of grey have obviously paid off: the LTM 1650-8.1 will be made into a complete series with some pioneering new technology. The prototype constructed in Munich drives with a 12-tonne axle load including its telescopic boom and front outrigger. The rear support unit plus sliding outrigger posts can be attached using a throw and quick-release couplings. The whole process only takes 20 minutes. For simpler tasks, according to Josef Schick, the crane’s basic hardware can be set up in about an hour without the need for an auxiliary crane.

The LTM 1650-8.1 has a modular design. Customers can choose between 54-metre and 80-metre versions. If they need both sizes, it’s a simple matter of swapping the telescopic part 3 and pulley head with the telescopic parts 3 and 5. This gives the crane more flexibility in terms of the tasks it can perform. In addition, the crane also boasts between 15 and 20% more load-carrying power – depending on whether or not the setup has an anchored telescopic boom.

The various lattice jibs showcase a high level of engineering expertise in crane construction. ‘Our goal was maximum efficiency for a variety of different applications’, explains Bernd Boos. Thus, the telescopic boom – regardless of whether the 54-metre or 80-metre version is being used – plus a fixed lattice jib ranging from 6 to 62 metres, can be extended quickly and easily. In addition, the luffing lattice jibs offer maximum height reach, load-bearing and performance over their length of 21 to 91 metres.

One of Bernd Boos’ and Josef Schick’s tasks was to constantly sound out the prototypes of the mobile crane on the factory premises. With 505 kW/687 HP and 3,160 Nm of torque, the eight-cylinder Liebherr diesel engine nonchalantly starts up the huge eight-axle vehicle. ‘The engine meets Stage V emissions standards and can be adapted to meet the standards of countries outside Europe, e.g. Tier 4f in the USA or Stage IIIA for Low-Regulated Countries’, says Josef Schick. 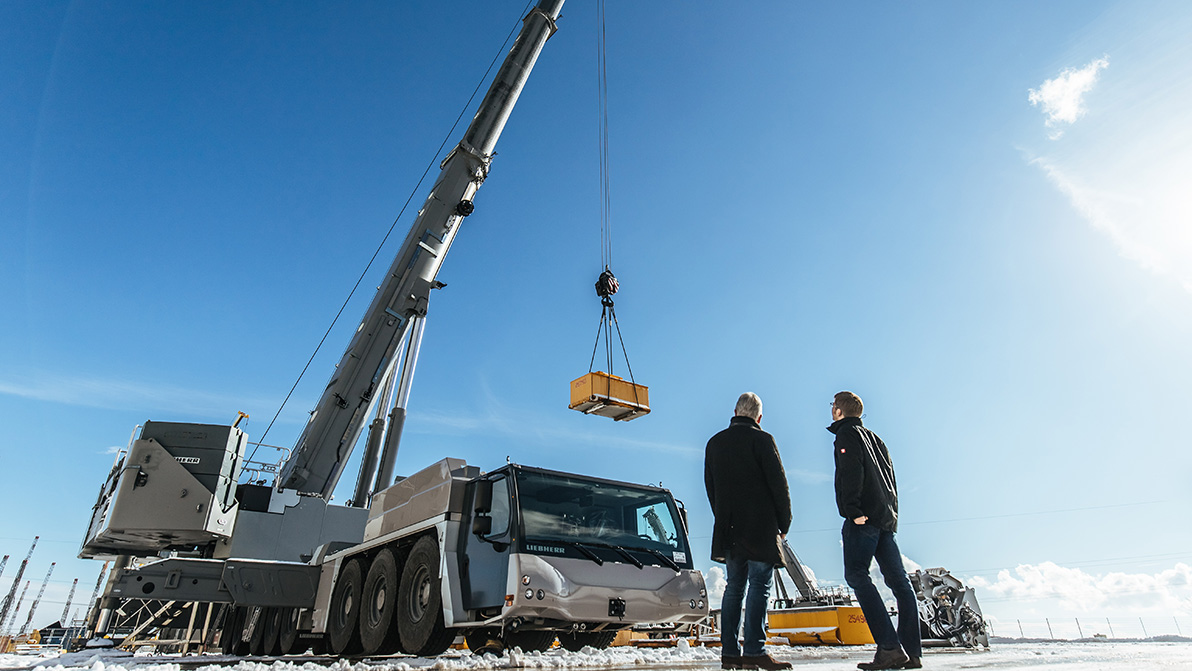 Our goal was to achieve maximum performance on eight axles, with optimum flexibility and some notable increases in load-carrying performance compared to its predecessor.

ZF’s ‘Traxon Torque’ 12-gear transmission provides agile handling and outstanding manoeuvrability, as does the fact that all eight axles can be steered. ‘The torque converter allows the vehicle to taxi

and approach adeptly’, explains Josef Schick before doing a couple of extra loops. The mechanically steered axles 1-4 and electro-hydraulically steered axles 5-8 enable five different steering modes to be used. The ‘All-Wheel Drive’ mode allows the crane to achieve the tightest turns whilst the ‘Crab Steering’ mode even allows it to move sideways. ‘Maximum driving performance and mobility is a must on the construction site’, says Josef Schick. Drive settings now include an ECO mode alongside the existing ‘Power mode’. This saves fuel by reducing engine revs whilst also minimising noise.

Bernd Boos and Josef Schick park the mobile crane back in the testing hall and contemplate their ‘handiwork’. One thing they can definitely agree on: ‘The excellent collaboration with other Liebherr divisions has contributed greatly to this achievement. We are in a position to make better products because we can adapt our components to meet the requirements of the crane perfectly, rather than buying all of them off the peg’, says Bernd Boos.

Nevertheless, after its worldwide premiere at Bauma the Liebherr developers will not be resting on their laurels. ‘Now it’s full steam ahead as we’ve got a whole series to test’, says Josef Schick, full of anticipation. In fact, there’s always another mobile crane in the pipeline. ‘We’ve got some really exciting ideas for our 100-tonne class’, Bernd Boos confides. ‘There’s never a dull moment here.’ We’re sure the nosy parkers from the blogs will be glad to hear it.

News about the mobile and crawler cranes and customer service for our machines directly on your smartphone.

Get the free-of-charge service via Whatsapp here