Paris is growing. Massively. In 2016 the French capital and the surrounding départements were merged to form the "Metropole du Grand Paris" administrative unit. A total of 10 million people live in this enormous metropolis and there are plans to modernise and massively extend its infrastructure over the next few decades. 200 kilometres of underground railway including 68 new stations are planned, some of which are already under construction. The order books of crane contractors are filling rapidly.

"Like all crane contractors in the Paris area, we are expecting a healthy rate of orders over the next few years." This is the optimistic forecast made by Patrick Meublat, Technical Director for the Crane Business at Mediaco in Thieux, a branch office of the company in the north-east of the capital city. "The jobs for our Liebherr cranes around Paris over the next few years will be dominated by assembling and dismantling tunnel drilling machines and hoisting railway and road bridges." 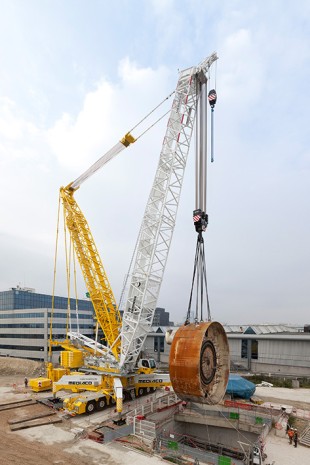 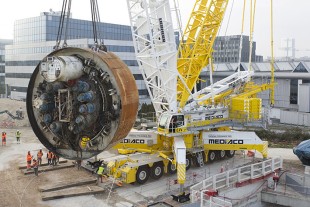 The company's recent purchase of a Liebherr LG 1750 lattice boom crane was a step taken by Mediaco to prepare itself for this future. The new mobile crane has already completed one or two hoists of a tunnel drilling machine for the "Grand Paris" infrastructure project over the last few months. Maximum load cases of around 300 tonnes are a matter of course for the LG 1750. The crane is generally equipped in compact form with a 35 metre main boom and a derrick boom, packing sufficient power for these jobs on the growing underground railway construction sites in Paris.

From an urban planning point of view, the "Grand Paris" project is more than just a topic to talk about in the cafés. The next few years will see nothing less than the largest construction site in Europe being created along the River Seine. This enormous project will not only extend the metro but will also involve other urban infrastructure being upgraded and extended. The extension of the public transport network alone will cost 35 billion euros. The local transport system will be extended to include the most densely populated capital city in Europe (22,000 people per square kilometre) with the surrounding area. The growth in residential property will double at a rate of 70,000 new apartments per annum. 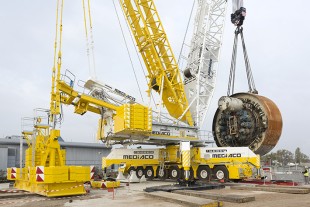 Machines from every division of Liebherr involved

The majority of the new metro routes are scheduled to be completed by 2030 but the project as a whole will last several decades. This means that French crane and construction contractors will have plenty to do. Machines from almost every division of the Liebherr Group of Companies are working on the "Grand Paris" project. Machines from the Special Foundations, Mixing Technology and Earthmoving Divisions as well as Liebherr construction, mobile and crawler cranes will be permanent fixtures on sites around the French capital for the next few decades.

Mediaco alone has 25 Liebherr cranes operating around the Paris area. With over 600 machines and 60 branches, the company based in Marseille is one of the largest crane contractors in France.

You can find the video of the new LG 1750 operated by Mediaco at the "Grand Paris" mega project here.