Liebherr World Table Tennis Championships in Düsseldorf: A highlight in the 2017 sporting calender

In the early summer the sports world looks to Düsseldorf: The Liebherr World Table Tennis Championships, which takes place from 29 May to 5 June, is one of the fantastic highlights of the 2017 sporting year. With a good 700 players from over 130 countries, a total of 4,000 accredited individuals, 100 table tennis tables in several halls of Messe Düsseldorf, and a center court for 8,000 spectators, the singles, doubles, and mixed doubles matches make up the largest indoor sports event in the world.

The interest in the Liebherr World Table Tennis Championships is just as huge: The event organizers are expecting a total of 55,000 visitors over the 8-day event. Over 500 media representatives are also expected and over 100 TV stations will report live to their home countries. Over half a billion fans around the world will follow the competition on TVs and the big screen. In China alone an average of over 200 million table tennis fans will tune into the matches. The organizers are once again expecting user numbers in the mid double-digit million range for the social media channels.

Liebherr is actively involved in the World Championships in Düsseldorf. Similar to the team world championships of 2006 in Bremen and 2012 in Dortmund, Liebherr is the title sponsor of the tournament and also team sponsor for the national teams of Austria and host Germany.

Liebherr has been supporting the sport of table tennis for over 25 years. Starting with the Bundesliga team TTF Liebherr Ochsenhausen, the Liebherr Group has continuously expanded its commitment. On an international level Liebherr was several times the title sponsor of world and European championships, as well as other big tournaments. In Germany Liebherr is regularly a partner of the Bundesliga final and the final round of the cup.

The long-term commitment by Liebherr is primarily due to the fascination of the sport of table tennis. For instance, the fastest racket sport in the world is characterized by dynamics, precision, and strategic intelligence, and fits in superbly with the corporate culture. "Table tennis is a friendly, healthy sport for all age groups – free of doping and scandals, but rather an epitome of fairness", is how Andreas Böhm, Member of the Executive Board of Liebherr-International AG, describes the importance of the sponsoring. 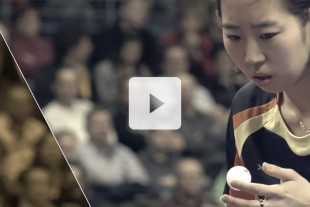