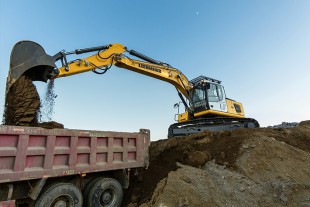 The line-up of new Liebherr machines on display at Conexpo 2017 includes a series of earthmoving machines specially designed for lower regulated markets.

Representing the product range of crawler excavators are the R 920 and the R 924 with service weights between 46,300 and 54,230 lbs. respectively. These machines are Stage IIIA / Tier 3 / Guo III compliant and are equipped with an energy-saving six-cylinder engine which is the largest fuel tank in this market segment. The new series of crawler excavators operate at a very high level of efficiency in all operating conditions.

From its wheel loader product range for lower-regulated markets, Liebherr displays the L 550 which is one of the five models available in this product range. Due to its hydrostatic driveline, this machine is very fuel efficient; consuming up to 25 percent less fuel compared with conventional wheel loaders under the same conditions.

The Liebherr Conexpo Con/Agg 2017 press kit provides key information about the exhibits that are on display in Las Vegas as well as general information.