Out of love for technology

After almost 40 years, an HTM 602 truck mixer returns home to Liebherr to be restored for its twilight years. The idea is for this rare gem to greet customers and visitors and fuel their enthusiasm. 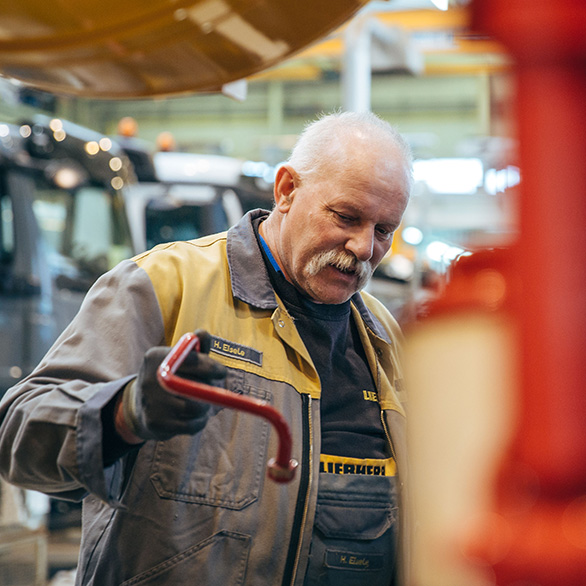 The engine coughs and splutters as if it had catarrh. "The air compressor," says Hans Eisele, sighing and turning the key to switch the ignition off again. He climbs out, uses the hydraulics to tilt the driver's cab forward, and takes a closer look at the engine, which is now exposed. "It's leaking a bit. Not surprising, given its age," he says, setting to work with a spanner. Hans Eisele is an old-school mechanic. He's been working for Liebherr in Bad Schussenried, where he normally spends his time fitting state-of-the-art concrete mixing trucks with mixer drums and conveyor belts, for 37 years. Today, however, the 62-year-old is dealing with the slightly leaky "old-timer", a 1977 Liebherr HTM 602 truck mixer.

For almost 40 years previously, this venerable vehicle had been in continuous service with Bétons Baatz in Luxembourg, where it made its rounds steadily and reliably. At some point, the company retired the vehicle, with its vintage Magirus undercarriage, and it started rusting away outside the depot. Liebherr bought the truck mixer back with the aim of returning it to its home in Swabia, restoring it and exhibiting it to customers and visitors as a reminder of the early days of the product range.

Getting an old vehicle like this going again is always a bit of an adventure.

"At first, you never know what will need doing – which places will just need filing, sanding, painting and lubricating, and which components will have to be completely replaced. Then, the question is whether it is still even possible to get hold of the original parts, and if so, where?" says Hans Eisele. For the leaking compressor, a suitable repair kit had to be specially obtained. Now, with all the parts ready to hand, Eisele can get to work with his spanner.

He is being helped by Peter Burkhart, who has come specially from Ulm, around 50 kilometres away, to see how the repairs to the vintage truck are going. When it comes to vintage vehicles, Burkhart really knows his stuff. He is a member of the board of the "Magirus IVECO Museum Ulm" association, and has been able to contribute sought-after components for the restoration of the vehicle from the museum's stocks. "You see plenty of tipper trucks that have been restored, but it is very rare to come across a vintage concrete mixer. So this is a real treasure. But our museum is only interested in fire engines," he explains to the mechanic, Hans Eisele. 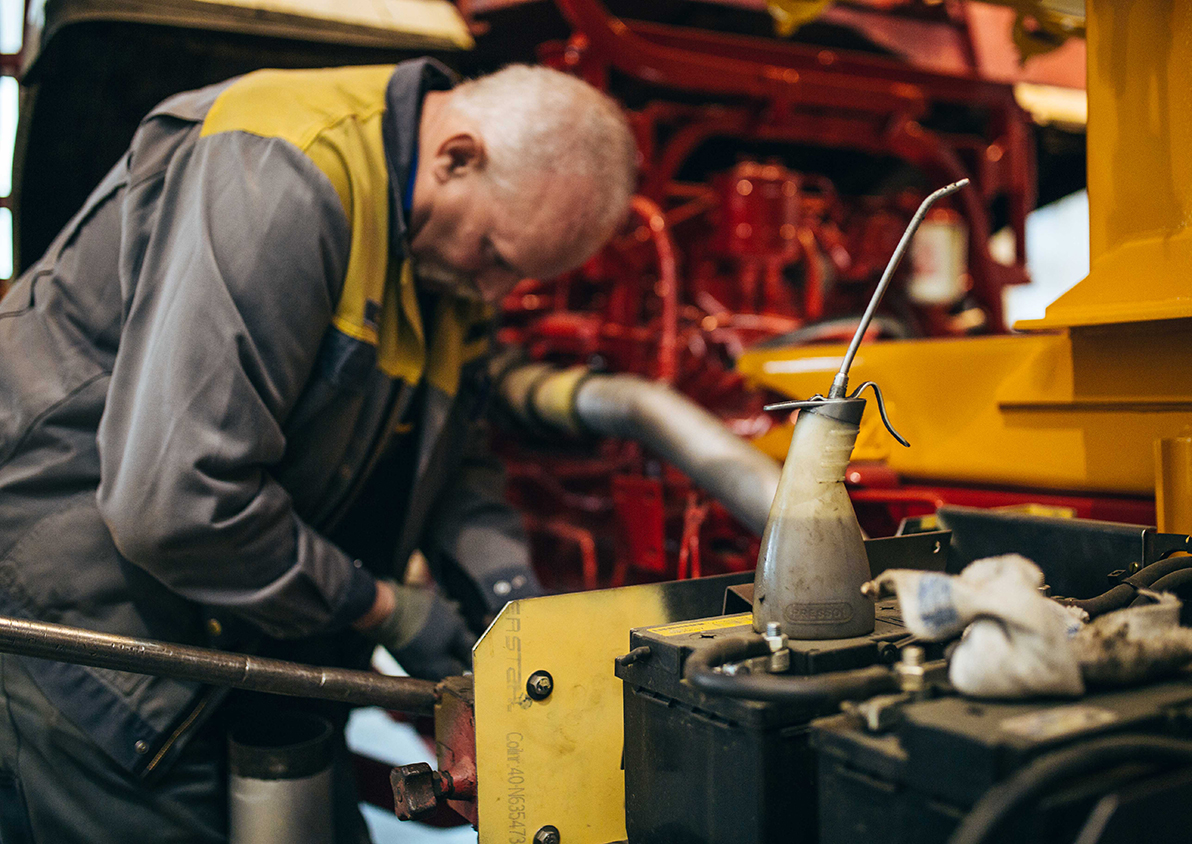 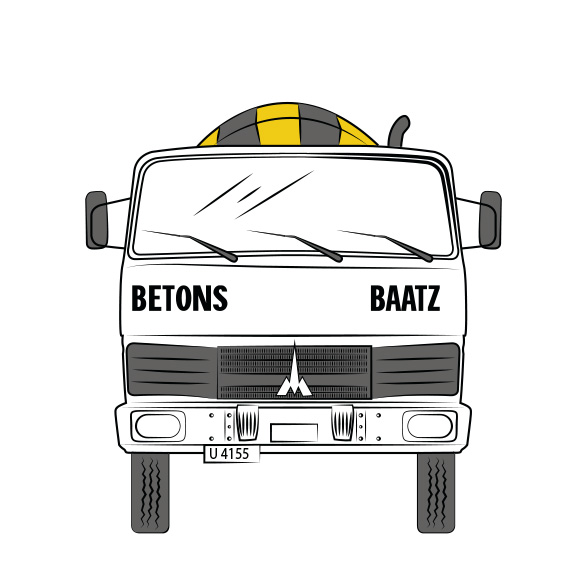 The Liebherr HTM 602 truck mixer began life in Luxembourg in 1977, as the pride of the Bétons Baatz company in Ingeldorf. "It was a great vehicle," recalls Jean-Paul Baatz, who was trained by Magirus vehicle technicians and later joined his parents' company. "There was just one thing that wasn't quite right back then. At that time, the mixer was still driven by a large crown gear on the front of the drum. On uneven ground, that sometimes gave rise to problems with the chassis warping." This was why Liebherr switched soon after that from crown gearing to planetary gearing. "But that makes our mixer even more unique." 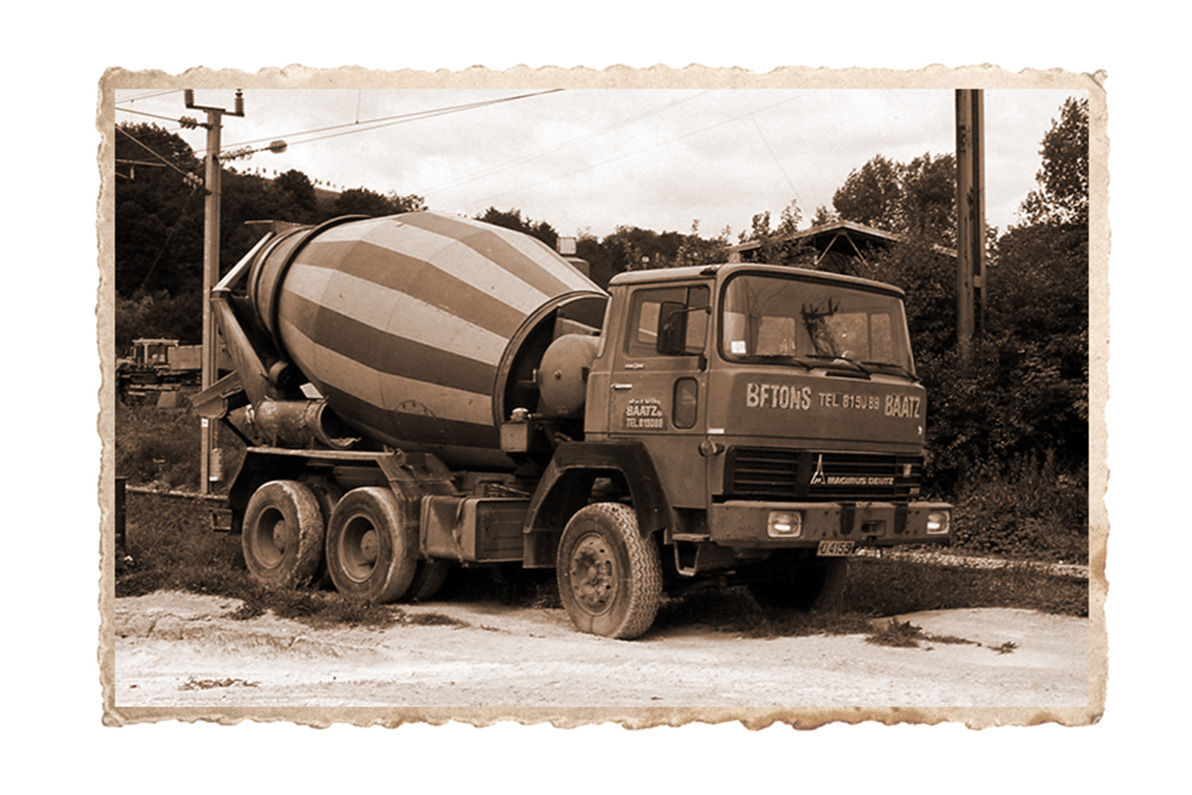 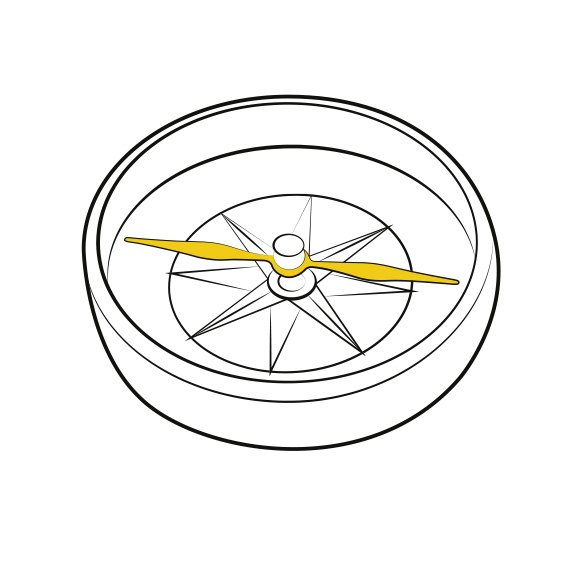 "A journalist friend of mine phoned me and told me about the vintage mixer truck," says Klaus Eckert, Head of Marketing at Liebherr-Mischtechnik in Bad Schussenried. "He came across the vehicle by chance at a depot in Luxembourg and recognised it straight away as a second-generation HTM 602 model." Meanwhile, the owners had taken the mixer out of service. The ravages of time were taking their toll on it. "But one turn of the key, and the vehicle sprang into life," says Eckert. It was for this reason that the team in Bad Schussenried decided to buy back the vintage mixer and turn it into an exhibition piece for the customer centre. "We quickly came to an agreement with the Luxembourg owners." 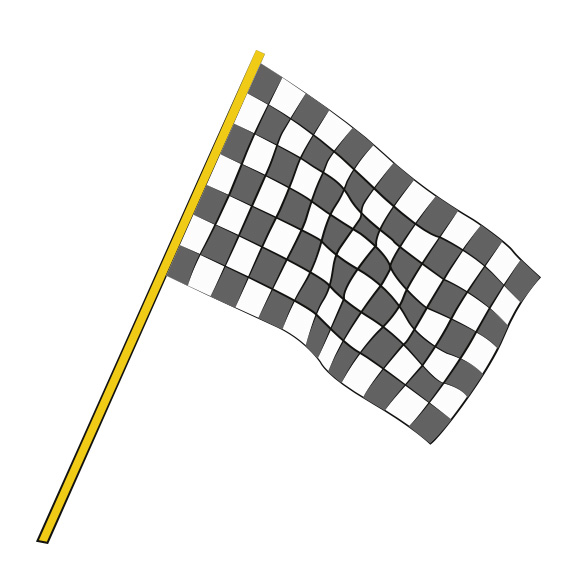 Following its "homecoming" to the factory in Bad Schussenried, the vintage mixer continued to start up brilliantly first time. Apart from that, however, almost 40 years of continuous service had left their mark. That meant all hands on deck for the engineers and mechanics.

Unless you love vintage vehicles and are prepared to embark on an adventure, you shouldn't even think about taking on a project of this kind.

The Liebherr mechanics had planned to use the winter months, which are traditionally a little quieter, to make their "darling" presentable again. However, full order books meant that routine production had to take priority during January and February. "The construction season gets underway in March, so our customers want to be optimally equipped for it. This meant that our old-timer had to wait: business before pleasure," says Eisele with a smile.

After 40 years, the HTM 602 is now taking its new place in the visitor centre. "It will be our starting point for factory tours," says Eckert. "And 'living' proof of how robust and long-lived Liebherr truck mixers can be. As our customers are perfectly well aware: it is reliability and long service life that keep their tills ringing."

We have Magirus vehicles covering the period from 1920 to 2012 here. They include some of the most beautiful fire engines in the world.

Help from the professionals

The engine comes to life, making the vehicle judder. The exhaust spits out a blue cloud into the storage depot. Peter Burkhart turns on two manual switches in the cockpit. Blue light circles through the semi-darkness, and the siren sounds through the old outstation of Ulm's Magirus IVECO Museum. The vintage trucks are currently distributed across five sites in and around Ulm. The new museum in nearby Münsingen is due to open in a few weeks. "This one here is one of the most beautiful fire engines in the world," declares Peter Burkhart proudly to visitors Hans Eisele and Klaus Eckert, describing the vehicle he has just started up. "A round-bonnet TLF 16 dating back to 1962. 125 HP with a 2,400-litre water tank," says the vintage vehicle expert. His visitors from Bad Schussenried are impressed. Then he swings down from the driver's cab and opens the lockers on the side of the fire engine. It is equipped exactly as it would be if it were about to rush off to a fire: There are oxygen tanks, an axe, hose reels, manifolds, a toolbox, spades and metal shears, all neatly arranged, and on the roof a two-part wooden ladder.

Here in the hall, visitors like Hans Eisele and Klaus Eckert are the exception rather than the rule. It tends to function more as an extra-large garage and workshop for vintage fans and tinkerers from the museum association. But this is exactly where Burkhart scores a hit with the two men, as they are on the lookout for more original parts to make the restoration of the vintage mixer as accurate as possible in every detail. "There is an incredible treasure trove of vintage trucks here," acknowledges Hans Eisele, amazed at how well-acquainted museum director Peter Burkhart is with all the details of the vehicles. 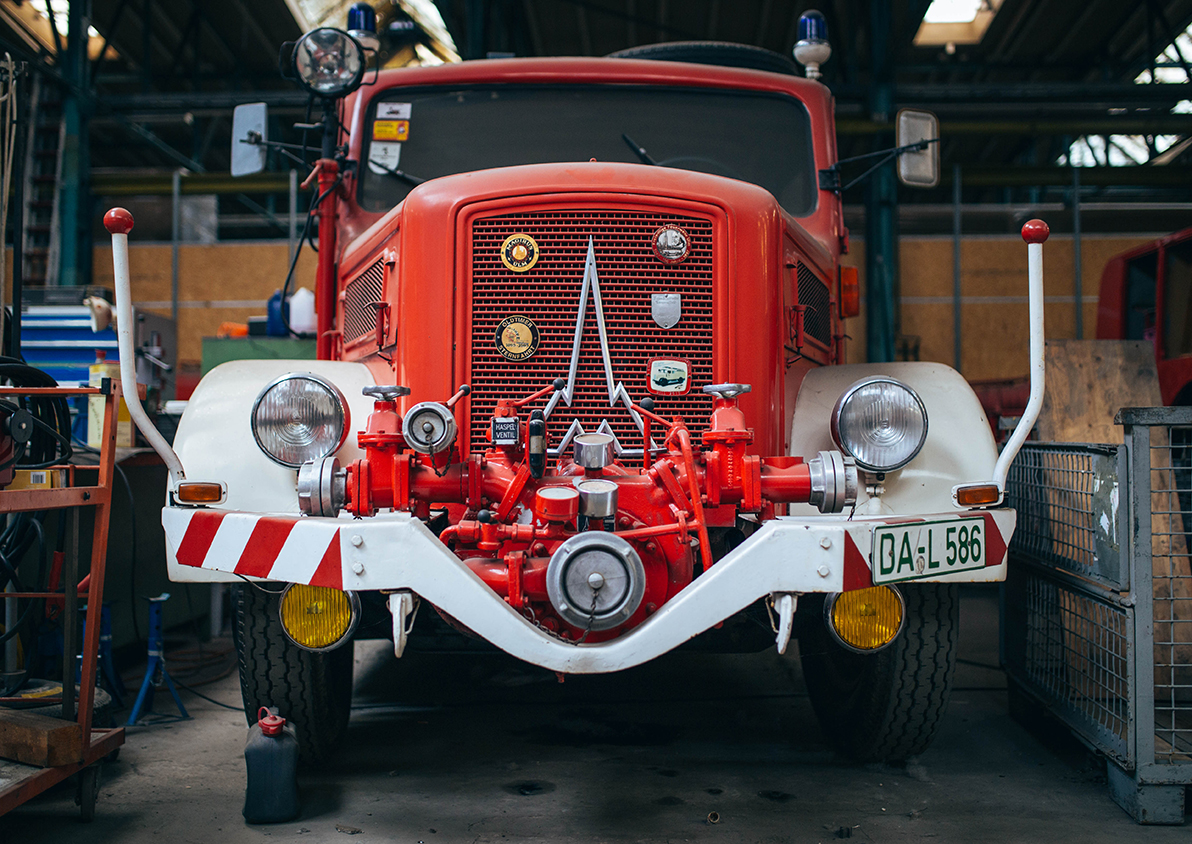 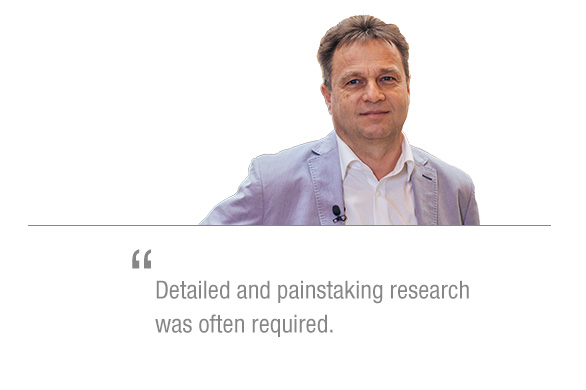 In this way, Klaus Eckert and Hans Eisele find their time in Ulm just flying past. But they will take away with them more than just a lot of good stories and anecdotes: they will also be taking a fire engine cab. An original Magirus part from the 1970s. It's as if it were made for the vintage mixer in Bad Schussenried. The old cab was very rusty and would have needed extensive panelling work, so the replacement cab from the fire engine offered an ideal solution.

The "new" vehicles are lined up in the assembly hall in Bad Schussenried. All the brands are represented here: Mercedes, MAN, Volvo, DAF, IVECO Scania, etc. For each model, there are truck bodies to match. Nowadays, mixer drums usually have a filling capacity of nine cubic metres, sometimes even 15 cubic metres, but this has not always been the case. "Previously, six cubic metres was the standard," recalls Klaus Eckert. As in the case of the vintage mixer. Rebuilding the ageing mixer drum was a real challenge. The Liebherr mechanics first had to completely dismantle the drum and the accessories for it and make an inventory of all the parts that were faulty or missing. "Painstaking research in the engineering office and in old manuals was required in order to track down all the part numbers,” says Eckert. In the archive, old drawings on microfilm were scanned and printed out. "Based on these, we then rebuilt the missing parts." 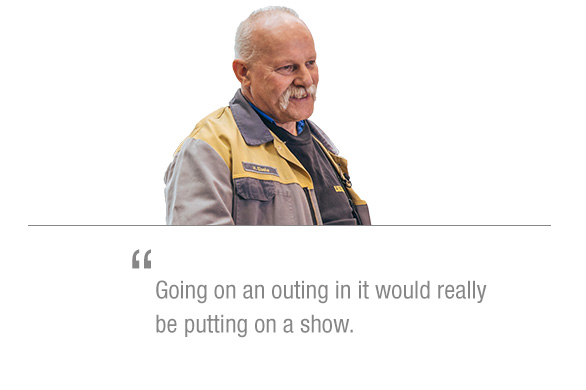 Peter Burkhart climbs into the restored antique cab with Hans Eisele. Inside, it looks anything but comfortable, compared to the modern-day high-tech monsters standing alongside it. "Not everything was worse in the old days," says Peter Burkhart. "Even though we had no steering-wheel adjustment or air-suspension seats, we enjoyed being out on the road in these vehicles". It is plain to see that it did not take long to return the HTM 602 to its technical design roots. Colleagues in the factory follow the final stages closely. "Going on an outing in it would really be putting on a show," says Hans Eisele. "When you are out on the road in an old timer like this, everybody's your friend," confirms Peter Burkhart. "People turn to look at you, smile and wave – most do, anyway."

Working methods in technical construction have changed in recent decades, but engineers’ enthusiasm for innovation remains the same today.

Liebherr truck mixers provide a wide range of variants and options. Thanks to the reliably high quality of our products, we guarantee economic concrete transport.