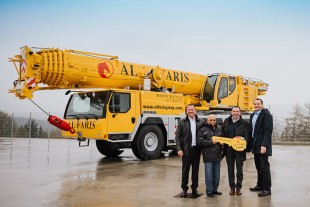 The new order includes 12 LTM 1230-5.1 models and one LTM 1500-8.1. The latter was officially handed over to Al Faris in February in Dubai, together with the first LTM 1230-5.1, which is also the very first of its kind in the Middle East. The LTM 1500-8.1 is now the twelfth Liebherr 500 tonne crane owned by the company, making it the largest fleet of LTM 1500-8.1 cranes in the Middle East. According to Mr Hillary Pinto, Managing Partner in the company, it is his “absolute favourite crane”.

In addition to the time-tested LR 1400/1 and LR 1600/2 crawler cranes, Al Faris also decided to purchase the new LR 1800-1.0. This Liebherr 800 tonne crawler crane is designed to be a particularly powerful industrial crane, but can also be fitted with special equipment to make it ideal for erecting the latest generation of wind turbines.

Al Faris is one of Liebherr’s largest customers in the world and currently has over 600 Liebherr cranes in its fleet. In the past two years alone, Al Faris has received around 60 mobile cranes from Liebherr. Al Faris Group based in Dubai, United Arab Emirates, was founded in 1992 and can now look back at 27 years of successful company history. Al Faris is the largest crane and transport vehicle rental company in the whole of the Middle East and one of the largest in the world. The core business of the group is mobile crane rental. Furthermore, Al Faris can supply a complete engineering and management package for heavy haulage and hoisting projects. The company has a workforce of over 3200 in six branches in the United Arab Emirates, three sites in Saudi Arabia and one outlet in Bahrain. Its current fleet includes over 2450 cranes, heavy haulage vehicles and other heavy equipment.

Some of the newly ordered cranes will be used for the company’s massive expansion plans in the MENA Region.