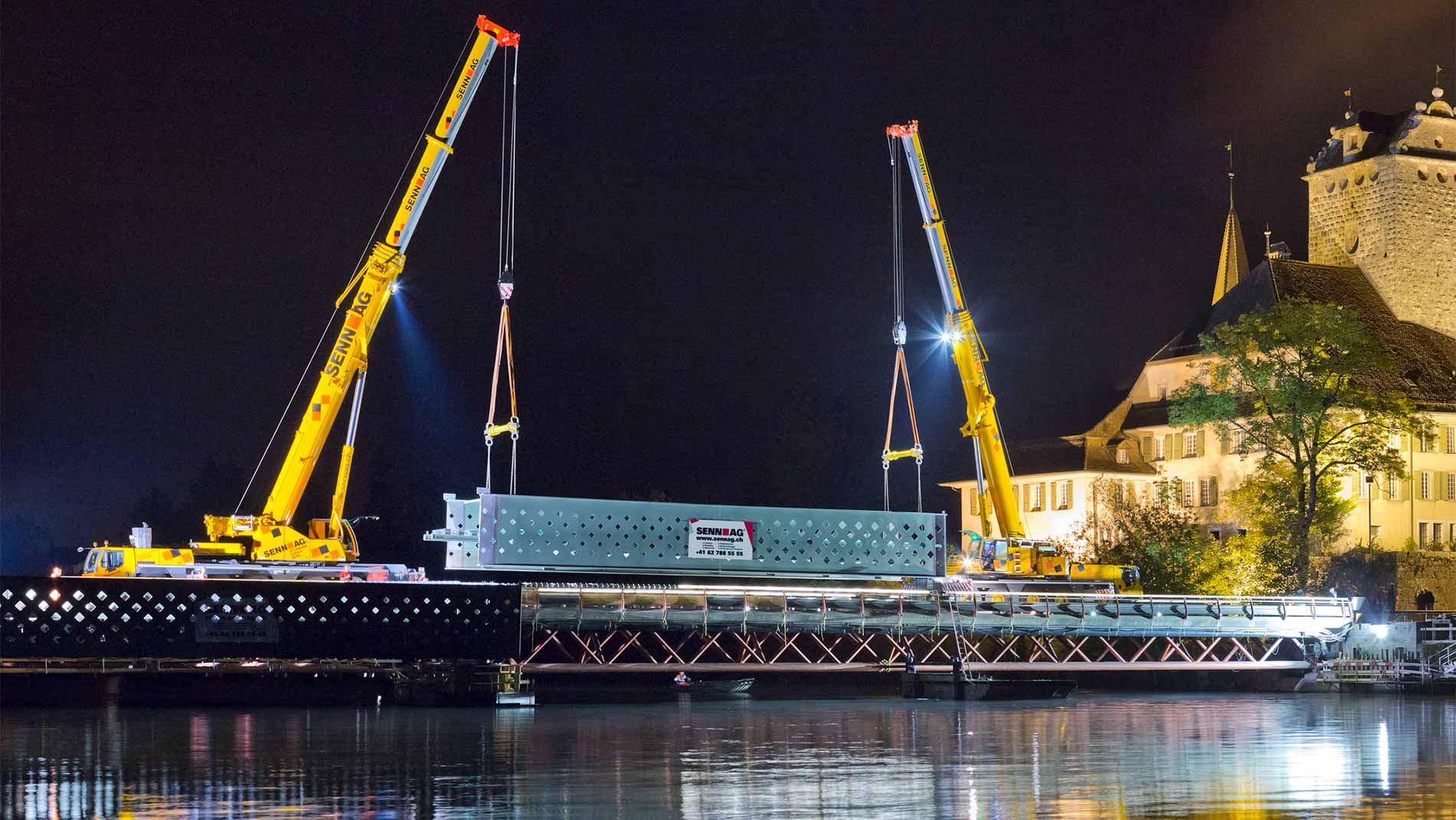 A 110-year old railway bridge has to be replaced in Aarwangen in Switzerland. For the bridge builders it would actually be a very comfortable job, dismantling the old structure and installing the new one from the neighbouring parallel bridge. However, at just seven metres wide, the bridge is too narrow for most mobile cranes with the required load capacity. 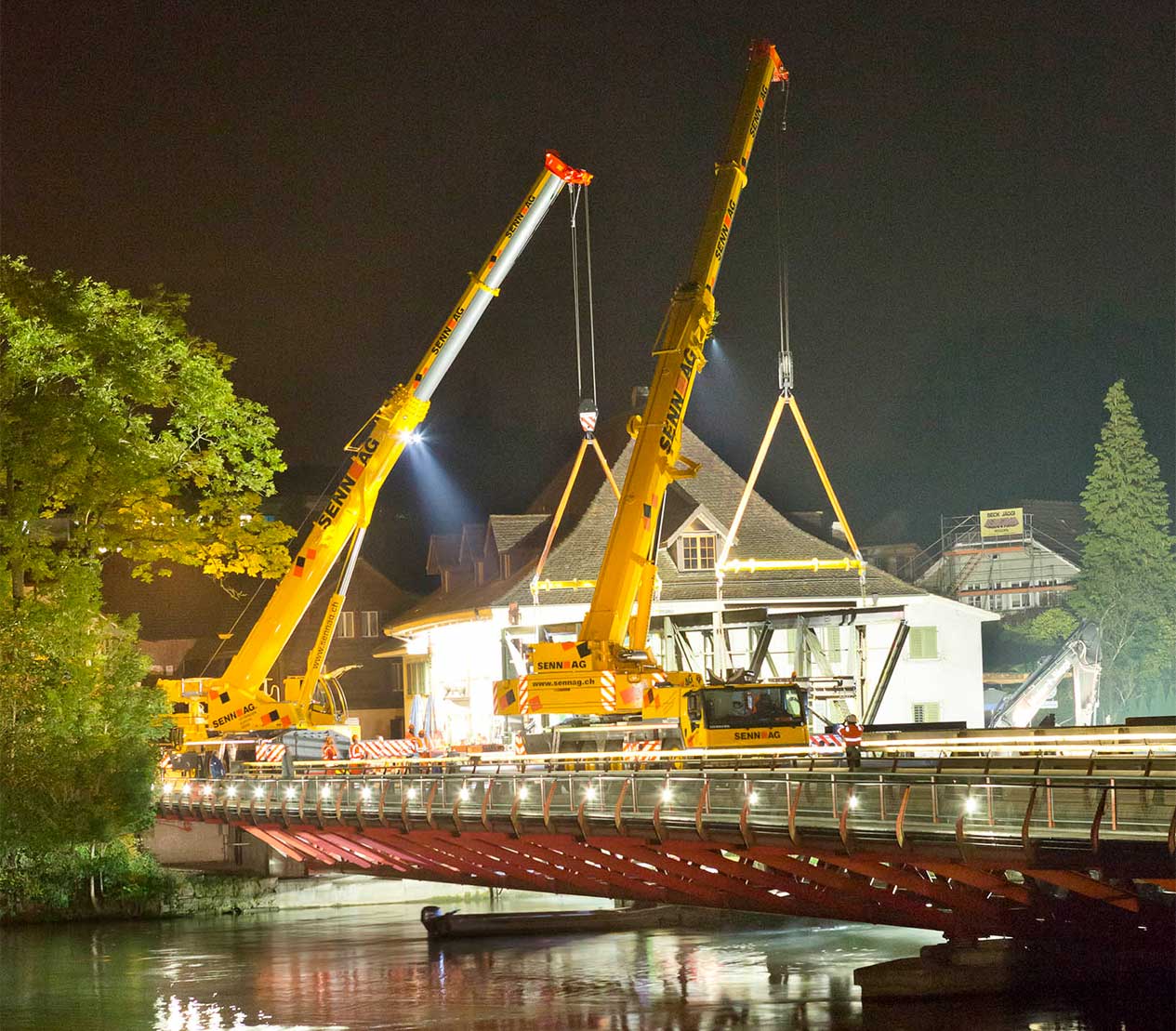 A segment of the 110-year old truss construction is dismantled.

The solution to the extremely narrow crane direction area is VarioBase – the variable support base from Liebherr. This innovative support system enables each individual crane support to be extended to an arbitrary length whilst the crane controller permanently calculates the maximum load capacity values.

Swiss crane contractor Senn completes the job with its LTM 1160-5.2 and LTM 1130-5.1 mobile cranes. Both feature VarioBase and can be erected without any problems on the narrow bridge for the night-time tandem hoists.

Load distribution plates specially made for this job were placed under the supports. These ensured that the support pressure was distributed perfectly on the bridge structure.

Senn AG positioned the cranes at the side on the edge of the road and extended their supports on the side away from the load: the supports were extended to only 19 percent of their possible extension length. On the installation side of the cranes there was sufficient space to extend the sliding struts to their maximum length.

VarioBase allows each crane support to be extended to an arbitrary length. The LICOON control's load moment limiter makes the crane's work safe.

At the same time the mobile cranes were aligned so that the telescopic booms were positioned precisely over the completely extended rear supports as they deposited the load. This allowed the two Liebherr cranes to reach maximum load capacities.

The river crossing was closed to traffic from midnight on each night. A low loader delivered one component of the new railway bridge each night, leaving it on the road bridge. Since there was neither time nor space available to set up the cranes on the bridge, they were driven to their operating point fully ballasted and with their booms erected.

The 5-axle mobile cranes were positioned at each end of the 25-metre bridge components. After attaching and lifting the load the support pressures on the crane supports were checked again before the section of around 50 tonnes of steel was swung over the river and lowered on to piers, auxiliary piers and abutments.

The crane drivers and structural steel erectors from Senn AG only needed around an hour to install a bridge segment precisely. The dismantling of the old trusts construction erected in 1906 took a total of four nights. After the work to renovate the river pier and the abutment, the new 100-metre trough bridge with closed walls, was then installed over a period lasting a further four nights. 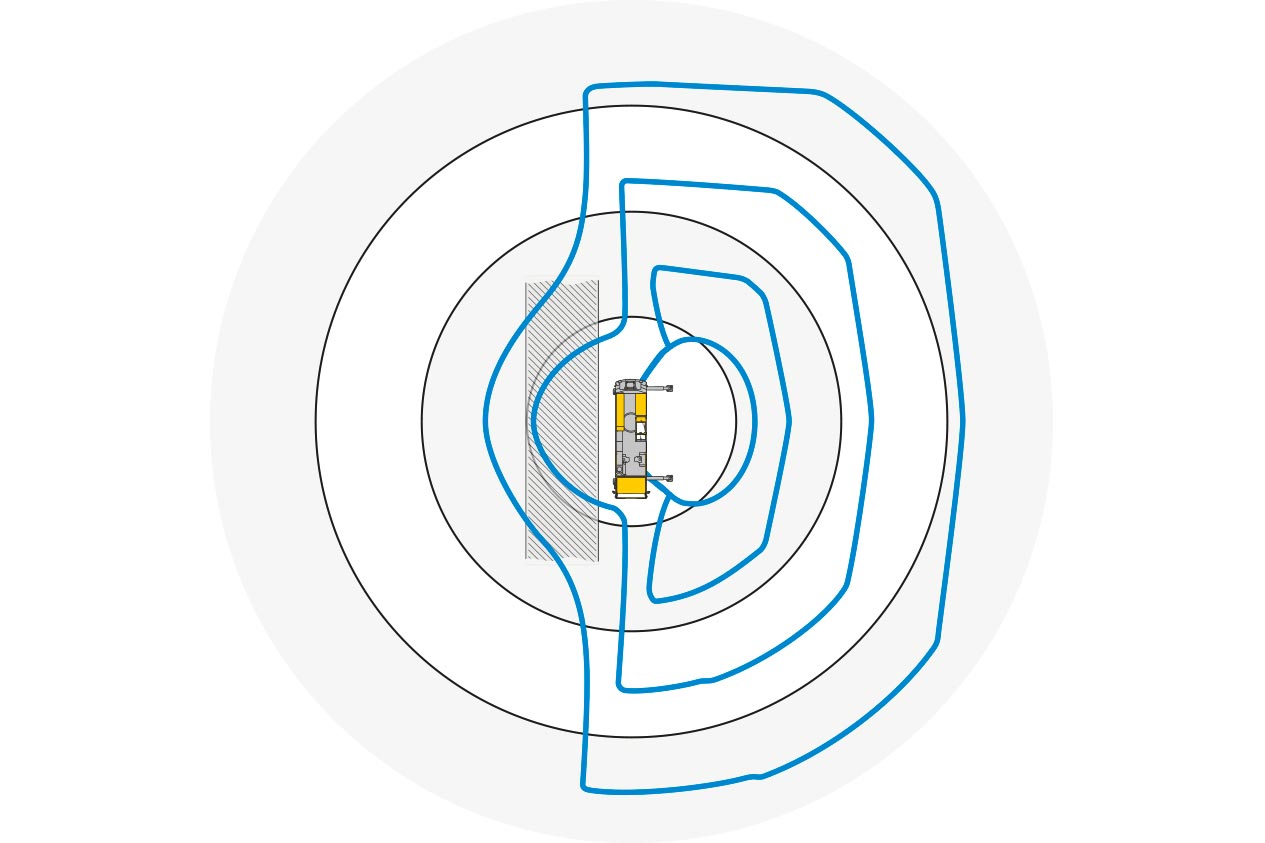 Powerful over the supports

VarioBase improves efficiency for crane jobs by increasing the load capacity. The system identifies the machine's precise centre of gravity and the tipping edges and sets the two relative to each other. If a load is hoisted over one support, the risk of tipping is lower than hoists to one side, for example. This means that the system can permit a higher load capacity and loads can be moved to a greater radius.