Construction company Reithelshöfer carried out the demolition of Nuremberg’s old post office building. The company’s new Liebherr R 950 Demolition crawler excavator was involved in improving the road layout around Nuremberg's central station. With its impressive fleet of excavators, Reithelshöfer is one of the leading medium-sized companies in Germany’s Franconian region. 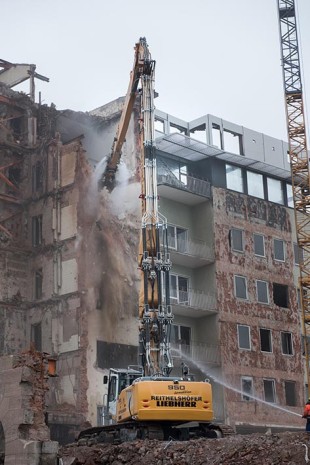 The R 950 Demolition crawler excavator developed by Liebherr-France SAS has an operating weight of 75 tonnes, including tool attachment, and an engine power of 200 kW / 272 HP, which complies with Stage IV / Tier 4f emission standards.

Purchasing from Liebherr gives customers the option of having their new crawler excavator custom made. Additional equipment and attachments can be included in the specification as required so that every machine produced is tailored to the specific needs of the individual customer. For example, a special attachment to give the R 950 Demolition crawler excavator a working height of up to 29 m was developed at Liebherr’s Colmar production site.

Driver Ralf Stingl appreciates the new excavator’s special equipment, in particular the 360° sky view camera that gives him optimal lateral and rear area monitoring. The quick-change multi-coupler systems save time by making it possible to change equipment in just 30 minutes and Liebherr spare parts can be produced and delivered quickly when required. 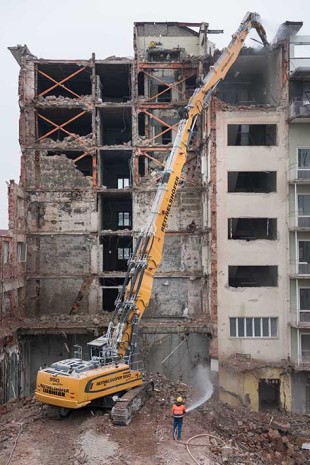 The machine already has 1,100 operating hours on the clock. Driver Ralf Stingl confirmed that the machine is in daily operation for up to 10 hours.

For Reithelshöfer, excellent quality, innovative technology and a high comfort level were key criteria in its purchase of Liebherr machines.

The R 950 crawler excavator developed by Liebherr-France SAS has an operating weight of 75 tonnes, including tool attachment, and an engine power of 200 kW / 272 HP, which complies with Stage IV / Tier 4f emission standards. Driver Ralf welcomes the increased power combined with fuel consumption that is lower than the R 944 C predecessor model. The machine already has 1,100 operating hours on the clock and Ralf confirmed that it is in daily operation for up to 10 hours.

The company previously owned excavators from other brands, then changed to Liebherr for reasons such as the operational safety. Even prior to the decision to purchase the new demolition excavator, which has been deployed in Germany since July 2017, other competitor machines were eliminated due to inconclusive test results.

The sprinkler system for the demolition equipment ensures low dust generation and a better view during demolition work.

Construction company Reithelshöfer was founded in 1966 and currently has 230 employees. It consistently provides bespoke solutions and a high level of expertise thanks to qualified staff, ongoing training and trained vehicle operators.

Based in Germany’s Franconian region, Reithelshöfer is a leader in earthmoving, demolition, raw material extraction, recycling and site waste management. Defining characteristics of the company are its use of state-of-the-art technology and the high levels of flexibility it can offer because it produces its own raw materials and can supply recycling options and building rubble landfills.